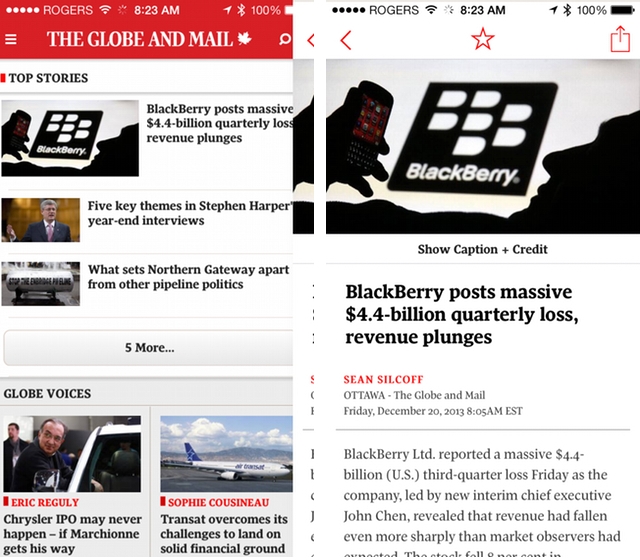 One of the more popular national Canadian newspapers has updated its iPhone app to match Apple’s visual design standards for iOS 7.

The Globe and Mail version 3.0 arrives today on iPhone, bringing a brand new full-screen reading experience that fits a lot more content on the smartphone’s increasingly small-feeling 4-inch display. Navigating through the app is much easier now thanks to an app-wide “swipe right to return” gesture that mirror’s Apple’s own system menus.

The app itself looks much cleaner, too: a lot of the clutter, such as the weather bar and login prompt, have been moved to the left “section” menu. And because it has been optimized for iOS 7, it runs a lot faster on the iPhone 5s.

Perhaps more interesting than the update itself is The Globe’s strategy around iOS in general. The company continues to update the iPhone and iPad apps much more frequently than the Android version, not only debuting new features on Apple’s platform but new revenue sources. For example, the company experimented with in-line ads on the iPhone earlier this year, and brought many of its Globe Unlimited stories to iPhone first. In contrast, the Android app hasn’t received a significant update since May, and still doesn’t fully support all of the newspaper’s growing subscriber-only content.

According to The Globe’s mobile editor, Matt Frehner, “iOS is our biggest audience. Android is still growing, but the numbers aren’t there yet.” This is a similar story across the mobile landscape, with iOS given priority in many app genres. While the New York Times offers an impressive Android app, and recently partnered with Google to bring its top stories to Newsstand, the iOS version of the app receives more updates more often. Keeping in mind Android’s growing market share in Canada, and its tendency to be loaded on phones with bigger, higher-resolution displays, it’s surprising to see iOS still so far in the lead.

Frehner says that the iOS audience, across both iPhone and iPad, is over eight times larger than on Android — though the latter has no tablet-optimized app. Android users are much more likely to visit the Globe’s mobile-optimized site, and Frehner says that web visits are much closer to parity between Android and iOS. It’s unclear where the blame should be passed, too: does Android have an app discovery problem, or are Android users less likely to use apps to obtain news? It’s possible that Android users merely resort to a much more broadly-developed app category, news aggregators and RSS readers, than iOS users, since those were the first such apps to provide native access to news feeds.