Uniiverse for iPhone curates nearby events that matter 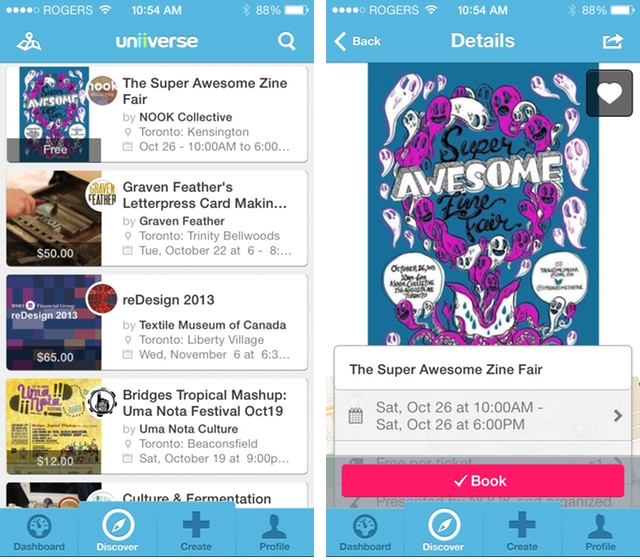 Even though it feels like the classifieds are dying, replaced by online marketplaces for practically every product and category, technology has still not solved the very human task of figuring out what to do on a Saturday night. Lots of apps purport to dig into databases and listings to find what’s happening around you, but many of them are just regurgitated lists generated by an algorithm, with no human curation whatsoever.

Uniiverse, a Toronto-based startup, hopes to change this.

The idea behind Uniiverse is pretty simple: enter your location and it shows you interesting, safe and fun activities to do around you. Some are free and others are paid, but all of them have been submitted by humans and approved by other humans.

“Our event listings are all all user generated content, [and] the common thread is that they are all unique things to do, and all involve meeting people in real life. This speaks to our vision to encourage real life interaction, given the proliferation of Tweets, Likes, Snapchats, etc,” CEO Craig Follett told me.

He likes to call Uniiverse the “eBay for activities,” where someone will automatically think to go to find something interesting or fun to do. While the emphasis is on human-to-human interaction — many of the events involve food in one form or another, the ultimate way of bringing people together — many of the recommendations are generated by linking your Uniiverse account to other social networks like Facebook, Twitter and Google’s social graph.

When a user books an activity within the app, the recommendation engine jumps to attention, aggregating others that may be a better fit in the future. Facebook itself has become the de facto activity listing dumping ground, but they get lost in the feed, and events must be created by hand. Uniiverse takes the best parts of Facebook’s events feature — its community — and brings it into an app that not only does it better but doesn’t distract with marginal content. It’s also possible to message event holders directly within the app, bridging that gap between marketplace and social network.

While home base Toronto has, as Follett calls it, the “critical mass” of event listings, there are 26,000 user-submitted activities in 400 countries, and nearly 70% of users who make a booking through the app come back a second time.

The app was recently renovated for iOS 7, introducing a flatter, cleaning design with a blue-and-white palette. Users can create events within the app, as well, and booking is done quickly and securely. There’s no word on an Android port, but the company’s web page can fill that role for now.