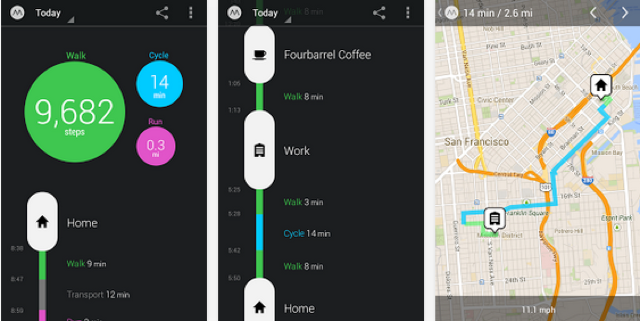 Don’t feel like wearing one of those newfangled bands, bracelets or clips to count your daily exercise?

Moves is an app that purports to do the same thing, but on your phone. The app arrived on iOS earlier this year and has proven quite a solid hit, being downloaded more than 2.5 million times. Because it runs in the background, it makes use of GPS, WiFi location and a combination of your phone’s various sensors, to create a map — both visual and numeric — of your daily activity.

Moves thinks it’s smart enough to automatically tell the difference between walking, cycling and running, and it uses location history to provide legends of where you’re moving and an approximation of what you’re doing. Sounds a bit creepy, but the data, at least for now, is kept entirely on the phone; there is no cloud syncing to speak of.

Though the iOS is further ahead in development — Moves recently released an API for developers to use its data on the iPhone — it plans to quickly bring it to feature parity. Moves supports Android 4.0 devices and above. The company says the app is very light on battery, but obviously anything that runs constantly in the background is going to affect your phone’s uptime. Keep that in mind.

Facebook is shutting down its Hello, Moves and tbh apps