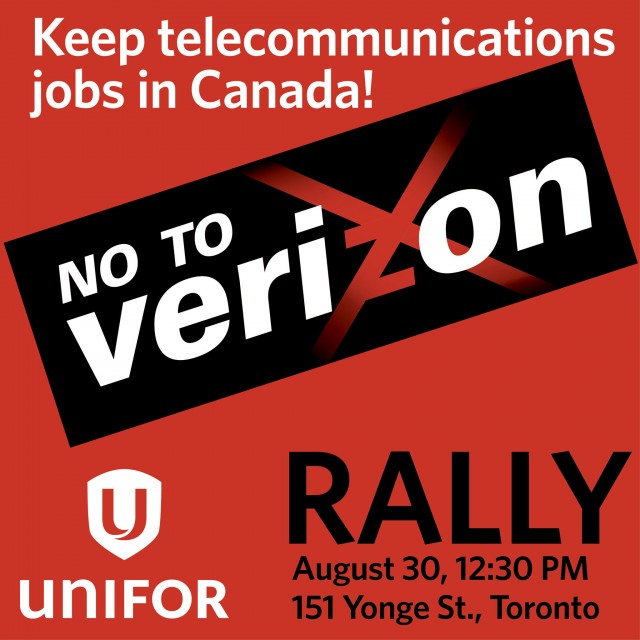 Big US-based wireless carrier Verizon has only expressed a slight interest in coming to Canada, stating back in June that “we’re looking at the opportunity. This is just us dipping our toe in the water.” Months later ,the company has reportedly scrapped its plan and put its efforts into a $130 billion buy out of partner Vodafone’s 45% stake in its business.

The Big 3 carriers are still pressing forward, hoping to close those policy loopholes, and informing uninformed Canadians and the government that Verizon doesn’t “need any handouts from Ottawa to compete in the Canadian wireless market.”

The Communications, Energy and Paperworkers Union and the Canadian Auto Workers are banded together and changed their name – now sounding very much like a WWE wrestling name – called “Unifor.” The group has organized a march/rally for this coming Friday in Toronto to let the government know that Verizon’s potential entry could “put thousands out of work.” According to CAW President Ken Lewenza, “there is the falsity being circulated right now that allowing Verizon in Canada will automatically lower costs for consumers. Not only will this not be the case, Canadian jobs are at stake.”

If you’re interested to take part in this experience then head on over to 151 Yonge Street (corner of Richmond) at 12:30pm. If you can’t partake, no worries as the event will be steamed live here.