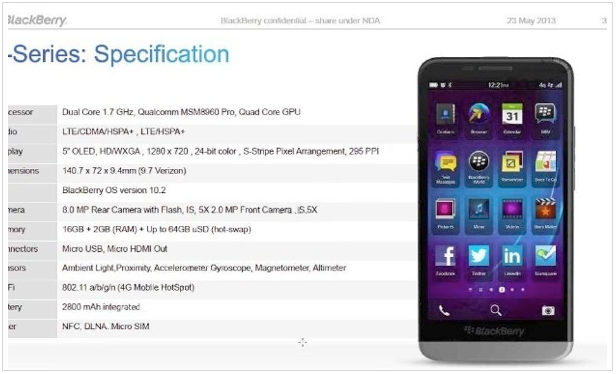 Remember when the specs of the BlackBerry ‘Aritso,’ currently pegged as being the BlackBerry A10, leaked online? This was a powerhouse that eager Berry enthusiasts were highly anticipating. The rumoured specs of the A10 sported a 4.65-inch Super AMOLED display (1080×1920 resolution), 1.9GHz quad-core Qualcomm processor, 3,000mAh battery, and 2GB RAM, with a release expected for November.

Over the past several days the A10 has appeared in both picture and video format and seems to be a larger 5-inch smartphone with design similarities to the Z10. A new image has found its way online, this time it’s apparently from a internal presentation and reveals all the important specs:

These specs are not to different that what was previously leaked online. If the slide is true, the A10 still packs a serious punch and will certainly compete for its market share – at least here in Canada. No indication of pricing or a firm launch date.