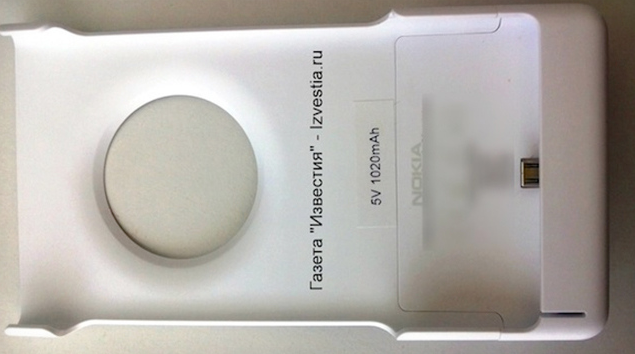 Nokia is set to unveil the latest Lumia device this Thursday, and it’s a pretty exciting addition to the lineup. Known as the Lumia ‘EOS’, and more recently as the Lumia 1020, it may look fairly similar to its contemporaries on the front, but around back there is a 41MP camera sensor, advanced optics and a Xenon flash. This is the evolution of the PureView 808.

We don’t yet know all the details, but a leaked accessory for the device depicts a battery-charging camera grip with an extra 1020mAh of juice. While it may add thickness to an already-rotund chassis, the grip will keep the camera-centric smartphone alive for longer, and considering its target market that may be a good thing. The grip apparently features a hardware camera button, makes it easier to grip the device with one hand, and has a tripod mount for more stability.

Despite running the now-defunct Symbian OS, the PureView 808 was celebrated by pro and amateur photographers alike for its impeccable lossless photo quality, excellent 1080p video performance and compact form factor. The Lumia ‘EOS’ may lack the latter quality — it is rumoured to share the same 4.5-inch LCD display as its Lumia 925 counterpart — it will certainly be a welcome addition to the Windows Phone 8 family.

We’ll know more on Thursday when Nokia broadcasts its New York-based announcement via livestream. We’ll see you there.

Source: Izvestia
Via: The Verge