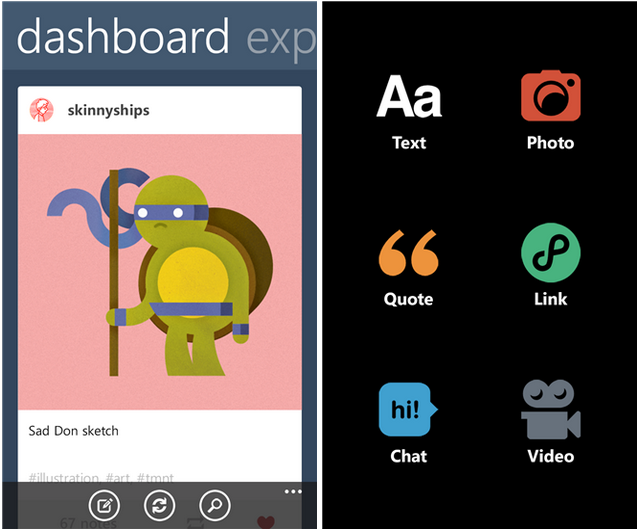 While there are plenty of third-party Tumblr clients available for Windows Phone, some of better quality than others, it’s a little surprising that the company has taken this long to bring an official app to the platform. But, like so many others, it’s better late than never with Microsoft’s mobile operating system, and the result is a clean, Metro-designed app that hits most of the right marks.

Tumblr has grown into one of the most popular destinations on the internet, and mobile devices are a contributing factor in this climb to the top. Tumblr is used for basic blogging, picture-heavy sharing, marketers and GIF makers alike, and the Windows Phone version accommodates all those use cases.

While the app performs most of the features of the iOS app, it still lacks photo sets (much like the Android version, which was recently updated with a new interface). Users can upload photos, video, text, quotes or links, and GIFs are support in-line on the stream.

Users can also pin a live tile to the home screen, which will regularly update with images from the Dashboard. The same can be done to the lockscreen, another feature unique to Windows Phone.

Overall it’s a great first effort from Tumblr and a reminder that not all companies are choosing to leave Windows Phone behind.