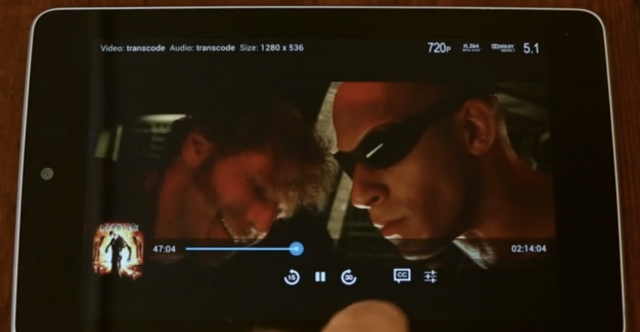 Plex is one of my favourite products. The company has transformed itself from a niche media server product that required forwarded ports and untold amounts of fiddling with settings and unwieldy menus to one of the most beautiful cross-platform products on the market.

Today, the company has announced an update to its Android app for PlexPass users, the small contingent of paying subscribers afforded premium features early. In addition to a completely new design based on Android’s Holo guidelines, the company has implemented a metric ton of new features and a much smoother overall experience.

In a blog post today, Plex founder Elan Feingold begins by excoriating Android’s former development tools, but states, “when it first came out, Android was crap.”

When we first started with Plex for Android, the edit/build/deploy cycle was glacial. So bad that when the app finally ran, you literally forgot what change you were deploying to test. That bad. Google should have focused earlier and with more passion on tooling. Empower the developers, and you’ll reap the rewards when they empower your platform. Annoy your developers, and you’ll have a software ecosystem problem.

Today, that problem is mostly solved. I can edit and deploy to my Nexus 7 in a few seconds. The x86 emulator is much faster than the emulator of yesteryear, running inside a Linux VM, on top of an emulated ARM processor (apparently nobody watched Inception). There are still annoyances, and IntelliJ’s UI designer for layouts is sadly primitive compared to Visual Studio, but it’s much, much better.

So where does that leave Android, and perhaps more importantly, Android users? In a good place, and getting better. For the first time ever, you can actually find Android software which is comparable (and sometimes ever better) than the iOS versions. As an example, I love the Lantern Campfire app. It runs in the background, notifies me of new messages, and looks infinitely better than 37 Signals’ pathetic excuse for an official app. I could go on, but our friend Aayush Arya wrote a brilliant article which I highly recommend you read. *links left in for reference

If the quality of Plex’s new Android app is any indication of how far the ecosystem — and its development tools — has come, the future of Android apps is very bright.

Plex for Android has a brand new browsing interface, with easy-to-apply filters, infinite scrolling through lists, granular bandwidth levels for movies, a new music-playing interface with gorgeous album art, and more. But perhaps the best new feature is the ability to use your Android device is a server. You can now play movies on your WiFi tablet from your phone (if you so desire) or, if your phone is space-limited, vice versa.

The new app will be available as a free download on Google Play later this week, but you must be a PlexPass subscriber to use it. Once out of beta testing, the app will become available to all existing owners of the regular $4.99 Plex app, but features like offline syncing (PlexSync, which came to iOS last year) will always be for paying customers only.

We’ll update this post when the app becomes available.