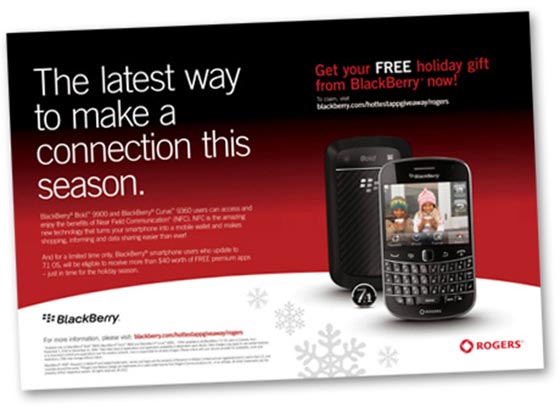 Rogers customers that take a look inside this month’s Connected magazine will find an ad that allows them to download some late holiday gifts with an NFC-enabled phone. Created through a partnership with NFC marketing company Crosscliq, it’ll let them download premium Blackberry apps, check out new details about Blackberry 10, and also download CIBC’s Suretap mobile payments app.

Crosscliq’s video makes the ad look a little bit easier to use than the much-maligned QR code of years past, which would often involve downloading a separate app, scanning a barcode and hoping for the best. However, the use of NFC might pose a bit of a problem depending on where the ads are placed; just like QR codes in a subway don’t work without cell serve, an NFC-enabled ad has the problem of needing to be physically accessible.

While it won’t be too hard for users to just whip their phones out and place them on a magazine, it might be harder to convince them to do the same on a bus shelter or billboard. What do you guys think? Would you take the trouble to use an NFC-enabled ad?