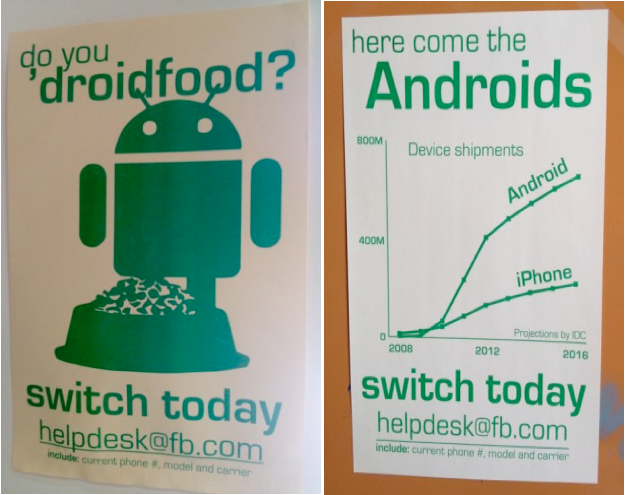 There is a reason the Facebook app for Android is terrible: most of the company’s employees use an iPhone. Until recently, the company had focused its efforts on improving its iPhone and iPad apps because there are more testers available, more resources and mindshare devoted to Apple’s platform. This can likely be said of many dev houses in Silicon Valley and the surrounding area; iOS has been the preferred development platform for years.

But bigger companies like Facebook are pushing their employees to make the switch to Android. Not only is the time right — Android has nearly 70% market share in the United States — the quality of the platform, both from an end user and developer perspective, has increased dramatically. But because the majority of Android users still run Gingerbread, and they likely won’t change for some time, the company can’t take advantage of many hardware-accelerated development tools needed to create a native app. The Android app has floundered as a hybrid HTML5/native app for months, periodically adding features to the camera or chat portions but rendering the main timeline in a web view.

This issue is not unique to Facebook. Despite its huge market presence, most app developers choose to cater to iOS version before Android. While we’re at a point where we can count on an Android version to be released, it often comes weeks or months after the iPhone or iPad.

Facebook, by asking its engineers to “dogfood” its Android app by switching to the platform, may be the first of many companies seeking to change the perspective of Android as an also-ran OS for developers. Some dev houses I’ve spoken to see Android as a necessary evil, and prefer to develop for iOS. This runs counter to the sheer numbers of devices sold, but it also speaks to the financial incentive of building an app for Apple’s platform.

Over the coming months, as Android 4.0+ devices broach the majority of overall share, we can hope to see more Holo-based Android apps with excellent performance and great feature sets. Now if only Google could ensure developers make enough money to continue building great paid Android apps, we’d be set.