For now, the Samsung Galaxy S III is the world’s most popular smartphone 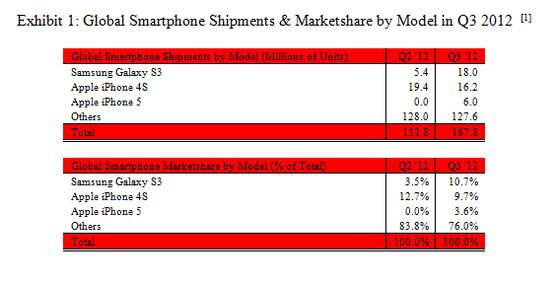 For the first time in the battle between Samsung and Apple, the former sold more of a single model in one quarter than the latter. In Q3 2012 the Samsung Galaxy S III sold more units than Apple’s iPhone 4S, a solid 18 million to 16.2 million.

While the comparison is a little bit skewed since the Galaxy S III was at its peak during the three-month period between June 30 to September 30 and the iPhone 4S was in its waning months, the figure is still impressive. Global smartphone marketshare of the Galaxy S III rose from 3.5% in Q2 to 10.7% in Q3, while the iPhone 4S dropped from 12.7% to 9.7%.

The figures don’t take into account the inevitable rise of the iPhone 5, which sold six million units in the short period between September 21st (its release date) and the end of month, but neither do they add up the millions of other Galaxy devices sold around the world. Samsung has created itself a veritable army of Galaxy-branded products, from the still-strong Galaxy S II series to the Galaxy Note II and everything in between.

Neil Mawston of Strategic Analytics, the firm behind the figures, said in a statement, “We expect the new iPhone 5 to outship Samsung’s Galaxy S3 in the coming fourth quarter of 2012 and Apple should soon reclaim the title of the world’s most popular smartphone model.” The firm attributed the rise of the Galaxy S III to its large screen, “extensive distribution across dozens of countries, and generous operator subsidies,” which have often undercut the iPhone in many markets.

The takeaway from these figures, other than the title of “top smartphone,” is that Samsung has risen incredibly quickly to take on the incumbent leader in the market, and with Android making up the majority of newly-sold smartphones in the market, the situation may be very different a year from now.