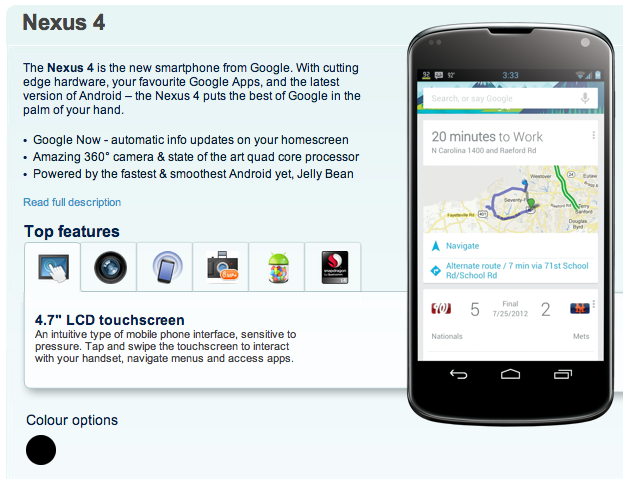 Google is poised to officially announce the heavily leaked LG Nexus 4 during their October 30th Android event. We’ve seen a number of pics surface, even an early review. Now, UK retailer Carphone Warehouse is joining the good fun and announcing every spec possible, release date, pricing, and have even put the “pure Android” up for pre-order.

In addition, the description used for the Nexus 4 says it’s “a state of the art smartphone that’s fast and premium. With super powerful hardware and the newest software, it offers the best of Google, socialising and technology.” Some of the new features that they have listed is “Gesture Typing.” wich seems like build-in Swype – “a faster way of typing that lets you spell words by dragging your finger across the screen from letter to letter.”

The price of the Nexus 4 is reportedly £389.95, with delivery scheduled for October 30th. No word yet on specific details for us Canadians.

Source: Carphone Warehouse
Via: The Verge