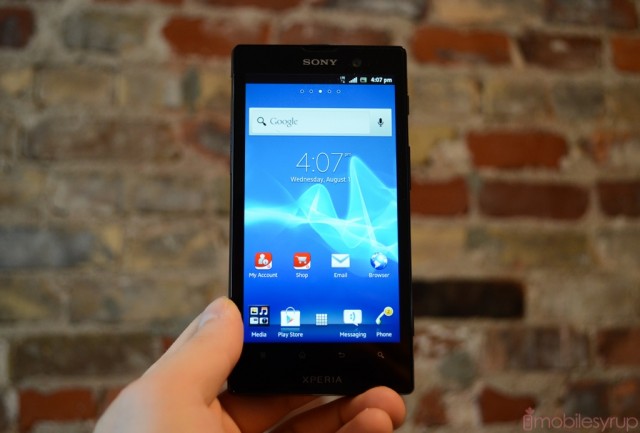 What does it take to make a great smartphone? This question has been asked thousands of times in the past ten years, from the earliest BlackBerry to the latest Android. Sony believes the answer is the sum of many parts, working harmoniously to achieve something great. Others believe it is the drive for innovation — to offer something new.

The Xperia ion hews very closely to Sony’s rather conservative mantra. Less than eight months after shedding its Ericsson moniker the company has released its first LTE device, its largest smartphone to date and, hopefully, its resurgence into the public eye. With Rogers as a launch partner, and other carriers on board in the coming months, is the 4.5-inch Xperia ion enough to take on the Galaxy S III and One X? Read on to find out.

The Xperia ion is a relatively hefty smartphone at 144g, but it commands attention with its metal backing and premium feel. Sony has wisely kept the 4.5-inch device fairly compact, and is only slightly larger than the 4.3-inch Xperia S — 5mm taller, 4mm wider and 0.2mm thicker.

There is no doubt at whom the device is aimed: the Xperia ion looks like a great business phone. There are four capacitive touch buttons below the screen as necessitated by AT&T’s fetish for a search button. Around the sides are thumb-release clip with space for a mini HDMI out and microUSB port (left) and volume rocker, power button and shutter button (right). The camera shutter, like on the Xperia S, can wake the phone from sleep, and with the Quick Shot mode enabled, hesitates for only a brief second before taking the first shot. 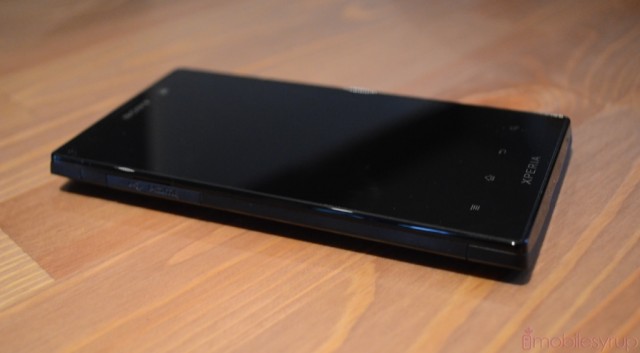 On top of the phone, alone in the centre, is the 3.5mm headphone jack, while the back houses a 12MP camera sensor with Carl Zeiss lens and small LED flash. Below that, also aligned centre, is a small mono speaker that emits tinny, sibilant audio.

The device’s metal backing looks nice — that is, before you guff it up with fingerprints and scratches. Unlike the Xperia S, which was arrayed with a lovely smooth polycarbonate, the ion’s metal sheet is hit-or-miss. At once it is sightly and stylish; but to clean it is an exercise in frustration. Scuffs and oil marks present themselves like bruises, and we worry what it will look like after a few months of hard use.

The Xperia ion has a 323ppi 720p display that really does look gorgeous. Colours have a lovely fullness to them; blacks are deep, though a little muddy; text is retina-sharp. Poor viewing angles, like the Xperia S, plague the ion, and outdoor visibility is not good. And, continuing on the road of frustration, the ion does not have an automatic brightness sensor, requiring you to adjust the visibility of the screen for every scenario. It’s one of the worst omissions a manufacturer can make for battery life and we hope this is the last Sony phone without this feature. 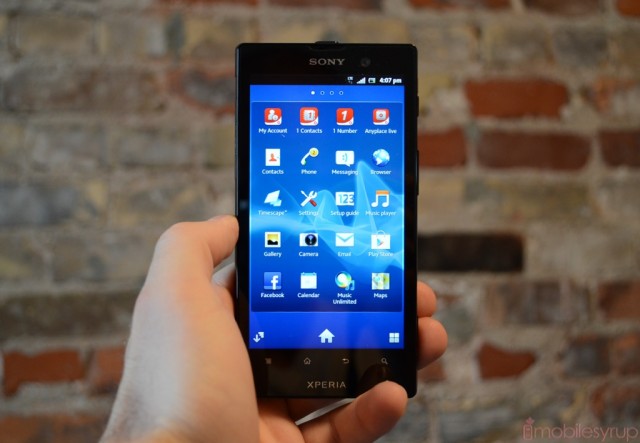 There are two major issues with the Xperia ion that, unfortunately, go hand in hand. One is admissible — the 1.5Ghz Snapdragon S3 processor is still fine — and the other a serious problem. Because the ion ships with Android 2.3 Gingerbread — at one time a powerful and capable OS, now a potential sales deterrent — it is at a huge disadvantage against other high-end Android devices. While Sony has done what it can with the software — as I said in the Xperia S review, this is about as fast as Gingerbread will ever get — it’s not enough against the sheer hardware-accelerated improvements made to Android 4.0+. Coming from a Galaxy Nexus running Android 4.1.1 Jelly Bean, the ion struggles to match it even in the most sedate of activities. As soon as Sony delivers ICS (or perhaps Jelly Bean) I have no doubt that ion will be a more competitive product.

As a smartphone, the Xperia ion is perfectly capable. The Snapdragon S3 processor is powerful enough to zip through menus, play 3D games, browse the web and quickly load apps. But that is no longer enough: both Rogers and Sony are positioning the ion as a premium handset, able to go toe-to-toe with the Galaxy S III and One X. But that just isn’t the case. It’s cheaper than both, in the case of the Galaxy S III by $110 on a 3-year term, but in both cases you’re paying for being ahead of the curve.

You’re getting Android 2.3.7 with Sony’s custom skin, which is admittedly attractive and easy to use. The company added some ICS-based features such as the ability to create folders by dragging home screen icons on top of one another. But many features are frustratingly missing, including swiping away notifications, Face Unlock, bandwidth usage controls and performance improvements. I’ve said it before: Android 4.0 was the most important update to the OS since its inception and its absence here, nearly a year after it was introduced, is not only a distraction but a concern. 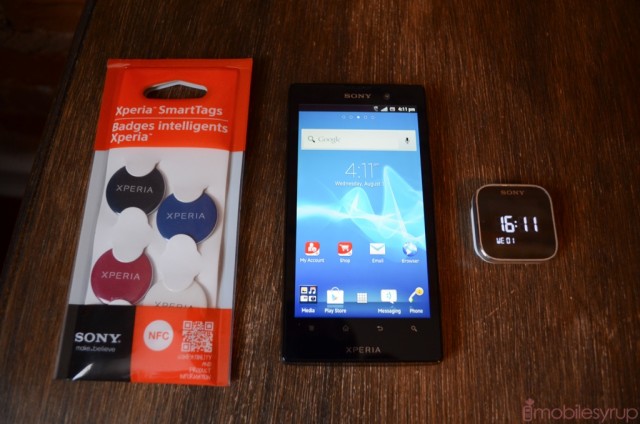 With newly-added NFC support, the Xperia ion can interact with the company’s own SmartTags, allowing users to bake in automated actions such as Car Mode and Night Mode by tapping the device against the small circular touch point. Along with the newly-released SmartWatch, which we’ll show you in a separate hands-on, and the ability to connect your device to a Bravia television to enable a couch-friendly media mode, Sony has expanded its presence in the home. We looked at the company’s new Sony Entertainment Network, the cornerstones of which are Music Unlimited and Video Unlimited, and while they provide comparable content to services as such Rdio and Google Play, they’re far more useful if you’re already entrenched in the Sony ecosystem. Playstation 3 owners, for example, may derive more benefit from both services than someone coming into the brand for the first time.

As always, there is a bunch of Rogers- and Sony-endorsed bloatware that we’d be happy to uninstall. Unfortunately the ability to do so — or rather disable unwanted apps — was introduced in Ice Cream Sandwich. While Sony has promised a swift upgrade schedule for both the Xperia S, Xperia U and the Xperia ion, we’ve yet to hear of a definitive date. I look forward to testing out a finished build as soon as it’s released. It won’t change the fact that the Xperia ion is also running last year’s battery-unfriendly Snapdragon S3 processor, but we’re more forgiving in that regard. 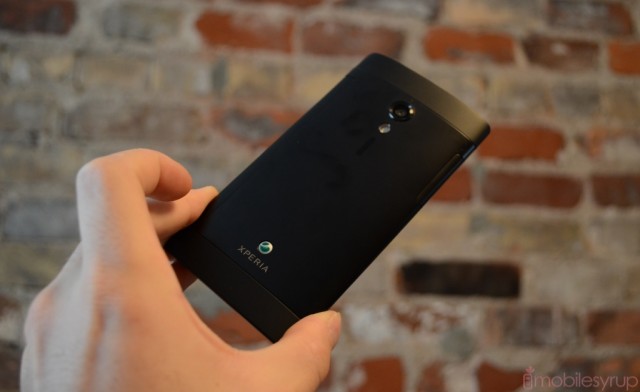 The Xperia ion has the same high-quality 12MP sensor as its Xperia S companion, and as such much of what I said there applies here, too. While the pixel count is higher than most other smartphones on the market, we were not overly impressed with the results of the camera. Photos taken with the Xperia ion are full of detail, plenty sharp and well saturated, but we found the sensor to have trouble with most environments outside the obvious well-lit scenarios. All photos had too much noise and it was apparent that Sony applied a lot of artificial sharpening to make shots look better at lower resolutions. 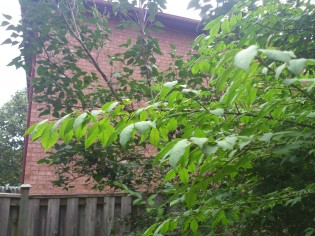 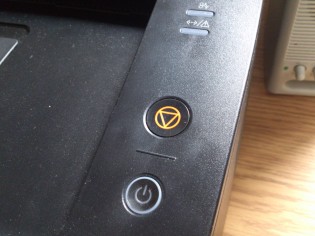 Sony’s software provides many of the touchscreen amenities we have come to expect in high-end Android phones; the controls are present when you want them and invisible when you don’t. The phone’s ability to be woken from standby by holding down the shutter button is an excellent and appreciated feature that we used a lot. The problem is that you must already be in position to take the shot as the shutter tended to be unpredictable; at times it was almost instantaneous while at others a half-second delay marred what could have been a great photo. It depended on what was happening in the background — usually music or any other intensive background task caused the delay, but it wasn’t always predictable.

The ion’s 1080p video quality was some of the best we’ve seen from a mobile device, and really exemplified the quality of the Exmor R sensor. 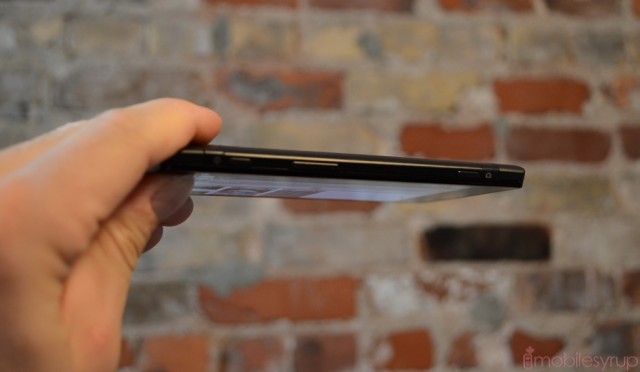 Due to the combination of a power-hungry Snapdragon S3 processor and an external LTE chip, we knew the ion’s battery life would not be great. Judging from the poor results in the non-LTE Xperia S, we braced for the worst.

The Xperia ion delivered predictably poor battery life, rarely lasting no more than six hours on a single charge. We were rarely able to go a full day of even the most conservative usage without hitting the red by 3-4pm.

While in many ways the speed increase was well worth it (just look at the next section) this is not the phone to buy if you tend towards high mobility. The Snapdragon S4, with its integrated LTE chip and 28nm manufacturing process, really raised the bar for battery life in next-generation devices, and based on the results we saw in the One X and Galaxy S III, the ion just doesn’t have the necessary hardware to match. We’re hoping that Sony can improve matters with its ICS update, but we’re not holding our breath. 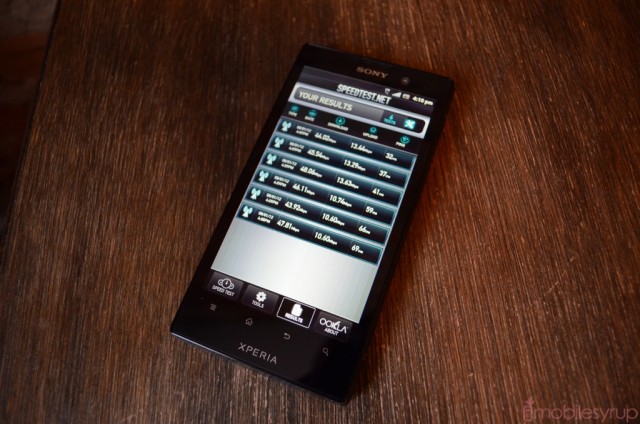 Perhaps we should give the ion a break in terms of poor battery life, as the device pulled off the fastest LTE results we’ve ever seen from a smartphone. Time after time, across multiple locations, the ion obtained over 40Mbps from the Rogers network, at times approaching 50Mbps. The results proved themselves when downloading large files or loading web pages; anything usually bottlenecked by the network was practically instantaenous. While the device occasionally struggled to load heavy web pages, it was mainly due to the aging processor and not the stunningly fast baseband.

Calls over the Rogers network were also excellent, with clear and crisp sound from both ends. Audio quality, too, was fantastic from the headphone jack, though we could have done without the anemic, tinny sound from the rear speaker.

The device comes with 16GB of internal storage, around 2GB of which is dedicated to apps. We were happy to see around 11.2GB available for media, music, photos and more. 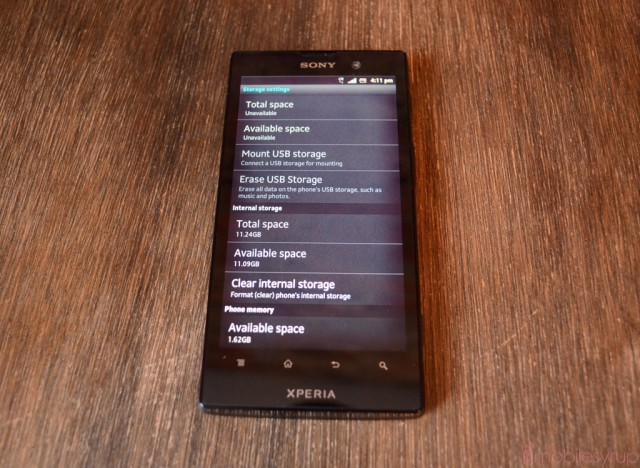 The Xperia ion, despite being a decent Android phone, does not live up to its potential. Either due to aging hardware or aged software, the combination puts it miles behind the reigning Galaxy S III and One X in terms of performance, battery life and overall usability.

We’re hoping that with an update to Ice Cream Sandwich Sony is able to significantly improve one aspect of the equation, but we’re already looking towards Sony’s next generation of devices to see what the company can truly accomplish with the Android platform. 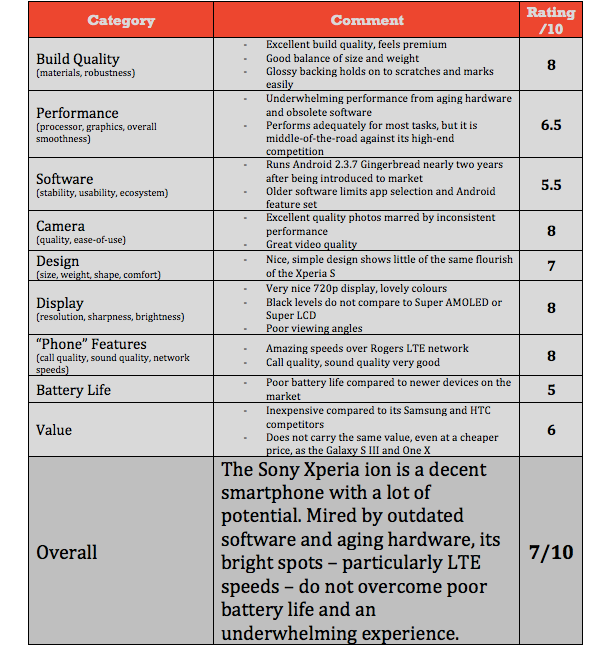