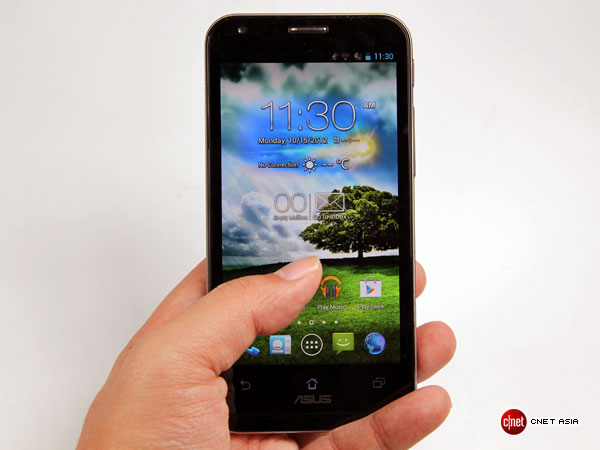 Asus announced its PadFone 2 phone/tablet hybrid today, as expected, with some great upgrades to the original and a new docking mechanism for easy insertion.

The device is now 4.7-inches and one of the first with Sharp’s IGZO screen technology. It has a 1.5Ghz quad-core Snapdragon S4 Pro SoC, 2GB RAM, a 13MP camera (the same module as in the Xperia TL), a 2140mAh battery, NFC and, in some markets, LTE support, with up to 64GB internal storage.

The docking station has also been shaved, slimmed down, and simplified. While the tablet screen maintains a resolution of 1280×800, it should be a much more capable Android machine, with far smoother transitions between phone and tablet mode, and quicker launch times for apps and games. At 649g, the tablet/phone combo is lighter than the new iPad, and is significantly easier on the forearms than its 850g predecessor.

Padfone 2 will come with Android 4.0.4 Ice Cream Sandwich out of the box, but is upgradeable to Jelly Bean, which Asus promises as soon as possible after launch.

Asus has priced its new smartphone/tablet hybrid at 799 euro for the 32GB version and 899 euro for the 64GB model, though these are obviously not carrier-subsidized or locked. While it’s unlikely the Padfone 2 will come to Canada in any form, it will be an expensive import for those looking to consolidate their phone and tablet interfaces.