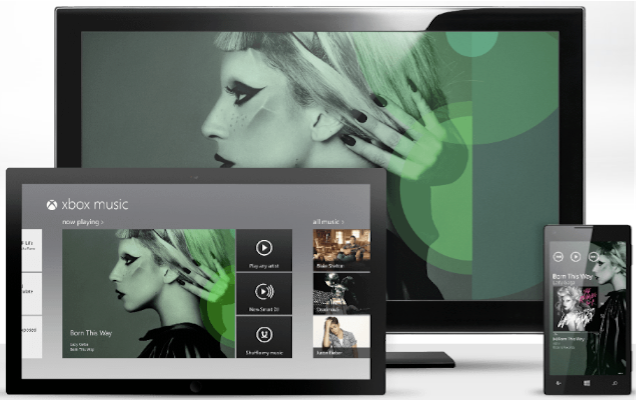 Microsoft announced today that its Windows Phone 8 and Windows 8 devices will have access to Xbox Music, a new streaming music service that promises a similar numbers of tracks to iTunes. They’re also promising iOS and Android support eventually, but Microsoft’s ecosystem will get a first crack at the $10/month streaming service.

There will also be a free, ad-supported version available to users of Windows 8 and Windows RT, while it seems that phone users will be required to purchase the $9.99/month package. Users will be able to purchase songs and save them to a cloud-based locker a la Amazon, or to cache music to listen to offline a la Rdio. The monthly service, called Xbox Music Pass, also gains you access to thousands of music videos on your Xbox 360, but you have to subscribe to Xbox Live Gold to see it.

Microsoft’s Zune Pass was one of the highlights of Windows Phone 7’s ecosystem, but it looks like its sequel, Xbox Music, is not being adapted to legacy platforms. Windows 7 and Windows Phone 7, even the upcoming Windows Phone 7.8, will not have access to the service.

Like the competition, Xbox Music will come with intelligent playlist support, dubbed Smart DJ, plus an iTunes Match equivalent dubbed CloudStorage, which will add your current music collection to the cloud, even those tracks from other services, even if it’s not available on Microsoft’s catalogue.

Canada will be one of the 22 initial markets in which Xbox Music will launch on October 26th.