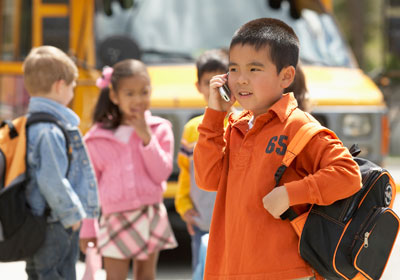 The wireless adoption rate in Canada has continually increased over the years. According to the CWTA (Canadian Wireless Telecommunications Association) there was over 26 million Canadian wireless subscribers in 2011, up from about 12 million in 2002. Projections are that we’ll hit 30 million by 2014.

A new survey has been conducted by President’s Choice Services (PC Mobile) and Leger Marketing that shows a growing number of children packing themselves with a mobile phone. The survey was completed online by 1,500 Canadians and asked what is the best age to give children their own phone? The results revealed that 52% believe the right age is between 13 to 16, while 31% thought upward of 17 years or older, and 10% believe its those in the 9 to 12 age group. Probably the most revealing stat is that 48% of parents with children aged 11 and older now carry a cell phone.

Here are some other findings from the survey, specifically on mobile etiquette and safety.

33% said they set ground rules, such as no talking while driving or walking;
32% limit use to where it’s appropriate;
27% use password protection;
18% program emergency contacts into phones and discuss when and how to use them;
12% try to conceal their phones in public;
9% set parental controls on devices; and
8% use GPS to track the whereabouts of family members.