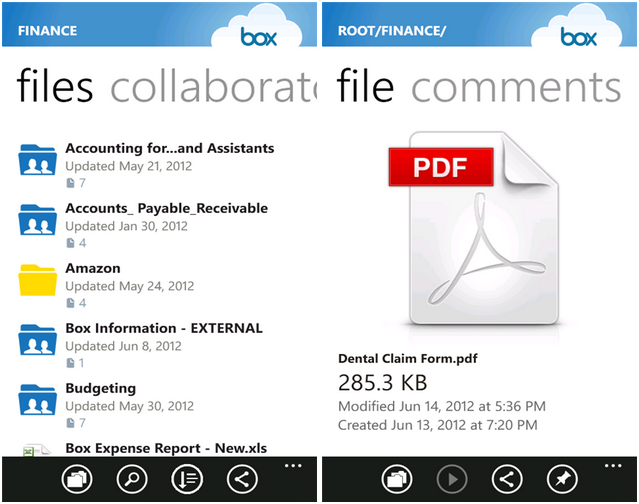 Box, formerly Box.net, has launched its Windows Phone app after months of teasing and promises. According to a company representative, despite the tiny market share, a Windows Phone app was one of the company’s biggest requests. Makes sense, since there is a dearth of cloud storage apps on the platform. Dropbox and SugarSync have yet to launch on Windows Phone, and Box sees the move as just another way of offering customers the service on every possible medium.

Aside from being drafted in the eponymous Metro stylings familiar to Windows Phone users, it is of feature parity with its iOS and Android equivalents. You can batch upload pictures and collaborate on documents within the app, but the WP version goes further and allows you to pin specific documents or photos to your home screen.

The team has yet to implement OneCloud on this version — the ability to open Box documents in other apps and save them back to the cloud — but apparently it is coming soon. Box is also collaborating with Qualcomm to offer 50GB of cloud storage to any device, whether on Android, Windows Phone or Windows 8, using a Snapdragon chipset. That includes every Windows Phone ever made and a large number of Android devices.

You can download Box for Windows Phone from the Marketplace.