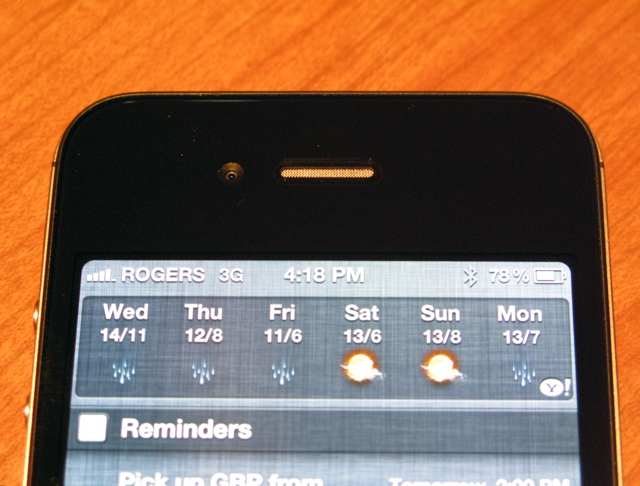 Hope you enjoyed your long weekend free of iPhone rumours because they’re back with a vengeance today.

Another report, this time from 9to5Mac, claims “[two] phones are in the PreEVT stage of development and are codenamed N41AP (5,1) and N42AP (5,2),” and are being disguised in temporary shells to avoid creating attention around the campus. This is what happened with the Samsung Galaxy S III, as the early leaks were of temporary black boxes to keep the design hidden.

The new iPhone will likely widen its aspect ratio to accomodate a new screen size and resolution: 3.95-inches diagonally and 1136 x 640 pixels, elongating the body from its current iteration. It will also take a on a 16:9 aspect ratio, making it more akin to many of the current Android devices on the market. While the horizontal screen resolution will stay the same, its vertical resolution will be 176 lines longer, allowing for more rows of icons and text on the screen. This will also let current apps work without too much alteration from developers.

The real test will be whether current apps work in landscape mode, as the new ratio will leave space on either side of the screen. While this won’t matter too much for media — either zoom in on the content or leave a modicum of black on either side for non-16:9 content — it will be more difficult to adapt current non table-based apps to work properly in landscape. Apple is seemingly developing iOS6 to work seamlessly on both “legacy” 960 x 640 resolution screens and the new iPhone screen.

Another development has to do with the dock, which is seemingly going to change from the wide Apple connector we know to a much narrower plug with a design similar to a microUSB port (without being backwards compatible, of course).

Very interesting developments out of Cupertino recently, and with WWDC coming up soon, many iOS fans are going to be excited about the prospects of iOS6 in the coming months.