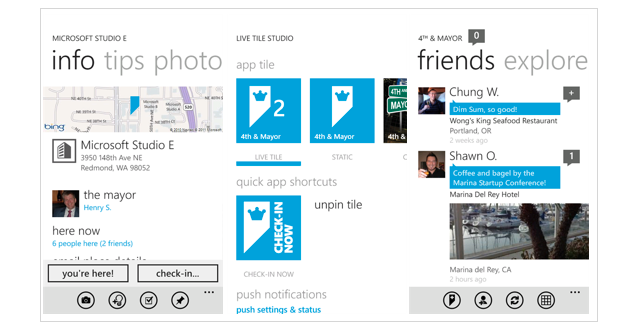 There’s been a lot of talk lately about the growth of Windows Phone in relation to the “big kahunas” in the smartphone world, iOS and Android, and whether Microsoft’s OS is gaining significant traction.

While there is a slight dearth of “hero” apps on Windows Phone, some independent developers are stepping up to fill in the blanks. In the case of 4th & Mayor, an app that ties into location service Foursquare, there is already a native app, but that hasn’t stopped Jeff Wilcox from trying to improve upon it.

A year after its release, 4th & Mayor is sitting at version 3.3, and the app has been run over eight million times in that period. There have been over 7.5 million Foursquare checkins using the app, too. Wilcox says that the app is by over 60,000 people every day, with 35k enabling push notifications on their Windows Phones.

This is nothing short of a revelation for the growing platform, and a testament to the power of word of mouth and independent developers. Wilcox says he has lots more planned for 2012, including a huge upgrade for version 3.4, but in the meantime he’s enjoying his spoils.

Wilcox says he looking to port 4th & Mayor to Windows 8 tablets when they are released, as well as broaden its appeal to international users.

Check out the great 4th & Mayor in the Windows Phone Marketplace.