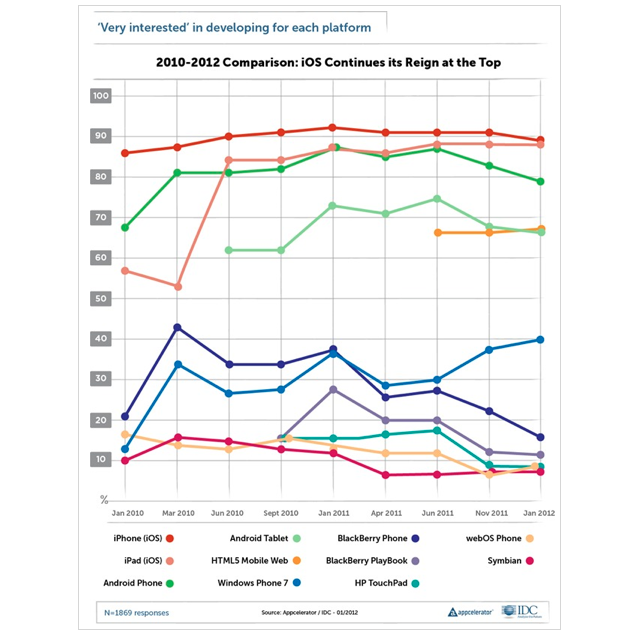 The king of the developer crown is still iOS, with nearly 90% support, but a new IDC/Appcelerator survey says that interest is rising for Windows Phone 7 and HTML5-based apps. Between June 2011 and January 2012, interest in the Windows Phone platform increased 10% to 40% which, curiously, is the same amount that Android lost in that time.

Analysts blame two things on the flip: an increased Windows Phone presence due to Nokia’s entry into the market and the increased perception of fragmentation amongst Android software builds.  This shift is not directly correlative: one cannot assume that 10% of developers plan to switch directly from Android to Windows Phone, but certainly some of them are seeing the increased relevance, and growth potential of Microsoft’s OS as a reason to move away from Google.

And while HTML5 app development has grown in recent months, most developers are not content to just build web apps; rather they seem to be intent on building certain HTML5 components into native apps for easier cross-platform translation. This has been done to great effect by developers like Score Mobile, who were able to build a Playbook app mostly in HTML5 and adapt it to the iPad in a shorter time than porting Java to Objective-C.

RIM’s fortunes continue to fall in the eyes of developers. BlackBerry OS and Playbook OS stand at 21% and 13% respectively, and both fell sharply since the last survey.

Read the full summary over at Appcelerator.