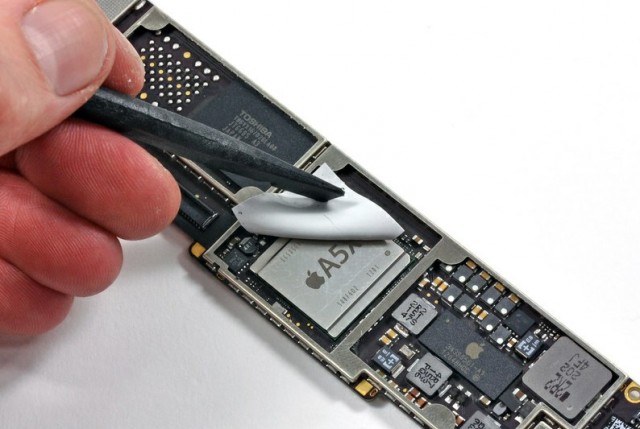 The folks at iFixit.com have come through again by “fixing” a brand new iPad before it even hits stores in North America. They go through the motions of coercing the  display off the main board using spudgers and suctions, and confirm what we previously suspected: Samsung seems to be the sole supplier of the initial batch of iPads, with LG and Sharp expected to join the fray in the coming months.

Other confirmed chips inside the new iPad are the Broadcom BCM4330 which provides 802.11a/b/g/n, along with the updated baseband and low-power Bluetooth 4.0 connectivity, as well as the dual-core A5X SoC with quad-core PowerVR SGX543MP4+ graphics processor. This also seems to be manufacturers by Samsung, putting to rest any claims that Apple has moved onto another company for their most expensive components.

In terms of battery, the new cell is a whopping 43.0Whr, 11560mAh part. This also means that the new iPad’s battery will take significantly longer to charge despite depleting in a similar timeframe to the previous model.

Check out the full stripdown in all its naked glory at iFixit.com.