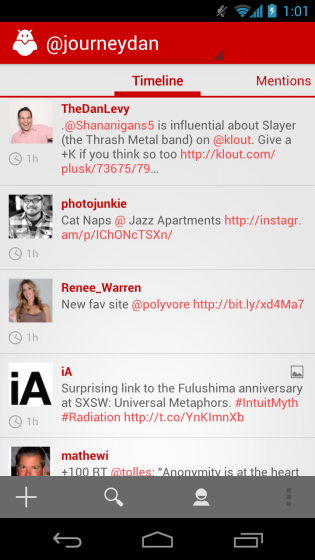 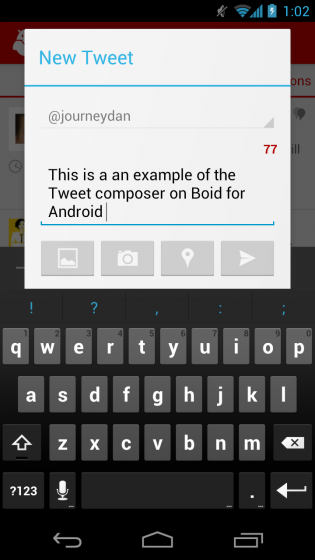 Even as an alpha, Boid for Android is shaping up to be the best Twitter client on the platform, the app that one day people will say, “Boid is like Tweetbot for Android.” And that’s exactly right.

Designed with Ice Cream Sandwich in mind, it adheres to the Holo-based theme that is thankfully becoming more pervasive among Android apps. Since Google released its design literature, it has been pushing app designers to update to Holo, with its horizonal-swipe user experience and clean user interface. If you’ve ever used Android 4.0’s Gmail app, you have seen Holo in action.

Boid has been making the rounds for a few days, but since it’s limited to Android 4.0+ devices it does not have the potential to reach the mainstream just yet. That’s a good thing, as the app is far from being ready for prime time. Instead, even in this early stage the creators are showing an attention to detail, and a willingness to adapt based on user feedback, that no other Android client can boast.

The app is lacking in a few fundamental features right now that would make it impossible to recommend it as a daily driver, but its feature set is being added to every day. You cannot currently set background updates and there are no notifications, so unless you use another app (or SMS) for your notifications you’re going to have to check the app frequently. But the developers are promising push notifications (eventually), something that is missing from even the most popular Android clients like Plume, Twicca and Tweetcaster.

There are currently five themes to choose from, and an ever-evolving litany of features, including a brand new Conversations view that was introduced, and subsequently updated, within six hours of its release yesterday. Features are being added every day, and most of them are significant; at this rate, the app should be in beta by next week, though we’d be alright with the team taking its time and making sure everything works right.

If you’re running a Galaxy Nexus, or any Ice Cream Sandwich-enabled Android phone, you owe it to yourself to try Boid for Android.