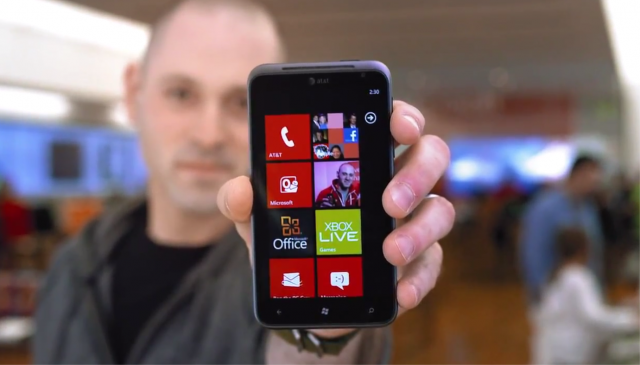 We got a glimpse of the effective Smoked By Windows Phone campaign during CES — the set of three-minute videos outlining how much faster Windows Phone is than Android and iOS in simple tasks such as posting a photo to Facebook or tapping out an email — but now it’s becoming a fully-fledged ad campaign.

Aaron Woodman, Director of Windows Phone, is not happy with where Windows Phone is sitting in the market. “The next year to 18 months is really about seeing a significant uptake in market share,” he said to Bloomberg. “It doesn’t feel like we’re really pushing apart from the competition. We need to go pick a fight.”

With 1.9% of the smartphone market share and about 2.8 million worldwide sales, Windows Phone sits below even Samsung’s Bada in the rankings. But with partners like Nokia, Samsung, LG and HTC, Windows Phone is going to rise in market share, especially competitor RIM loses a significant portion of its own user base. The only way to fight, it seems, is dirty.

The company is going to expand the Smoked campaign to television at some point, and look into other forms of viral marketing. But, truthfully, the products must speak for themselves, and needs to have marquee apps to back it up. Such is the reality of today’s smartphone world: Apple and Google have learned this very quickly. According to Woodman, Microsoft “is patient” and has enough money to be in this game for the long haul. The expansion of Windows 8 into the market, with its Metro interface, will only help familiarize users with the Windows Phone platform. The only next step is convincing users to adopt it — that’s always going to be the tricky part.