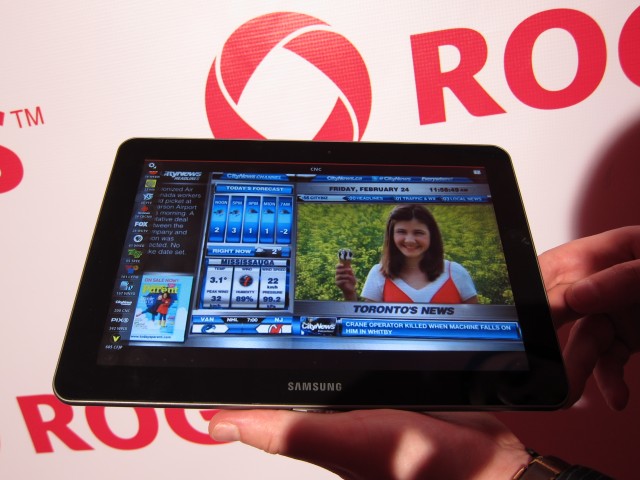 Today Rogers is introducing what they’re dubbing NextBox 2.0, an extension of the “Whole Home Entertainment” network, with an improved PVR experience. Though the rollout is mainly an improvement to the PVR aspect of Rogers cable product, they are also officially announcing and releasing Rogers Live TV, an app for Android tablets and iPad that allow you to watch 22 channels of live TV over your home’s WiFi network.

We had a chance to test out the feature during today’s launch event, and it was very cool to see live TV streamed over the air in a full tablet experience. The app was running on the Samsung Galaxy Tab 10.1 over WiFi and performance was decent to good depending on what we were doing. Scrolling through the channels is as simple as flicking down on a vertical list on the left hand side. Transitions take about five seconds, though we found the first channel to take about 10 seconds to load upon starting the app.

In the Settings, after logging into your My Rogers account, you can adjust the quality of the stream; High Quality claims to use 540MB/hour, while Low Quality uses 360MB/hour. Rogers is launching new combination TV and Internet packages, too — Silver for $86/month with the Express internet package, up to $181/month for the Diamond with Ultimate  (valid for six months on a 2-year term)– to coincide with the Rogers Live TV app release.

Unfortunately at this time Live TV won’t work over 3G and LTE, mostly because of licensing issues and not related to bandwidth restrictions. Rogers’ Dave Purdy, VP of Video Products, says that they’re actively working with all the content providers to bring Live TV to a cell-based audience, but for now the service is limited to the home network WiFi.

If you are a current Rogers TV (basic cable) or Internet customer (Express or higher)) gives you access to the iPad or Android app, and they are constantly expanding their content offerings.