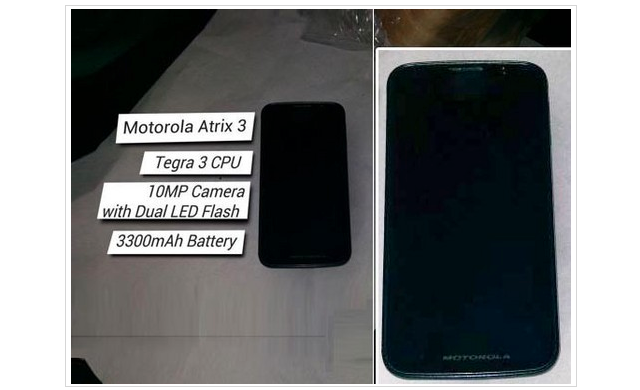 This one could go either way, but I’m inclined to believe it based on Motorola’s history. A shot of a device has leaked that purports to be the ATRIX 3, complete with a 4.3-inch 720p screen, quad-core Tegra 3 processor, 2GB RAM and a whopping 3300mAh battery.

Also note that the device in question does not have any capacitive buttons up front, which jibes with the previous render of Motorola’s Medfield-powered handset. And, since it’s about to be purchased by Google, it would make sense that future handsets would eschew those buttons for the Google-endorsed on-screen variety.

Apparently the camera has received a bump to 10MP with dual LED flashes, but we can’t see around back to confirm. The device, despite its larger size, definitely looks like it could be a member of the ATRIX family, though Canadians didn’t get a chance to purchase the unremarkable ATRIX 2. We took a look at the original a few months ago to see how it’s held up over time.