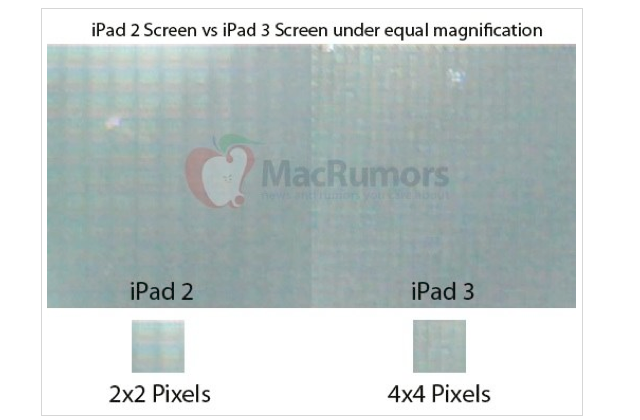 Apple is rumoured to announce the iPad 3 during the first week of March, possibly on the 7th. Specs are also rumoured to sport a 9.7-inch high-res “Retina” display, A6 processor, better cameras and 4G LTE. MacRumours is reporting that they’ve actually obtained an iPad 3 display and decided to throw it under a microscope to get an better indication of the resolution. When comparing the iPad 3 display to the iPad 2 display what was found was that the pixels looked to be one-quarter in size.

The iPad/iPad 2 has a screen resolution of 1024 x 768 and the new iPad is expected to be double that at 2048 x 1536. MacRumours said they were unable to power up the display but they “highlighted a cluster of 4 pixels (2×2) from the iPad 2 to compare it to the same area on the iPad 3. On the iPad 3, the same cluster was occupied by 16 pixels (4×4) — exactly twice the resolution in each direction”.

This changes everything. Again.
Source: MacRumours