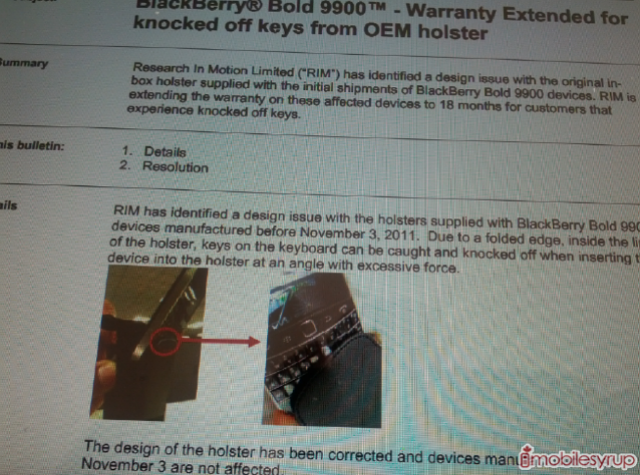 The Bold 9900 is by far the most elegant BlackBerry smartphone, well that is until the “London” officially launches. The 9900 still rocks the upscale quality of the Bold name and has the “iconic” QWERTY keyboard. It’s common to see many BB users carry their precious device in a case or a holster and clip it to their waist. According to an internal doc we received there seems to be a slight “design issue” with the OEM holster – no worries as RIM is aware and have stepped up to resolve those impacted.

Apparently some users have reported “knocked off keys” when they placed the 9900 into the holster, but is only occurring to those who purchased it before November 3rd (RIM has since changed the holster design). The doc states that “RIM has identified a design issue with the holsters supplied with BlackBerry Bold 9900 devices manufactured before November 3, 2011. Due to a folded edge, inside the lip of the holster, keys on the keyboard can be caught and knocked off when inserting the device into the holster at an angle with excessive force.”

For Bold 9900 users who have been affected RIM says they’ll “repair all knocked off keys, damaged by the originally supplied holster, for devices manufactured prior to November 3, 2011 for 18 months as in warranty repairs”.

Very good move on RIM’s part as the 9900 is currently their flagship device.
(Thanks tipster!)