“TELUS is not introducing a premium 4G LTE-only rate plan” 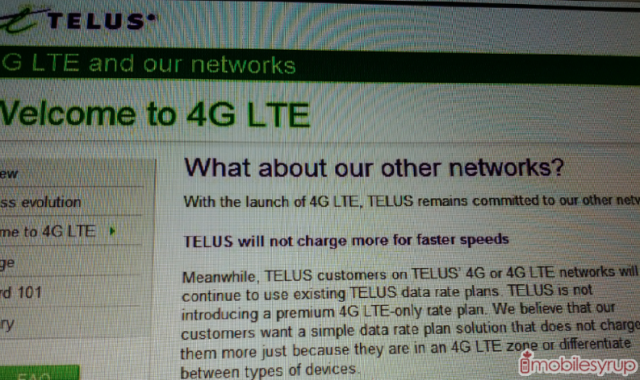 TELUS’ LTE network is coming soon, very soon. Employees have just begun training and from an internal doc we’ve received it states that “TELUS’ network evolution to 4G LTE is on track to launch in early 2012”, but most likely it’ll be live within weeks. It’s already known that they’ll be releasing the LTE-capable Samsung Galaxy Note and the Tab 8.9 – plus you’ll also probably see some internet sticks.

There are some interesting tidbits from the training docs. First and probably the most important is TELUS’ stand on LTE rate plans. The doc says that “TELUS customers on TELUS’ 4G or 4G LTE networks will continue to use existing TELUS data rate plans. TELUS is not introducing a premium 4G LTE-only rate plan. We believe our customers want a simple data rate plan solution that does not charge them more just because they are in a 4G LTE zone or differentiate between types of devices”. Very refreshing and will help drive LTE adoption. As for coverage, no specific details on areas but LTE speeds should be rolled out to similar urban areas as Rogers and Bell: Toronto, Montreal, Vancouver, Ottawa etc…