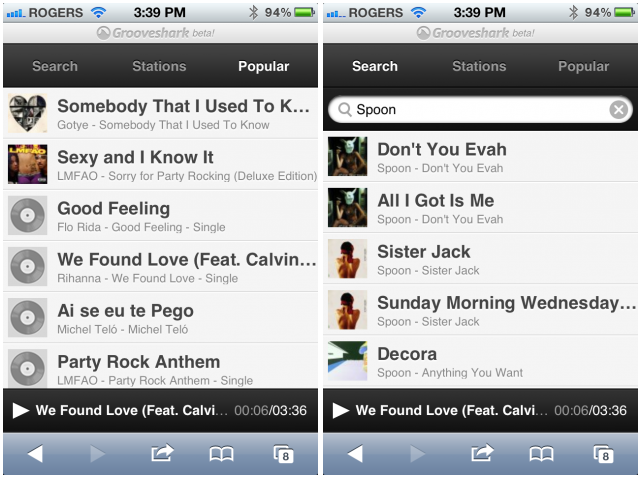 Grooveshark is the music service that will not die, despite being sued by every major music label, but it seems to be adapting to the shifting marketplace faster than its opponents can keep up.

Case in point: after being removed by Apple from the iOS App Store (and subsequently releasing the app in the Cydia store) those persistent Sharks are battling their way back to mobile relevance by releasing a HTML5 version of their mobile music player.

Currently usable on iOS, Android, Playbook and TouchPad (which quizzically leaves out just Windows Phone) it is a barebones affair — no account logins, so no playlists or cached songs — but it works quite well, with background playing support from the browser (at least on iOS). This is a testament to the future of web apps, where a company can deploy an app-like experience in the browser and not have to worry about app store guidelines.

Grooveshark is one of those on-demand music services that needs to be seen to appreciate: it’s a dishevelled and disorganized version of Rdio or Spotify, but that doesn’t mean it should be dismissed. On the contrary, there are clearly a lot of great ideas coming from this young team. Let’s hope they can stick around long enough to keep innovating.

Check out the HTML5 Player at http://html5.grooveshark.com

Source: Grooveshark Blog
Via: The Verge