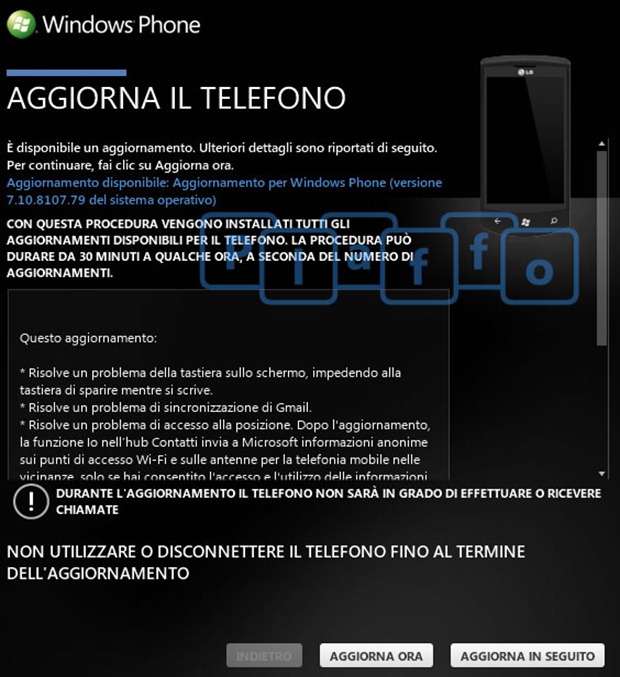 Windows Phone Mango improved a lot of things, but one aspect of the OS that got less reliable was the keyboard. To whit, it would occasionally disappear in the middle of typing a sentence, or entering a URL into the browser. Annoying, to say the least.

Well, a few months later Microsoft is getting their story in order and releasing version 7.10.8107.79 to fix, among other things, that annoying disappearing keyboard bug.

According to the Italian Windows Phone site Plaffo, the complete changelog is (in awkwardly-translated English):

– It solves a problem of the keyboard on the screen, preventing the keyboard to disappear while typing
– Resolves an issue with syncing Gmail
– It solves a problem of access to the location. After the upgrade, the function IO hub sends to Microsoft anonymous information contact the Wi-Fi access points and antennas for mobile phones in the vicinity, only if you have allowed access to and use of location information
– Revocation of certificates issued by DigiCert Sdn Bhd to solve a problem of encryption
– Fixes a problem with the e-mail related to Microsoft Exchange Server 2003. When you reply to or forward an email, the original message is now included in the response
– Fixes an issue of notification of voicemail

At the moment, only the LG Optimus 7 seems to be receiving the update, but it should roll out to all devices, across all carriers, in the coming months.