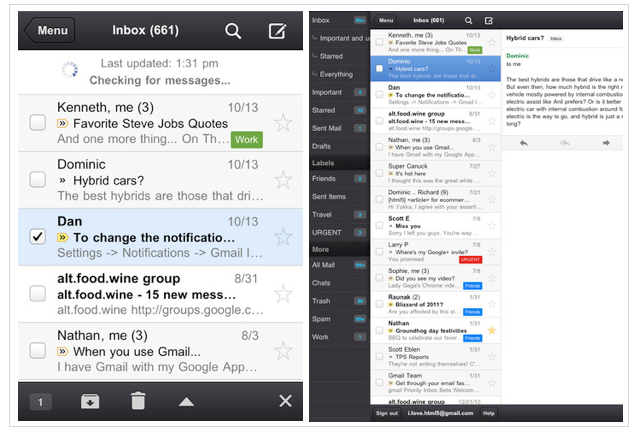 Even though iOS has had pretty good Gmail support through its native email app since day one, Google has finally released a separate app for the service, and it seems to have been worth the wait.

Along with the ability to check your email in an aesthetically-pleasing interface, the app finally allows iOS users to create a workflow with Labels, along with threaded conversations and the new Priority Inbox.

It also syncs with your existing Google Contact list for auto-completion of names. The app supports iPhone, iPad and iPod Touch, and can be downloaded via iTunes right now (though it may take a while to propagate through the entire system).

There do appear to be some issues with the app at the moment. For one, it shows an error on launch, but more severely, there are no Push Notifications. Whether or not Google will iterate quickly and fix the issues or add new features remains to be seen.

Update: Google has pulled the app, they tweeted that “The iOS app we launched today contained a bug with notifications. We have pulled the app to fix the problem. Sorry we messed up.”

Get it here via iTunes.