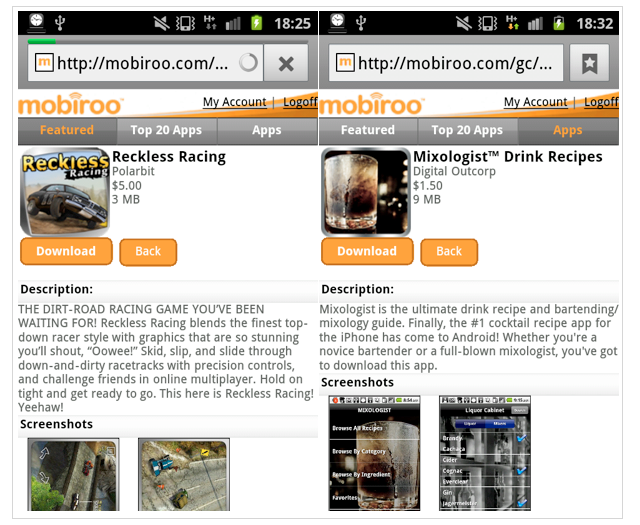 Gift cards are a symbol of a bygone time when analog ruled and retailers yielded more to foot traffic than mouse clicks. But according to Mobiroo CEO Vinay Chopra, old is new again. Mobiroo, a Toronto-based startup, recognizes the potential for gift cards in an expanding app market, and in 2010 struck a deal with RIM providing promotional paid apps to BlackBerry users. In addition to selling directly to consumers, they work directly with developers, carriers and manufactuers to bring what they call “Gift With Purchase”  incentives to millions of paying mobile customers in Canada, Europe, Australia, the United States and the Middle East.

The company sent over a card to test out, and, like most things of value it promotes the deal right on the card: for $15 you get $20 of apps. This is one of the ways that Chopra says the cards initially draw you in, by getting something something for nothing. It also makes for an excellent stocking stuffer for a game-obsessed teen.

The card itself is very old-school: Mobiroo’s logo swirling around a bunch of app logos. On the back a Daily Keno-style scratch surface with a unique PIN number. Log onto Mobiroo.com with that number, and you’re set. It auto-detects your phone — Android or BlackBerry — and smartly filters only the apps compatible to your particular model. While app selection is limited, it most of the top Android and BlackBerry apps in their official respective stores. Chopra says they have deals with many of the biggest companies in the app game, including EA Games and Namco. He emphasized that they curate the games themselves, approaching big time companies and independent outfits alike. “It’s all about quality,” he says. “And convenience, security and value.”

To that end, each app has its own DRM scheme, so it cannot be shared between devices. And the ones that come bundled with phone purchases? Devs can choose to have unobtrusive advertising inserted into the game, to further add value to its inclusion. Other than all, all paid apps are identical to the ones offered in their respective markets. 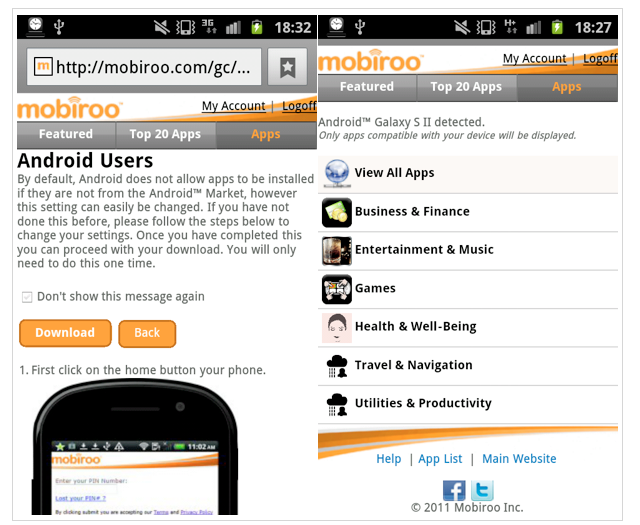 The downloading process is pretty straightforward: click on the big orange Details button next to the app, which loads a description page with screenshots and a nice summary. One you assent to pay for the app, it takes you to a disclaimer page explaining how to enable third-party app downloads on your Android device. For platform veterans, enabling Unknown Sources in the Settings/Applications menu is one of the first things to do when buying an Android phone; for the uninitiated, the procedure, though straightforward, can be frustrating and awkward. Chopra says they’re working on getting around this by developing native apps for both platforms.

Mobiroo has penned deals with retailers in twenty countries, from Canada to Australia, and aims to partner with carriers to bundle cards with newly-activated Android devices. Cards can be purchased in two varieties: $15 for $20 worth of apps and $25 for $35 worth. They make money by offering an end-to-end solution for a really common problem: what apps do I buy? Which apps are safe? Which ones are of the highest quality? The company ensures its selection, while limited, is the cream of the crop.

Earlier this year, Mobiroo was selected by Deloitte as one of the top Canadian companies to watch in 2012. They are expanding — rapidly — hoping to zero in on emerging markets through carrier billing, SMS activation and print receipt redemptions. And because most app stores require a credit card to make purchases, Mobiroo provides a safe and limited vehicle for children to obtain paid content.

For the rest of us, Mobiroo is filling a need we didn’t realize existed. You can purchase their app gift cards at Best Buy, Future Shop, Shoppers Drug Mart stores and more in Canada.

Mobiroo inks $2.49/month “All You Can App” subscription deal for Android users