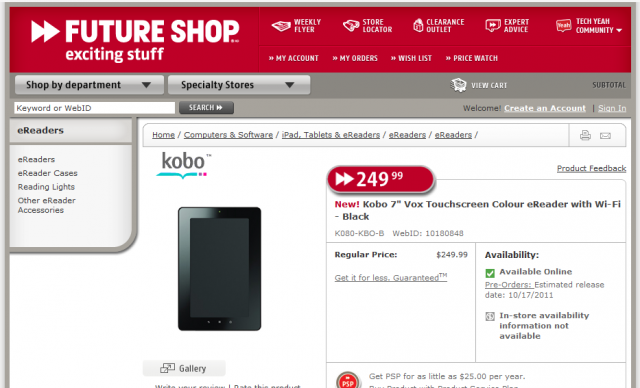 The Kindle Fire just had its big day, but don’t count out Canadian-owned Kobo from the eReader/Tablet combo fight just yet. Screenshots captured from Future Shop’s website show a 7″ 1024×600 pixel display with those unmistakable Android capacitive buttons at the bottom.

What we won’t know until the company makes an announcement shortly is whether they’ve done what Amazon have been able to pull off: marry enough desirable, and affordable, content to the hardware. At this point, unlike Amazon, Kobo is only in the book-sellers business. It would be a mistake for them to debut an Android tablet without giving users access to movies, TV shows and magazines.

One thing the leak does say is that unlike Amazon’s Fire, it will have full access to the Android Marketplace, so expect the Vox to run a more Google-sanctioned version of Android than either the Fire or Barnes & Noble’s Nook Color.

The description on the site says, “The Kobo Vox combines everything great about Kobo with amazing new features that bring your reading experience to new levels. You’ll enjoy hours of reading on the 7-inch colour display, downloading from a selection of 2.5 million titles, and even surfing the web and downloading apps from the Android market. The Kobo Vox is the eReader that does so much more.”

It’s also expected to come with 8GB internal storage and WiFi, but no 3G capabilities. We will see what happens when the Vox debuts in the next few weeks.