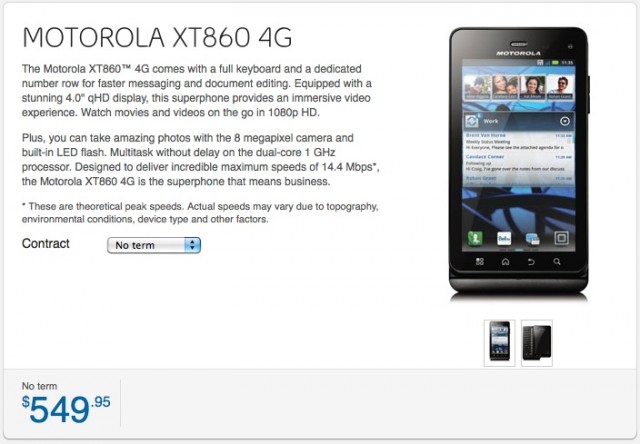 The final installment of this quarters Bell “Superphones” has been released. The Motorola XT860 4G joins the HTC Sensation, Samsung Galaxy S II 4G and the MOTOROLA ATRIX 4G. The XT860 run Android OS 2.3 and is otherwise known as the Milestone 3 or Droid 3 and comes with the familiar slide-out QWERTY keyboard. This is yet another dual-core device and has a 1GHz processor plus a 4-inch qHD touchscreen display that has a resolution of 960×540. The device isn’t the lightest at 167 grams but is dubbed the “World’s Thinnest QWERTY Slider Smartphone” at 12.9 mm thin. Other specs are that it has Wi-Fi, an 8 megapixel camera that records 1080p HD videos and also a VGA front-facing camera for video calling. Prices, this Android ranges from $99.95 on a 3-year to $549.95 no-contract.