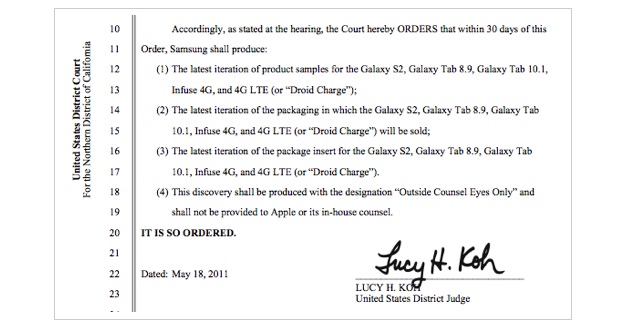 In April Apple decided to sue Samsung for copying their “technology, user interface and innovative style in these infringing products”. The products that Apple targeted were Samsung Android devices: Galaxy S 4G, Epic 4G, Nexus S and the Galaxy Tab. Samsung fired back and retaliated by counter suing Apple “to protect our intellectual property and to ensure our continued innovation and growth in the mobile communications business”. New developments have surfaced from the ongoing case as the court has ordered Samsung to hand over the latest product samples and packaging for the Galaxy S2, Galaxy Tab 8.9, Galaxy Tab 10.1, Infuse 4G, and 4G LTE (“Droid Charge”). Some of those devices have yet to be released. The court doc states that:

“Apple alleges that these new products will mimic Apple’s protected designs in the iPhone and iPad and infringe Apple’s intellectual property. Apple claims that expedited discovery will enable it to take early action to stop the allegedly infringing activity before Samsung’s new products become established in the marketplace… Apple also provides images of samples of Samsung’s new products and media reports suggesting that the design of Samsung’s new Galaxy S2 phone is very similar to the design of Apple’s iPhone 4… Accordingly, as stated at the hearing, the Court hereby ORDERS that within 30 days of this Order, Samsung shall produce: The latest iteration of product samples for the Galaxy S2, Galaxy Tab 8.9, Galaxy Tab 10.1, Infuse 4G, and 4G LTE (or “Droid Charge”).”

The Court makes a point that they are “sensitive to Samsung’s argument that production of samples of unreleased products to its competitor would be prejudicial” and that these devices will only be seen by “Outside Counsel Eyes Only” and not to Apple or its in-house counsel.