Update: Rogers to release the LG Optimus Pad on May 10th (and the Huawei S7) 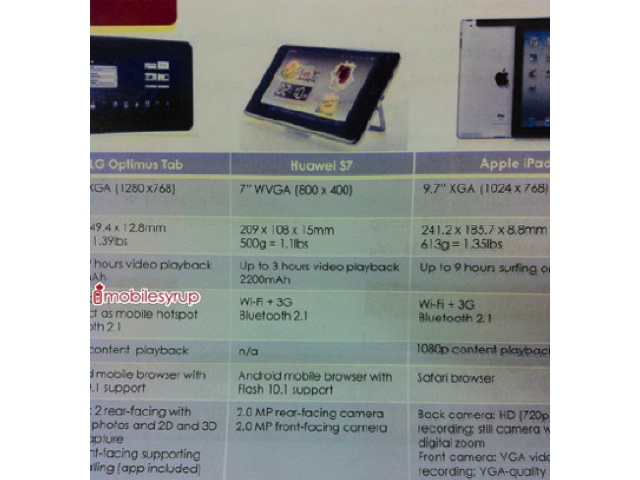 LG has been MIA over the past couple months. They’ve been waiting to see what the competition is doing and we now bring you news of one of the most anticipated product release. During the Rogers TabLife event back in January VP John Boynton stated that “we’ve seen strong tablet sales this year. Stronger than expected and we expected it to explode in the next 12 months. In fact, we expect tablets to lead our mobile internet category mix in 2011″.

The BlackBerry PlayBook launched today and is available at Rogers but we’ve been informed by one of our reliable Rogers tipsters that the LG Optimus Pad will be launching on Tuesday, May 10th. We’re waiting on official pricing but specs of this tablet comes packed with power: Android 3.0 Honeycomb, Nvidia Tegra 2 Dual-core 1GHz Processor, 8.9-inch display (1280 x 768 resolution), captures 3D content with the two 5 megapixel cameras, 1080p video playback, 32GB inbuilt memory storage, WiFi, 6,400 mAh battery.

Update: Here’s the internal doc that shows the LG Optimus Pad coming to Rogers and being compared to the Apple iPad 2 and the Huawei S7 (which Rogers will also be releasing but no release confirmed release date). Both of these will be exclusive to Rogers.