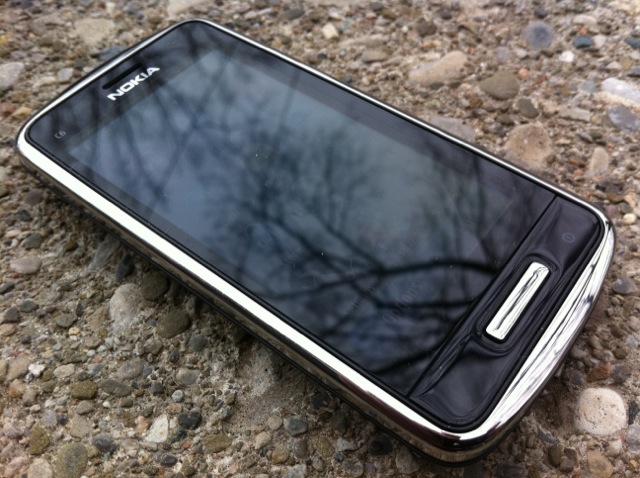 In the hopes of attracting enough attention Nokia continues to expand various lines of their Symbian^3 devices. Following up this year’s earlier release of the C6, with a new revision, distinguished by the addition of the numbers “01”. The Nokia C6-01 sports a 3.2” AMOLED capacitive touchscreen with Nokia’s ClearBlack display, which has a resolution of 360 x 640 pixels and contains multi-touch (pinch to zoom), proximity, and light sensors. The Nokia C6-01 is approximately 103.8mm (tall) x 52.5mm (wide) x 13.9mm (thick), and weighs around 131grams.

AESTETHICS:
As I stated in the Nokia C7 review, I am really fond of Nokia’s build quality. There is just something about their designs and durable feel that put them above manufacturers such as Acer, LG, and Motorola in terms of build/design quality (at least in my mind anyways). The housing for the Nokia C6-01 consists of a chrome trim surrounding the touchscreen, and a metal rear casing. The use of metal gives this device a durable feel, which is able to resist dirt and scratches quite well. One slight annoyance is the lack of a flushed joint between the front chrome trim and rear metal casing. There seems to be a noticeable ridge that could not go unmentioned. The rear and corners of the C6-01 have a nice ergonomic curve, allowing the device to sit comfortably in the palm of your hand. (As experienced with the Nokia C7, the front of the C6-01 (including the screen) is not fingerprint friendly, as the surface was susceptible to fingerprint oil, streaks, smudges, etc.) 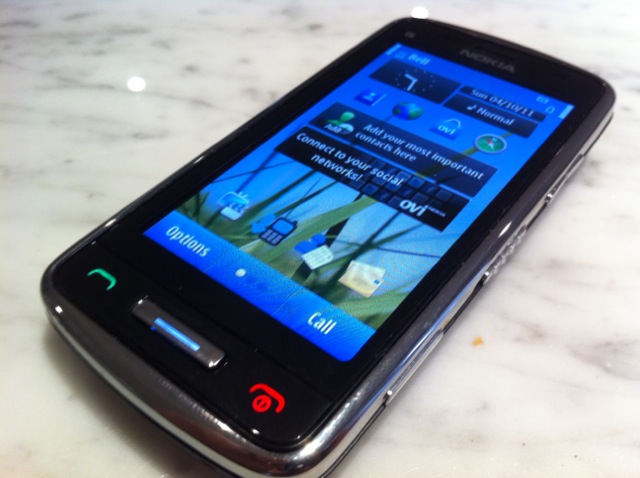 The front of the C6-01 houses a 3.2” AMOLED capacitive touchscreen with 360 x 640 and Nokia’s ClearBlack display. Above the screen are a 10mm wide speaker grill and a 0.3MP forward facing VGA camera for video calling. Below the screen are three backlit, physical buttons for Call, Menu (elongated), and End. The right side of this device sports volume rockers, a lock switch, and camera shortcut button, while the bottom of the device reveals a microUSB port for charging/PC connectivity, a small charging connector port (device also charges via microUSB port), and a 3.5mm headphone jack. It should be noted that the top and left side of the device does not house any features/buttons. 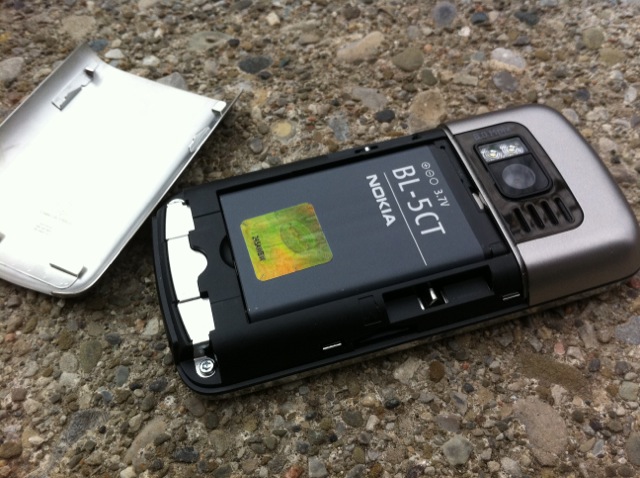 The back of the Nokia C6-01 houses an 8.0MP camera (fixed focus, dual LED flash, 720p HD video recoding, face detection, geo-tagging, 2x digital zoom), as well as a 10mm tall loudspeaker. Sliding off the back metal panel reveals a microSD port (up to 32GB support, 4GB card included), and a 1050mAh battery, which advertises up to 720 minutes of talk time, and/or 420 hours of standby time and). The SIM card slot is revealed once the battery is removed. It should be noted that for some reason, the battery does not seem to lock into the back of the phone properly (battery falls out when back panel removed). Secondly, it took me some time to finally locate the microSD port, as it was located halfway up the back of the device on the right edge. I would have liked to have seem Nokia provide instance access to this port via a protected hatch, rather than the need to remove the back panel. 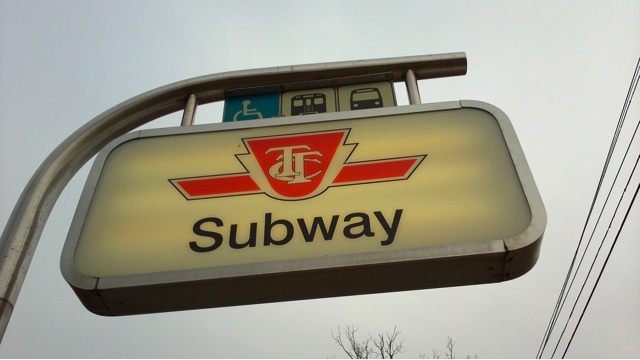 During my test calls throughout various areas of Toronto I was able to consistently make and receive calls, which sounded crisp and clear through the speaker. The quality was maintained during busier conditions where additional background noise was apparent. Similar to the C7, the speakerphone was average and could have benefited from additional volume. 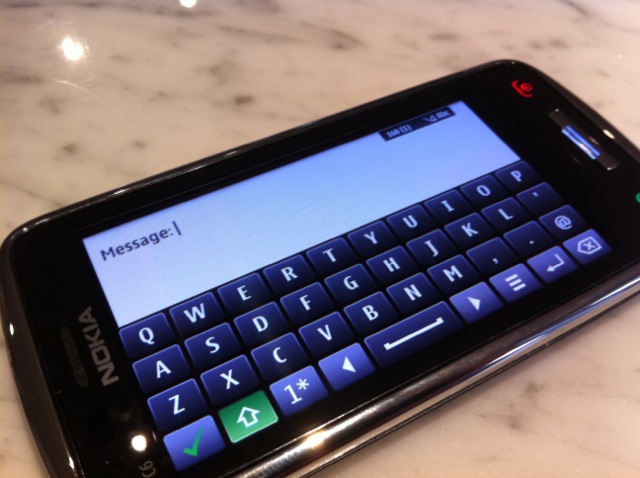 My experiences with the touchscreen and its functionality were slightly better than with the C7, as there were less instances of lag/sluggish performance, as well as an increased level of responsiveness. Once again, this Nokia touchscreen suffered from an accumulation of many fingerprint oils, streaks, and smudges. I found myself constantly wiping the surface of this device due to the slick and oily surface. Although the Nokia C6-01 was designed as a compact device, I would have preferred to have a larger screen, as the 3.2” display was not adequate when browsing the web, and watching videos. 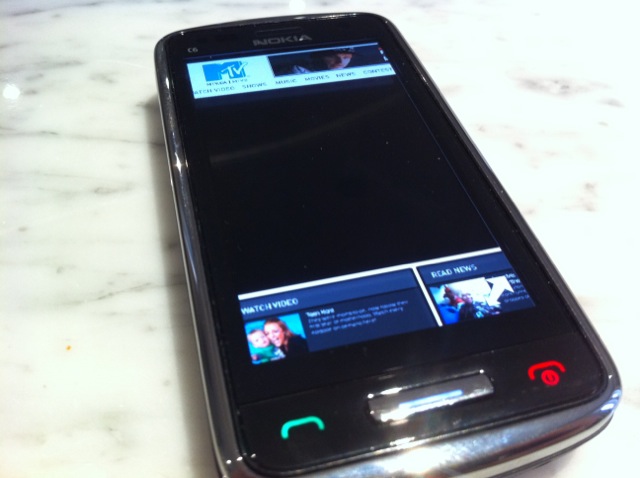 I briefly tested the web browsing experience on this device, to check if there was anything different than what I noted in the Nokia C7 review (minus the screen size). Sadly, there was nothing new to report, as the browser was very slow and sluggish once webpages were loaded, and especially when trying to pan, zoom, and input text. I found myself reverting back to installing Opera Mobile, which did alleviate most of these problems. As stated earlier, the screen size is frustrating to use when surfing the internet, as it is impossible to fit enough content on the display without considerable amounts of scrolling.

The music and video players and their experiences on the C6-01 and C7 were identical, minus the lack of DivX and XviD support on the C6-01.

It was a pleasant surprise to learn that the C6-01 has the same camera and features as the C7, which is a more expensive model device. This device had issues with focusing and colour reproduction but benefited from the vivid shooting mode. There were some capabilities to alter photos using the built-in editing software. Video recording was slightly above average, as the C6-01 is able to capture video in HD, VGA, or low-resolution formats. Although the HD video quality was slightly disappointing at 25fps, it should be noted that this device is not currently being advertised for its HD capabilities.

The 1050mAh was adequately sized for this device, and surpassed expectations, becoming the best amongst the Symbian^3 devices I have reviewed. The battery gave me two days on a full battery charge and I was using web browsing, test messages, phone calls, GPS, media playback and camera (pics and video)

SOFTWARE:
The Nokia C6-01 comes preloaded with the much despised Symbian ^3 OS. I’m thankful that Nokia will only release a handful more Symbian^3 devices before their partnership with Microsoft leads to a Windows 7 device in 2012. Symbian^3 was outlined in the Nokia C7 review, so I will not run through all the details again. I will reiterate how frustrating and inefficient the software is; opening up the main menu reveals a simplistic and plain grid of icons, which lead to various other tiers of nested menus. Much time is wasted trying to navigate to the desired section. I was hoping to have move success with the OVI app store this time around, but sadly, there must still be some kinks and bugs to work out, as I was still unable to maintain a consistent connection in order to download third party games and apps (slow and sluggish performance).

CONCLUSION:
The Nokia C6-01 is a small, compact, and durable device that suffers from sluggish and out-dated software in Symbiam^3. The touch screen is not adequately sized for daily web browsing and video playback. The structure of the OS is annoying and impractical, as it took constant navigation through nested menus to find desired locations. The media player continued to perform well, and the extended life of the 1050mAh battery was quite surprising. Hopefully, Nokia can accelerate their research and development for their upcoming Windows 7 devices, in order to prevent any delays, which might cause the release of an unnecessary Symbian^3 device. Overall, the Nokia C6-01 maintains Nokia’s continuing commitment to impressively designed devices, without any attention or changes to the out-dated, preloaded software. The $0.00 pricing on a 3-year contract is a great price point, but I am baffled as to why this device jumps to over $200 on a 2-year contract.