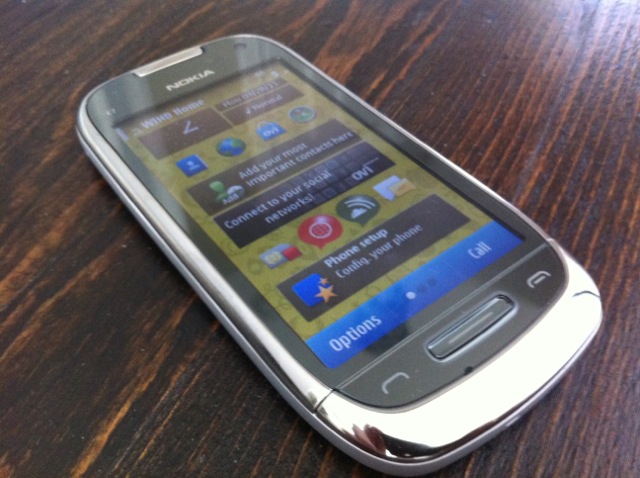 Much has been made of the competition between Blackberry, iPhone, Android, and Windows 7 devices. While less popular smartphone companies such as LG, Acer, and Motorola have chosen sides and benefited in the fight between Android and Windows OS, Nokia continues to ride Symbian^3 until their partnership with Microsoft produces a Windows 7 device in 2012. The latest addition to Nokia’s Symbian^3 lineup is the C7, which sports a 3.5” capacitive touchscreen made of scratch-resistant Gorilla Glass, with a resolution of 360 x 640 pixels AMOLED and contains multi-touch (pinch to zoom), proximity, and light sensors. The Nokia C7 is approximately 117.3mm (tall) x 56.8mm (wide) x 10.5mm (thick), and weighs around 130g.

AESTETHICS:
I have always enjoyed the quality of Nokia devices. Every Nokia phone I have handled has always felt sleek, solid, and durable and the C7 is no exception. The Nokia C7 is encased in silver plastic and metal, with curved chrome edges, and a glossy/shiny face. These curved and bevelled edges give the user a comfortable grip and feel of the device. The ergonomic feel can also be attributed to the slim and narrow profile of the device. The slim and narrow profile combined with the lightweight feel of Nokia C7 often made me forget I was carrying it in my pocket.

SIDE NOTE: The front of this device (including the screen) is not fingerprint friendly, as the surface was susceptible to fingerprint oil, streaks, smudges, etc.

The front of the C7 houses a 3.5” capacitive touchscreen with 360 x 640 AMOLED. Below the screen are three backlit, physical buttons for Call, Menu, and End. Above the screen is forward facing, 0.3MP VGA camera for video calling. The right side of this device sports volume rockers, a lock switch, and voice and camera shortcut buttons, while the left side of the device reveals a small charging connector port (device also charges via microUSB port). The top of the device houses a power button, a 3.5mm headphone jack, and a protected microUSB port for charging/PC connectivity (no features on bottom of device).

SIDE NOTE: The charging options for this device are unconventional and annoying. The C7 can charge via microUSB or wall mounted connection, however only a microUSB to USB cable is included (no USB adapter for wall). The charging connector cable forces users to toggle between cables when trying to charge device and connect to PC. 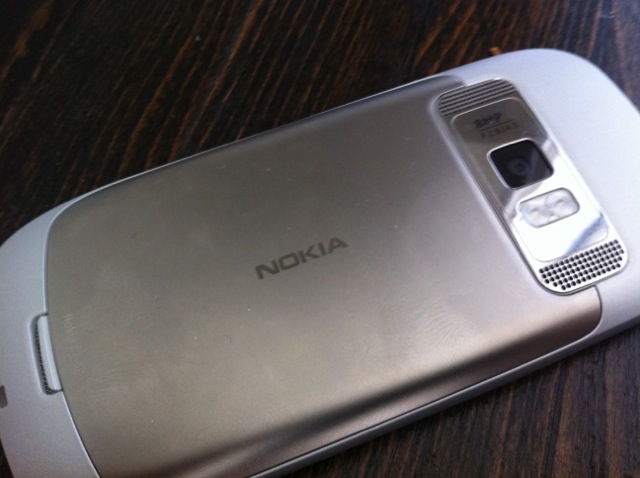 The back of the Nokia C7 houses an 8.0MP camera (dual LED flash, 720p HD video recoding, face detection, geo-tagging, digital zoom), which is surrounded by two back speakers. Pushing down the latch at the bottom of the rear, stainless steel panel reveals a SIM slot, and a 1200mAh battery, which advertises up to 576 minutes of talk time, and/or 555 hours of standby time. The microSD port is only revealed upon the removal of the battery, which is inconvenient and impractical (up to 32GB support, no card included).

I tested the reception throughout various areas of the GTA, where I was able to consistently make and receive calls, without any dropped calls. There were no complaints from both ends of various phone calls, as calls were dependably crisp, loud, and clear, even with additional background noise. The speakerphone was average, and could have benefited from additional volume.

The screen size is average, compared to other smartphones currently on the market, and provides a smooth and pleasant operating experience, as text and images appear very clear and colourful on the screen. The design of the C7 has left some wasted space above and below the screen, which could have accommodated a larger touchscreen. It should be noted that this screen needs constant cleaning/attention due to the accumulation of fingerprint oil, streaks, smudges, etc. The capacitive touchscreen was able to process most user input, with many instances of sluggish performance/processing, which can be attributed to the Symbian^3 OS and 680Mhz processor. 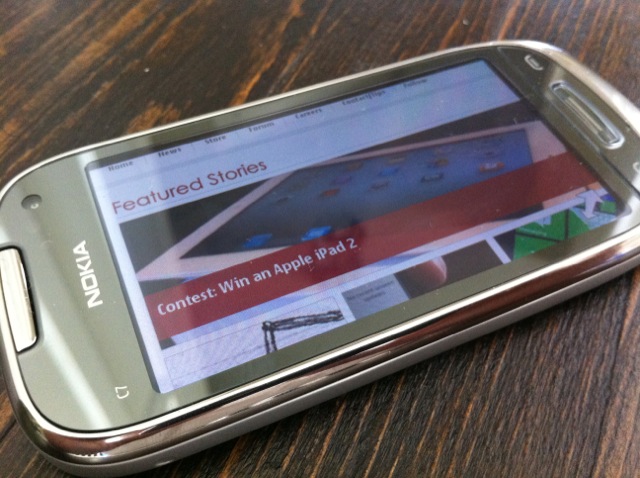 The web browser was a sluggish and frustrating experience. Various HTML webpages were easily rendered/loaded, however serious instances of lag were apparent thereafter. The “pinch-to zoom” functionality was inconsistent and unresponsive at times. “Double Tap” gestures for zooming work well, but lack auto adjusting text reflow. Navigating through the various browser settings became confusing and convoluted. One solution is to download a third party web browsing application (such as Opera), however it might lack some functionality such as multi-touch support.

The music and video player were able to handle my daily music needs and included a pleasing user interface (portrait mode reveals split screen between coverflow and tracks while landscape mode reveals coverflow display). The audio output was quite pleasant and equalizer allows for fine-tuning. The media interface also includes support for FM radio and FM transmitter, which turned out to be very handy, and something that should be included with all devices. Video playback was smooth and pleasant on the Nokia C7, especially due to the range of supported video file formats. 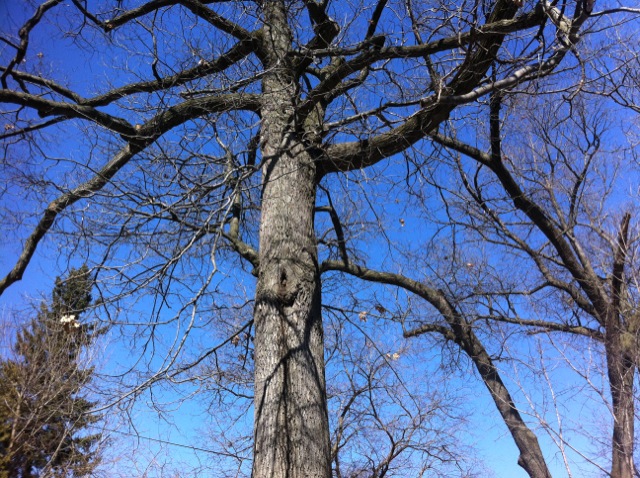 The battery size of 1200mAh was adequately sized for this device, especially since it has a touchscreen less than 4”. Through various battery tests and experiments, I was able to last just between a day and half and two days on a full battery charge; based on activities of light web browsing, test messages, phone calls, music playback, and GPS mapping.

SOFTWARE:
The Nokia C7 comes preloaded with Symbian ^3, which is the largest downfall of this device. The main setup consists of three home screens, which contain shortcuts for apps, widgets, etc. Toggling between these screens is slow and frustrating, as the device does not process swipe gestures as quickly as it should. In order to place shortcuts on the main screens, I had to navigate through various menus, rather than simple drag and drop commands, as with the Android OS. Opening up the main menu reveals a simplistic and plain grid of icons, which lead to various other tiers of nested menus. Similar to other smartphones, the Nokia C7 has social networking integration for Facebook and Twitter; however, the integration process is manual rather than automated. It should be noted that I was unable to get the front facing camera properly working in order to test video calls.

In order to input text and email, users must rely on the virtual portrait numeric pad and a virtual landscape QWERTY keyboard. Although this keyboard is not as spacious and accurate as the Android OS, it gets the job done. The dial pad is nicely spaced out, and includes smart dialing functionality, which attempts to predict who you are trying to call. The email and messaging applications are well structured and organized with added support and features. The OVI app store also experienced sluggish performance, as I was unable to maintain a consistent connection in order to download third party games and apps. The Nokia C7 also comes preloaded with other useful apps/widgets such as Paramount Teaser Trailers and E! Videos widget, QuickOffice Reader, Adobe PDF Reader, and OVI Maps,

CONCLUSION:
The Nokia C7 is a thin, sleek, and durable device that suffers from sluggish and out-dated software in Symbiam^3. The touch screen is adequately sized and very responsive, but had trouble recognizing swipe gestures due to the slower processor and OS. The media player combined with the speakers and the inclusion of FM transmitter functionality produced an enjoyable experience and pleasant surprise, while the camera captured some stunning pictures and 720p footage. This was all achieved on a 1200mAh battery, which performed well based on usage. Symbian^3 crashed a few times during review and lacked text auto reflow and proper social integration. This device could have benefited from a faster processor and a different OS such as Android or Windows 7. Moving forward, it will be interesting to see if Nokia can maintain and combine their exceptionally built devices with a more efficient and effective OS, as they continue to develop a line of Windows 7 devices for 2012. Overall, the Nokia C7 is impressively designed, and will be able to please loyal Nokia customers until their Microsoft partnership produces serious competition for other smartphone manufacturers.