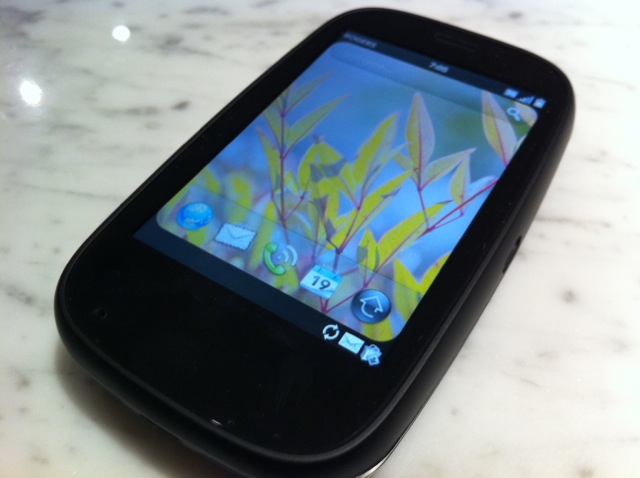 Since HP purchased Palm earlier this year, there has been minimal news/hype in regards to the release of any new devices or software, until the recent release of the Palm Pre 2. The Pre 2 sports a 3.1” capacitive touchscreen with a resolution of 320 x 480 HVGA, and a full slide-down, physical QWERTY keyboard. The screen also supports multi-touch gestures, and includes proximity, light, and accelerometer sensors. The Palm Pre 2 is approximately 100.7mm (tall) by 59.6mm (wide) by 16.9mm (thick) and weighs around 145g.

AESTHETICS:
The very first thing you will notice about this device is that it feels extremely similar to its predecessors (Palm Pre and Palm Pre Plus), except for some very minor changes. The housing of the device is made out of a soft touch material, which is easier to grip and handle than the original hard plastic casing. The second noticeable change is the screen, which is now flat and flush to the device. The original Pre had a curved plastic finish that was similarly shaped to the back of the device. The new gorilla glass screen will increase the resistance to scratches, and reduce factors such as reflections, fingerprints, etc.

The front of the Pre 2 houses a 3.1” capacitive touchscreen, with a touch sensitive “gesture” area located underneath. This area is used for navigating through the OS and phone using swiping gestures. This area is delineated with a thin line of white LED lights that pulsate when processing gestures. There is also a small hole on the bottom left side of the face of the Pre 2, which acts as a microphone. The right side of the device has an uncovered microUSB port for charging/PC connectivity. The left side of the device houses volume rockers. The top of the device reveals a 3.5mm headphone jack, as well as a sliding switch for mute, and a power/lock button. It should be noted that the bottom of the device only houses a small latch that when pressed, unlocks the battery door.
SIDE NOTE: Trying to remove the battery door actually proved to be more troublesome than expected. Often times, I had to use what I consider “more excess force” in order to unlock the latch and pry free the battery door. 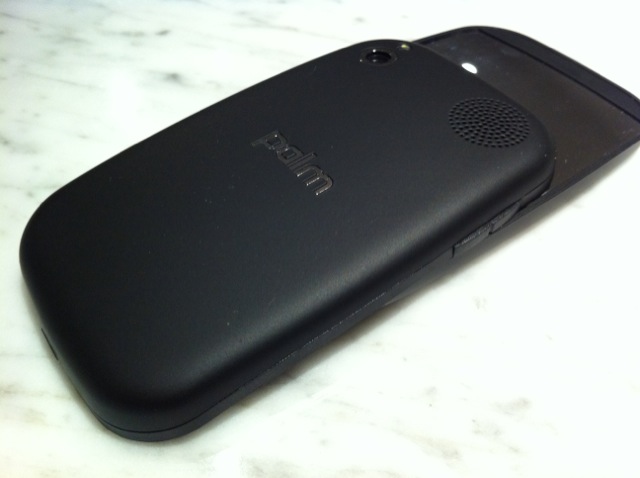 The back of the Palm Pre 2 reveals a 5.0MP camera with LED Flash (also capable of video capture and geo-tagging). Removing the back cover reveals an 1150mAh battery and SIM card slot. One of the great features about this battery is the incorporated wireless charging technology. When paired with Palm Touchstone Charging Dock accessory (sold separately for approximately $80.00), you are able to place the device on the magnetized stone, in order to wireless charge your device, while using the Pre 2 in either portrait or landscape mode. The Palm Pre 2 advertises approximately 300 minutes of talk time, and/or 350 hours of standby time. The device also has a built-in accelerometer sensor for UI auto-rotate, allowing users to toggle the display between portrait and landscape orientations.
SIDE NOTE: As with previous versions of the Pre, there is a lack of expandable memory through the use of a microSD port, which is truly annoying for users looking for additional storage past the 16GB internal memory. 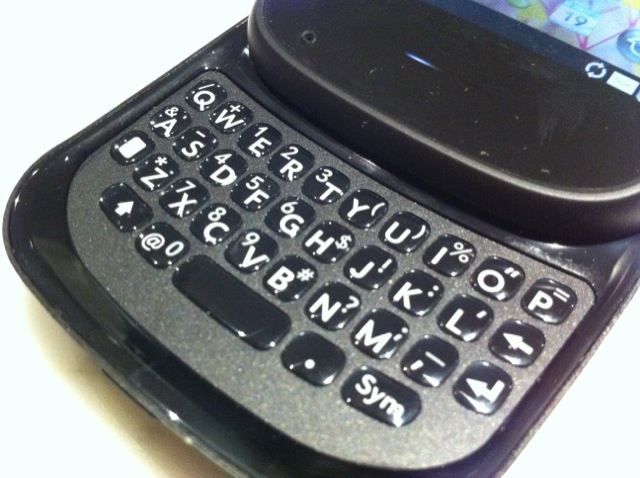 Sliding the screen up will reveal a full QWERTY keyboard with rubberized keys that are slightly raised. I found the sliding mechanism very stable and durable, and I had no concerns about wearing out the mechanism or breaking the keyboard off the screen. For my larger hands, I found that the keyboard was quite narrow and the keys very small; however, I am sure that someone with average hands would find the design quite adequate.

PERFORMANCE
The Palm Pre 2 is powered by a 1GHz processor, with 16GB internal memory/512MB RAM, and comes preloaded with the newly released webOS 2.0. The phone is powered by an 1150mAh battery, with up to 300 minutes of talk time, and/or 350 hours of standby time. The Pre 2 supports GPS, +AGPS, and Bluetooth 2.1, while housing a Wi-Fi 802.11 b/g card for Wi-Fi support. It should be noted that most new smartphones ship with wireless “N” capability for increased speeds/connectivity and the lack of support on this device is disappointing. However, the Pre 2 is capable of acting as a mobile hotspot for up to 5 separate devices (using the free Palm Mobile Hotspot App). The Music player supports MP3, AAC, AAC+, eAAC+, WAV, and AMR, while the Video player supports MPEG4, H.263, and H.264.

Making/receiving phone calls, text messages, and emails are very pleasant experiences. Calls sounded crisp and clear through the speaker on both ends of the line, and the speakerphone seemed to produce a reasonable amount of added volume. The phone interface was very user friendly, and the large buttons for dialing allowed for quick phone calls, without having to slide out the keyboard.

The touchscreen on this device was very responsive and accurate, and was able to consistently process user input quickly and efficiently. When clicking on the screen, a small icon/animation appears to symbolize the location of your input, which was very helpful to start but ended up becoming annoying once you became familiar with the device. Another annoyance was the exclusion of a virtual, touchscreen keyboard/keypad. Throughout my experiences with various touchscreen devices, I always appreciated the option of using a virtual or physical keyboard, depending on your need at the time. However, webOS 2.0 lacks this option, which means that users will have to slide out the keyboard for even the simplest of commands/input. 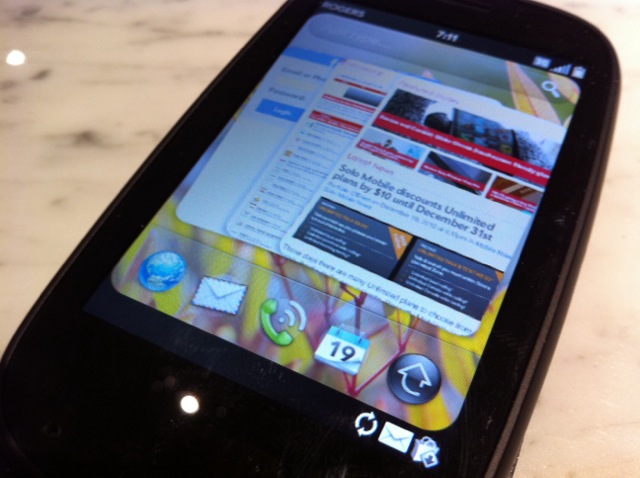 The web browser was able to load various complicated web pages quickly and efficiently. The accelerometer sensor and pinch-zoom support were very handy when you wanted to rotate the orientation of your view or zoom in. On the downside, there is no text reflow capability, so when you zoom in to read text, you will have to pan over or zoom out to continue reading, since the browser does not automatically adjust text to fit the screen. Another positive feature of the web browser is the beta support for Adobe Flash Player 10. The Pre 2 is capable of email support for IMAP, POP3, SMTP, Microsoft Exchange, Microsoft Direct Push e-mail, and Push e-mail.
SIDE NOTE: Personally, it would have been nice to have a larger screen with a better resolution, especially for web browsing, games, email, etc. (trade off between size/sleekness vs. functionality)

Although the camera on this device is 5.0MP and includes an LED flash, the Palm Pre 2 lacks auto-focus, as well as any other customization abilities since there are no apparent settings for the camera. It also would have been nice to have HD video capabilities (rather than standard video). Pictures and video captures were average in quality, but the lack of these added features was obvious, especially when compared to other smartphones on the market.
SIDE NOTE: As stated in earlier sections, there is no camera button/shortcut located on the sides or top of the phone, making the user navigate through the OS in order to use the camera (lack of convenience for spur of the moment photos).

The battery for this phone performed very well for its size, and I was able to use the phone for a little less than two full days before recharging (light calls, text messaging, browsing). It should be noted that in order to ensure that the standby time is not drastically decreased, users should monitor and toggle applications that run in the background through multi-tasking (email, GPS, etc.). When I first started using the device, I found that the battery life was draining at a quicker pace when syncing emails/loading push notifications. 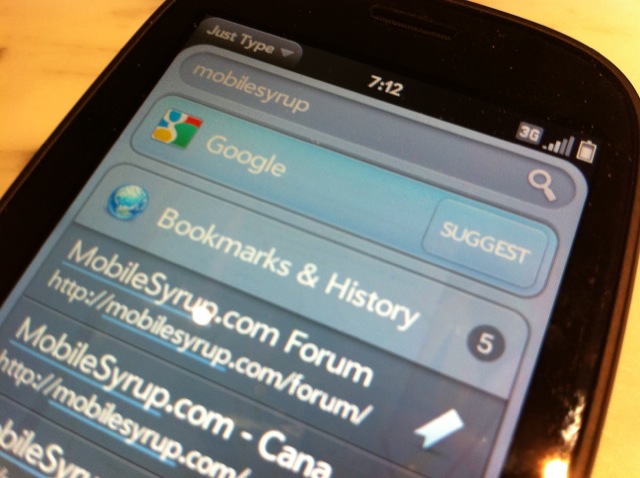 SOFTWARE
The most intriguing aspect of this device that I was looking forward to experimenting with was the new software, webOS 2.0. While navigating through the various menus and screens, I did take notice of a more refined look and sleekness to icons, menus, borders, etc. Secondly, it was apparent just how fast the OS worked on the Pre 2. Conducting searches and predictive text were almost instant, as well as scrolling and switching between menus. This is largely in part to the 1Ghz processor and “multi-tasking” functionality, which also allowed me to open various applications at the same time, without experiencing any lag.

• STACKS
− Provides organization to various “cards” that are opened when selecting external links in browser, emails, settings, etc.
− For example, if you click a link within an email message, a card for that newly opened window is stacked on top of the email card it was opened from
− Users are also capable of dragging and grouping cards into separate stacks

In the end, I had minimal complaints with the new WebOS 2.0. The OS seemed to load and operate very quickly and I found Stacks and Quick Actions to be extremely handy features. My only criticism was with the mail client, which did not support multiple messages, as well as threaded messages. These are two minor aspects that should be included in the latest smartphone devices and would like to see this resolved in a future update. The WebOS is a fresh alternative to Android, iOS, and Windows 7 and it will be interesting to monitor HP’s strategies and future products going forward. 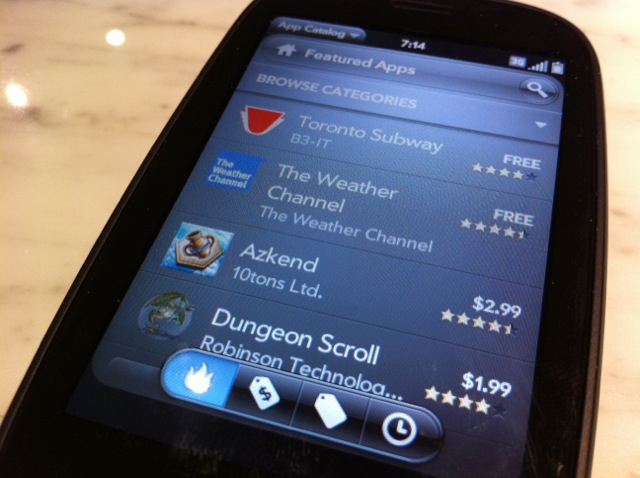 CONCLUSION
Overall, the Palm Pre 2 is a nice little sleek device that packs a strong punch in its OS. With many larger and bulky smartphones currently on the market (HTC series, iPhone, etc.), this device is a nice alternative for users looking for a more compact solution. Although I found the keyboard small and narrow (due to my larger hands), the keyboard provides the functionality of quick typing, without compromising shape and size. The main thought on my mind throughout this review was the lack of major changes to the look and feel of this revised Pre device. Personally, I would have liked to have seen more evolution in the actual hardware and design/build of the Palm series, especially since this is the first release of the new era of HP-Palm. That said, the OS was a large step in the right direction and will hopefully remind consumers not to count out HP/Palm when in the market for a new mobile device. This device is very affordable, and I am looking forward to see what HP and Palm have in store for the new year of 2011.