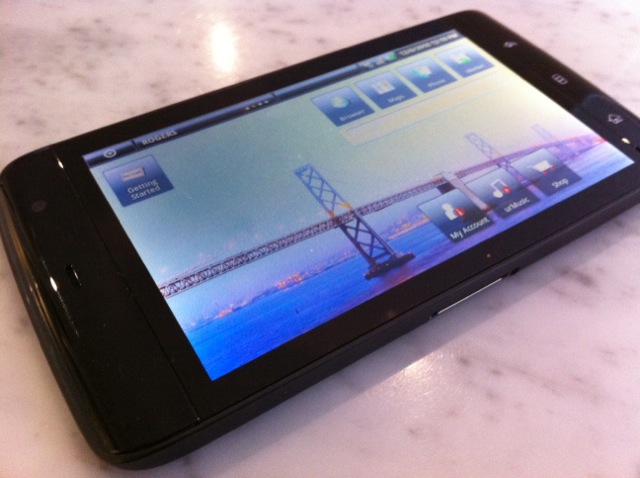 With the growing success of Apple’s iPad and increasing demand for “on the go” media, many competitors are looking to expand their product lines into the smartphone and tablet markets, in order to generate increased revenue. Enter Dell, and their much anticipated tablet/smartphone, which sports a 5” TFT capacitive touchscreen, with a resolution of 480 x 800 WVGA. The Streak is approximately 79.1mm (tall) by 152.9mm (wide) by 10.0mm (thick) and weighs a somewhat hefty 220g.

AESTHETICS
When you first pick up the Dell Streak, you will notice its obscure size, shape and weight. This device balances the scale between a smartphone and tablet, which is apparent in many of its specs. The 220g weight is heavy for a smartphone, but light for a tablet. The Streak is built solid and feels very durable, as it is covered in a black, scratch-resistant plastic. The front of the device houses a 5” inch TFT capacitive touchscreen built of Gorilla Glass, which is very large for a smartphone, but small for a tablet. Above the screen is a front facing VGA camera for video calling. Below the screen are three soft keys (home, menu, back), as well as an earpiece and microphone. The top side of the Streak houses volume rockers, a 3.5mm headphone jack, power and camera buttons.
SIDE NOTE: I was only able to wake the device by pressing the “power” button when the device was sleeping, which was very annoying since the power button is very small and similar to the camera button. Hopefully there is an option in the settings that I could have overlooked. 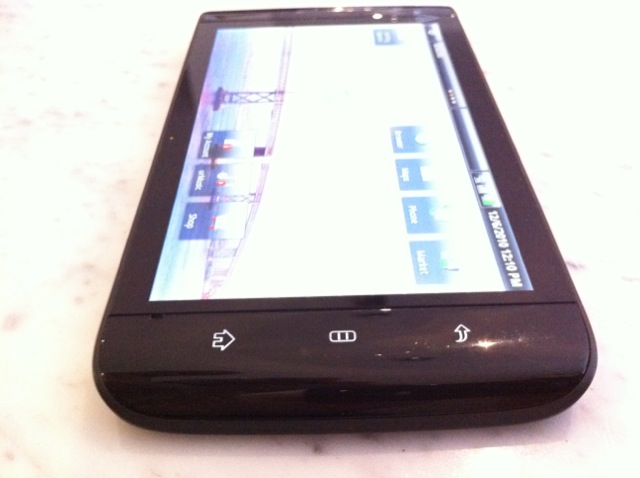 The bottom side of the Streak houses a 30-pin connection for charging. The back of the device supports a 5.0MP camera with LED flash, and a small speaker grille. Removing the battery cover reveals a microSD port with the standard 32GB support (16GB microSD card included). The Streak comes with a massive 1530mAh battery, which advertises 588 minutes of talk time, and/or 400 hours of standby time.
SIDE NOTE: Sliding the battery door off will automatically turn the device off, even if the battery is still intact (safety precaution).

The device has a built-in accelerometer sensor for UI auto-rotate, and allows the user to alter the display when browsing the web, navigating through menus, etc.
SIDE NOTE: I could not make the main home screen rotate to the landscape position, and experienced this problem within certain screens. It would be nice to have the ability to rotate any screen desired. 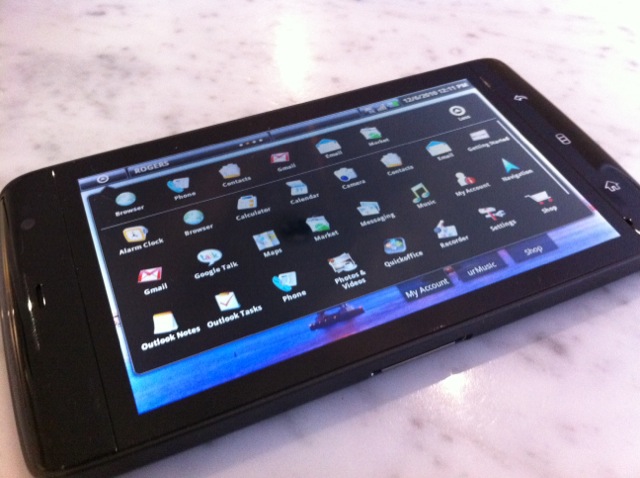 PERFORMANCE
The Dell Streak is powered by a Qualcomm Snapdragon QSD8250 1GHz processor, with 512MB internal memory, and comes preloaded with an outdated Android 1.6 OS. Rogers and Dell have promised that the Streak will be upgraded to Froyo 2.2 in the coming weeks, which will provide support for multitouch gestures, multiple email inboxes, live wallpaper, and Flash video. This device supports HSPDA 900 / 2100 and HSPDA 850 / 1900 / 2100 MHz networks, and advertises network speeds of up to 7.20 Mbps (download) and 5.76 Mbps (upload). The phone is powered by a 1530mAh battery, with up to 588 minutes of talk time, and/or 400 hours of standby time. The Streak supports GPS, +AGPS, and Bluetooth 2.1, while housing a WiFi 802.11 b/g card for WiFi support. It should be noted that most new smartphones ship with wireless “N” capability for increased speeds/connectivity and the lack of support on this device is disappointing.

The call quality of the Streak was stellar and I received many compliments on how crisp and clear my voice sounded over the phone. Incoming calls also sounded clear through the speaker. The touchscreen on this device was very responsive and impressive and quickly processed my input. I tested the accuracy through gaming/messaging activities and navigating through the various menus; however, the only problem that I encountered was typing on the virtual keyboard, which is an important feature since there is no physical keyboard as an alternative. The number pad on the right hand side of the screen forces the user to stretch their hands across the keyboard in order to reach each key for input while holding the device securely in both hands. Secondly, the keys are very small and it is difficult to enter your desired text. If the screen size was slightly bigger (such as Galaxy Tab or iPad), then there would have been more room to properly space out the keyboard. The web browsing experience was quite pleasant on the Dell Streak. The device seemed to load many pages quickly and efficiently, except for pages with Flash video content, which will be included in the Froyo 2.2 update. It should be noted that although the Steak might be considered some sort of “tablet”, the web browser defaulted to load mobile versions of many websites. 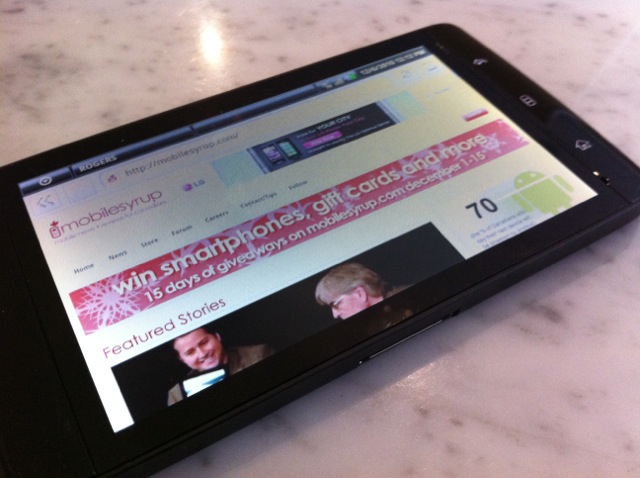 SOFTWARE
As stated earlier, the Streak comes preloaded with Android 1.6 with promises of an immediate update to Froyo 2.2. This device has many apps already pre-installed including Maps, Gmail, YouTube, Amazon, Facebook, etc. The use of four separate home screens allows the user many levels of shortcuts and customization. I attempted to test the video calling using the FRING app (which can be found in Market), but was unable to properly get a video call going (Rogers website states video calling is not supported).
SIDE NOTE: Some apps on the Streak did not like the screen size and landscape orientation of the 5” screen. I think that in time, as more of these types of devices are released, more developers will include the proper support and UI.

CONCLUSION
Overall, the Dell Streak lived up to most of its hype and I would welcome more of these devices in industry. However, issues relating to battery life, UI, and size must be addressed in order to satisfy and tempt future consumers. Personally, I would only purchase this device if I could use it with one the Canadian wireless carriers’ various $10 data add-on options for tablet devices. The Streak is too awkwardly shaped to be used as a phone on a daily basis, and the various dirty looks I received while making calls in public can attest to that. 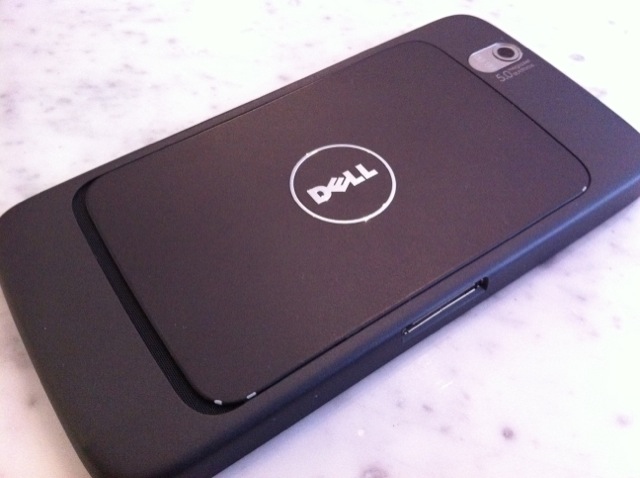