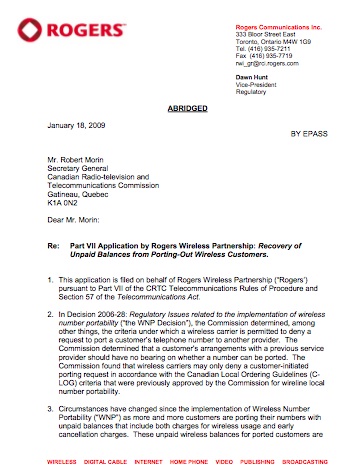 Update: It seems as though Rogers withdrew their CRTC application today. However, read below for bits of the proposed filing.

Yesterday Rogers filed a request to the CRTC that basically is asking for all the carriers to ensure all customer balances are at $0.00 before porting their number to the new carrier of choice. Apparently it’s costing Rogers “millions of dollars each year” when customers comes over with balances.

In the application Dawn Hunt, Vice-President Regulatory for Rogers stated that “Rogers requests that the Commission order that the new wireless carrier will be responsible for the unpaid balances owed by the wireless customer that the customer fails to pay after receiving their final invoice. This requirement will apply only for wireless-to-wireless ports.”

In addition, the applications says “Circumstances have changed since the implementation of Wireless Number Portability (“WNP”) as more and more customers are porting their numbers with unpaid balances that include both charges for wireless usage and early cancellation charges… Customers porting-out mid-contract with unpaid balances are costing Rogers, and most probably other wireless carriers as well, millions of dollars each year. The task of collecting these unpaid balances is made much more difficult once a customer ports their number to a new carrier as the relationship has been terminated.”

With this news we reached out to the carriers. Bell is currently “reviewing the application” and we’re awaiting a response from WIND. Telus has responded to the Rogers application and has stated “TELUS doesn’t agree with Rogers’ proposal at all. It’s not consumer focused, it’s not transparent, doesn’t promote consumer choice and runs counter to everything we are striving for as an industry”. Even on the Twitter page of Michael Hennessy (TELUS’ Senior Vice President of Regulatory and Government Affairs) said the filing is a “Silly idea”.

So this begs the real question for the filing. If a major carrier like TELUS thinks it’s a silly idea and boldly states they don’t agree. Is the real reason about market share and keeping shareholders happy?

Read the entire Rogers submission here at the CRTC (PDF)