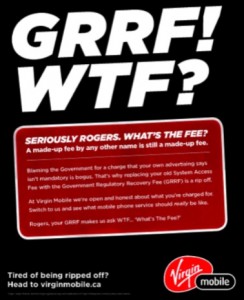 We thought the Globalive foreign ownership issues was Canada’s version of a wireless soap opera!

It turns out it’s not and the surprising and almost awkward battle between Virgin Mobile and Rogers Wireless flamed up this morning with Virgin’s latest ad campaign hammering down the recently introduced Rogers “Government Regulatory Recovery Fee”, or in short the GRRF. Virgin’s tag line said “GRRF! WFT!… seriously Rogers. What’s the Fee?”

Sir Richard Branson himself stated “I’d like to congratulate Rogers for removing one fee that never made sense, but I’m perplexed to hear that they’ve replaced it with another equally confusing one. I suppose that they hoped by putting ‘Government’ in the title that people would assume the fee is legitimate. It clearly states in Rogers’ own advertising fine print that ‘It is not a tax or charge that the government requires Rogers to collect.‘ Are they deliberately trying to mislead the public?”

Rogers has never been one to sit back and just take it. Rogers spokesperson Keith McArthur stated “We’re flattered that Sir Richard Branson is paying such close attention to Rogers from his home in England. But the fact is that Bell – Virgin’s parent company – is the only national carrier still charging a system access fee for new customers. Who is Bell trying to kid here?”

Stay tuned for the next episode.