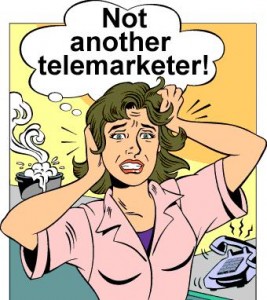 If you are one of the 6.7 million who have signed up for the National Do-Not-Call List (DNCL) you must read this story. BIG eye opener. Michael Geist, professor at the University of Ottawa, has written a remarkable insight into why the DNCL could be coming to an end.

It’s well known that the CRTC has received a great amount of criticism for the DNCL by actually selling the list to outside companies, Canadians were getting more calls rather than less. Some organization are exempt under the list such as political parties, charities etc… however, Geist did some digging around about the NDCL and found a list of companies that have downloaded the do-not-call list:real estate agents, car dealers, financial advisers and lawn-care companies. That’s right… for us who signed up for the list to be protected have actually been sold.

Apparently the CRTC receives over 20,000 telemarketing complaints every month. More interesting is who manages the complaints first… not the CRTC, but Bell. You guessed it, an organization who’s in business to make money off consumers manages a government driven initiative. Where do our tax dollars actually go then?

So Bell has the final word on which complaints are real or not real. Geist says “In December 2008, Bell reported only 32 valid do-not-call complaints, while dismissing 2,748 complaints as invalid. In November 2008, there were 44 valid complaints as opposed to 3,981 complaints dismissed as invalid”. The complaints that Bell deems as a real issue then heads to the CRTC for further investigation. To date a total of 70 warning letters have been issued, nobody has been fined the max penalty of $15,000.

Where this story stems from is the recently passed the Electronic Commerce Protection Act, Bill C-27 or the anti-spam bill. This basically protects us Canadians from being bombarded by spammers (including text-message spam). According to Geist, a very important statement was made at the end of the report: “buried at the very end of the 69-page bill, are provisions that lay the groundwork to kill the National Do-Not-Call list… but boils down to the government repealing the provisions that establish and govern the do-not-call list. In its place, the Electronic Commerce Protection Act approach of requiring an opt-in would apply, meaning that Canadians would no longer need to register their phone numbers on a do-not-call list.”

This could be good news but with everything takes time, especially during the slow summer months when the House of Commons takes time off. Industry Minister Tony Clement has plans “later this year” to “review” the DNCL, but what is needed is some clear direction, protection and explanation of why the National Do-Not-Call List has been such a pain… when essentially it was supposed to be in place to make our lives more pleasurable.