Bell released their Q1 2008 results and it seems the business is progressing – especially in the wireless segment with their “best ever Q1 for gross activations”.

George Cope, President and Chief Operating Officer of Bell Canada said “We continued to make operating progress this quarter with a record Q1 for wireless gross activations. We were pleased that the momentum we built in the second half of 2007 in acquiring wireless subscribers continued this quarter and that 82% of our net activations were on postpaid rate plans. Customers responded to our offers and our wide array of new full-function smartphones. However, the high level of these activations and increased spending on customer retention and handset upgrades had an impact on our wireless EBITDA growth this quarter”. 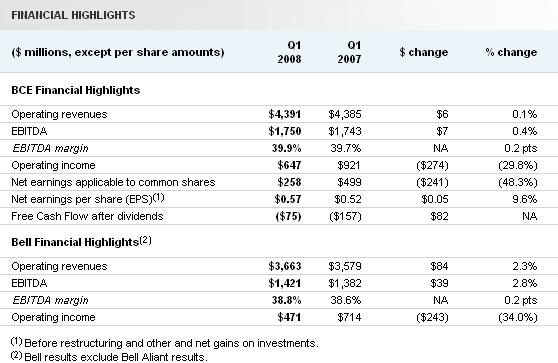