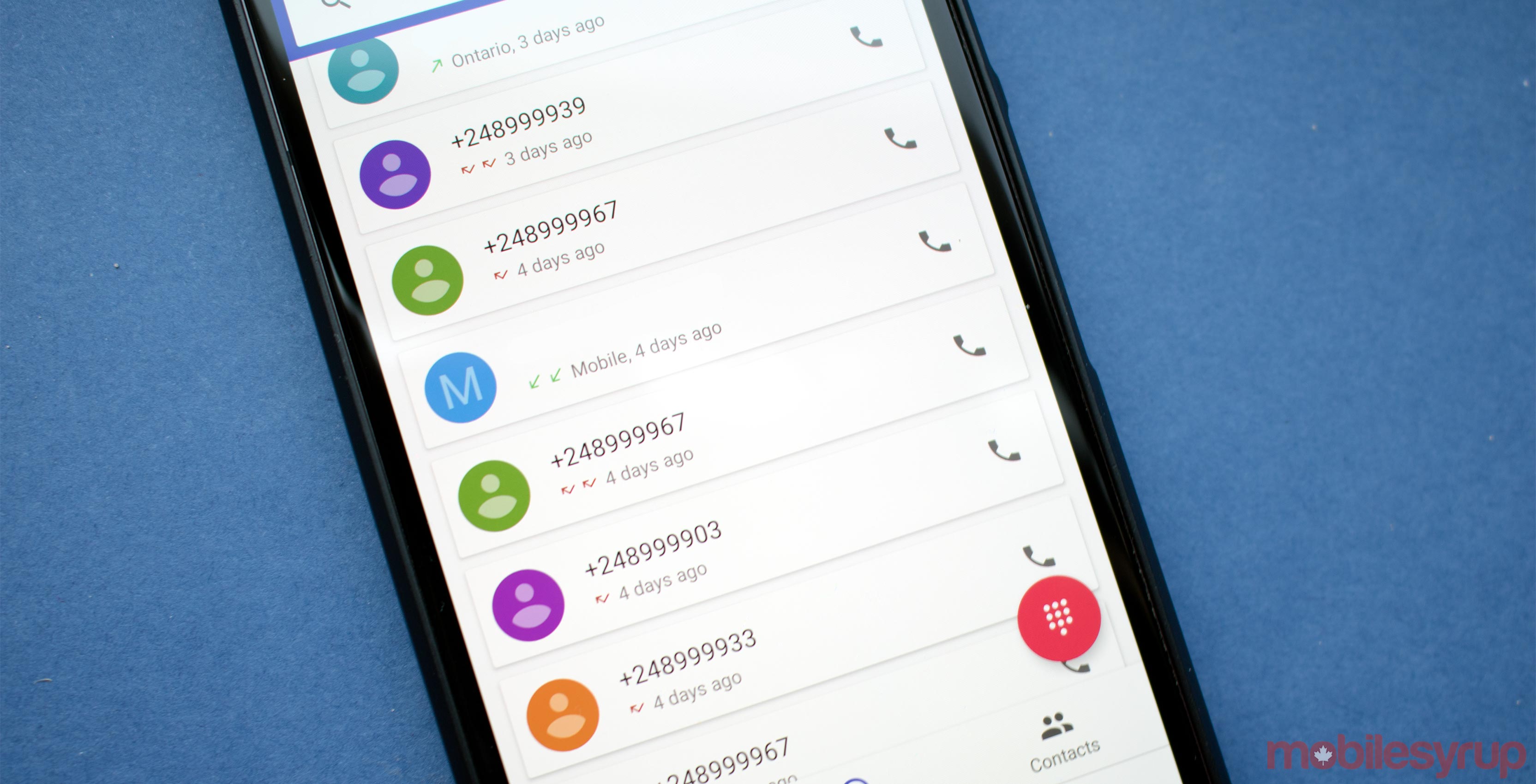 An increasing number of Canadians have reported that they’re receiving a lot of spam calls.

Spam callers have become more sophisticated in their spoofing techniques and have even successfully defrauded some Canadians.

Although this is a useful initiative, universal call blocking only works with malformed numbers, which refers to numbers that don’t comply with the North American Numbering Plan or numbers that have more than 15 digits. This will, unfortunately, not likely work to stop spam calls that come from numbers that appear legitimate.

Important notice: Scammers have been spoofing the OPC’s telephone #, and are asking for Social Insurance Numbers and other personal info. Do not provide this sensitive information! pic.twitter.com/Mfig972sSh

Some spam callers have defrauded Canadians by falsely posing as federal agencies, such as the Canada Revenue Agency or as Citizenship Canada. There have been 297 victims in 2019 so far, which has led to over $1 million CAD in losses.

The Canadian Anti-Fraud Centre has reported that 4,695 people in the country have lost more than $16.7 million to scams since 2014.

☎️ Did you get a voice message that sounds like this: “If we don’t receive a call from your side, please be prepared to face the legal consequences, as the issue of tax is extremely serious and time-sensitive”? IT’S A SCAM! More examples ➡️ https://t.co/0QgRLtYK4W pic.twitter.com/mbmF3aqQ4S

Although the CRTC continues to implement ways to prevent spam calls, such as wanting carriers to introduce a system to trace the origin of spam calls by 2020, there’s no guarantee that the number of spam calls will decrease anytime soon.

Here’s how you can identify and block spam calls using your device’s built-in software or through a third-party app.

The feature silences calls from unknown numbers. However, if you have texted a number or had a phone number shared to you via email, then a call from that number will go through.

Once you turn on the feature, calls from unknown numbers will be silenced, sent to voicemail and appear in your recent calls list. 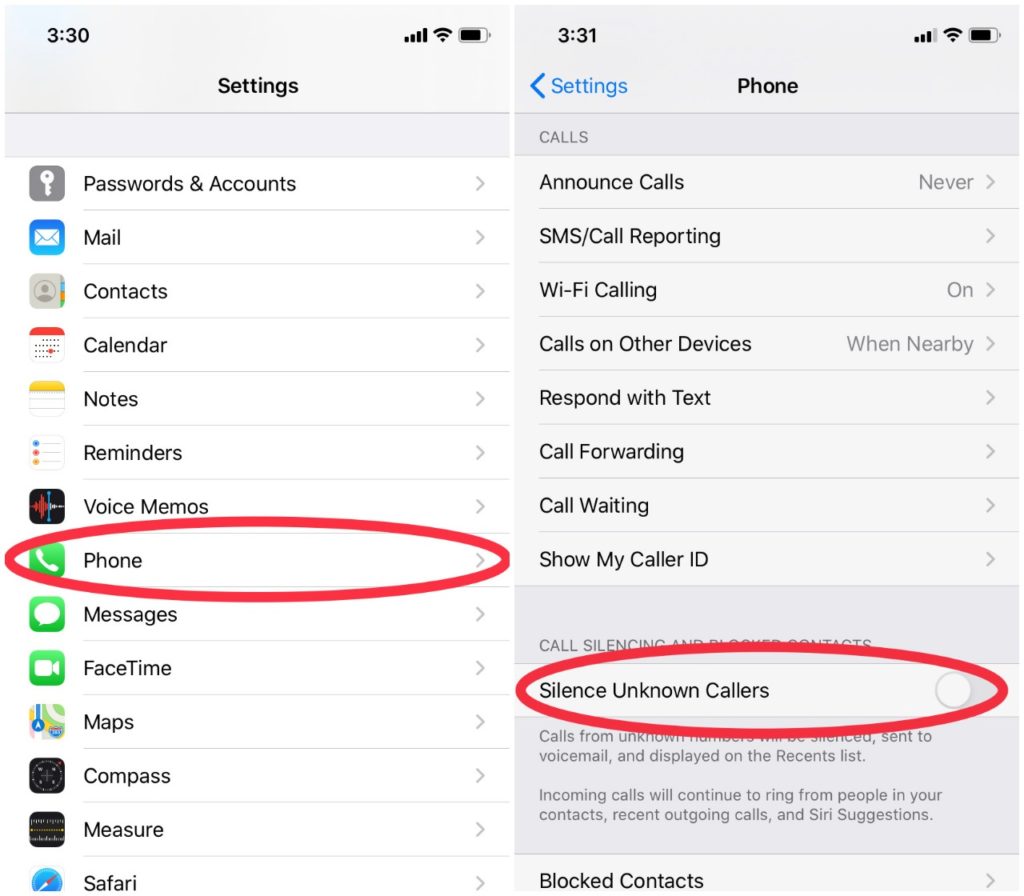 For instance, if you don’t have you doctor’s office’s number saved and they give you a call, they’ll still be able to leave you a voicemail.

Before you enable the feature, it’s essential to save contacts that you wouldn’t want to miss a call from. Although the caller can still leave a voicemail and the call will appear in your recent calls list, you won’t receive a notification of the call.

To turn on this feature, go into your ‘Phone’ settings and select ‘Silence Unknown Callers.’

Android devices have a ‘Caller ID & spam’ feature that is typically on by default.

To make sure that you have the feature turned on, open your Phone app and tap “Settings.” Then you can select ‘Caller ID & spam’ and toggle it on and off. 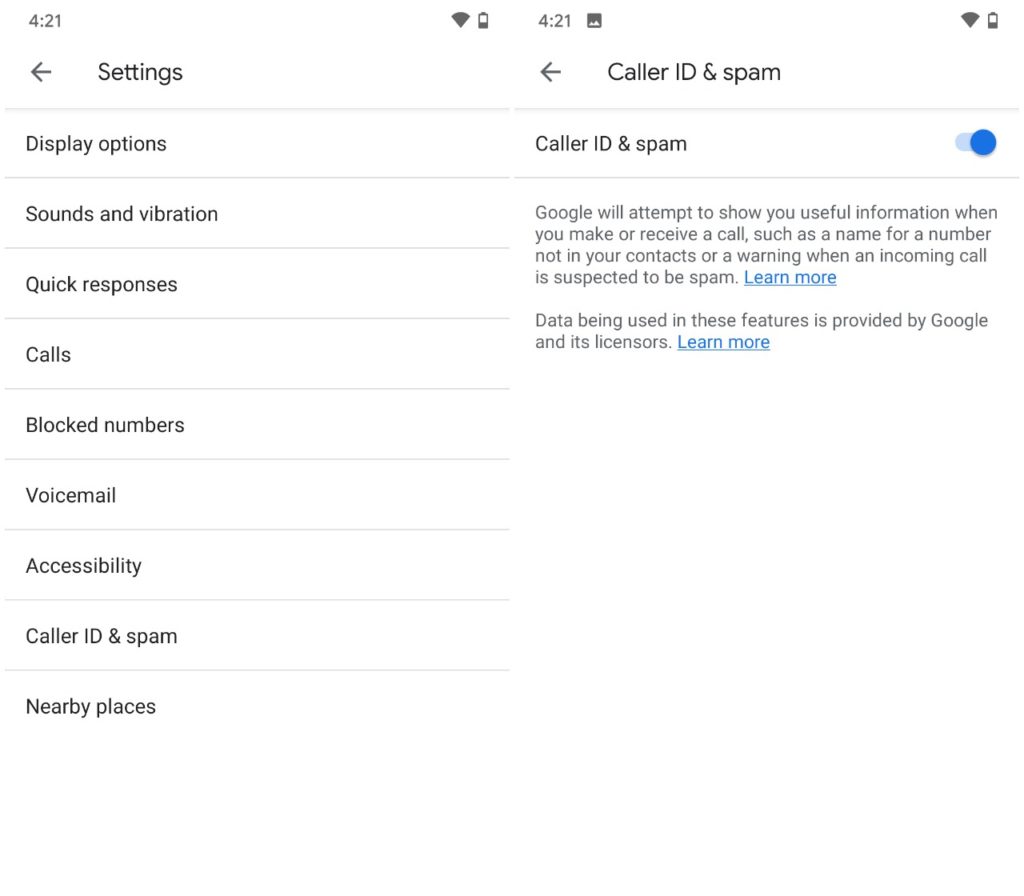 This default feature aims to notify users when an incoming call is suspected to be spam.

Pixel devices go beyond the basic spam detection with a feature called ‘Call Screen,’ which uses Google Assistant to answer incoming calls and transcribe them. The feature is a way for users to combat spam and is pretty easy to use.

Once you receive a call, there will be a ‘Screen call’ option along with the usual ‘Answer’ and ‘Decline’ buttons. 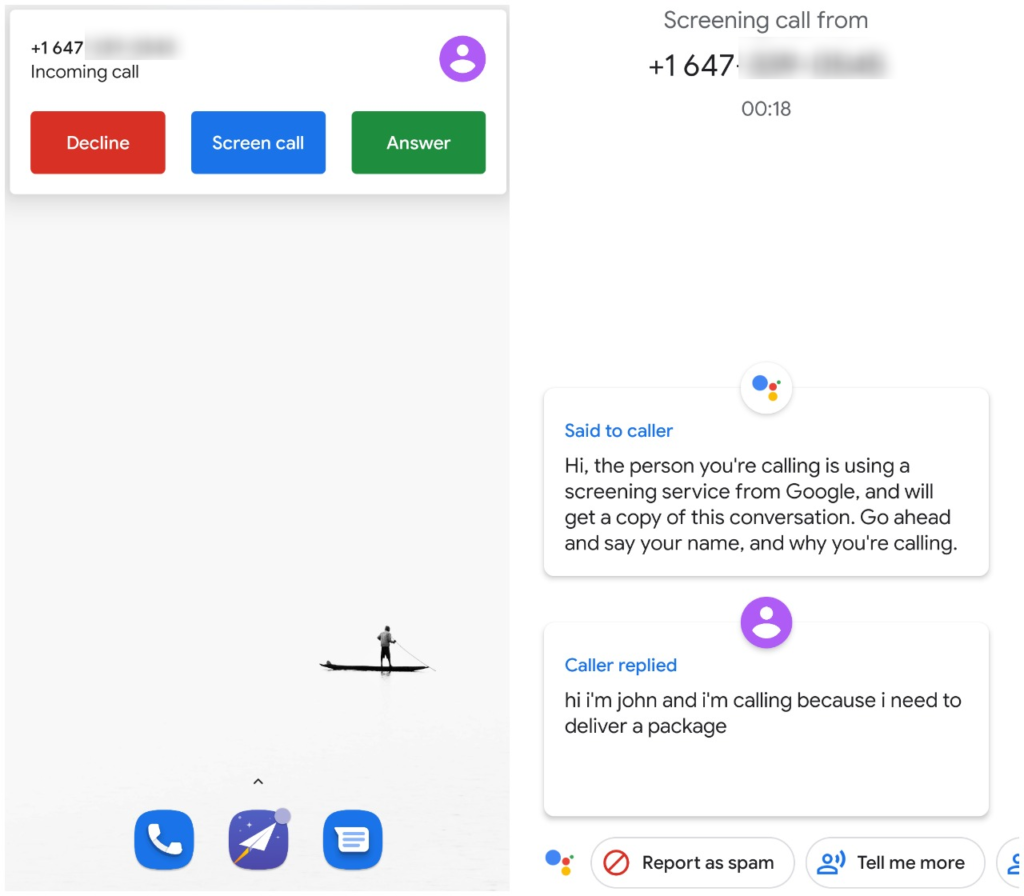 Google Assistant then answers the phone with a typical introduction stating that it’s a screening service from Google, and asks the person why they’re calling you. You’ll then see a live transcript on your screen so you can decide if you want to answer the call or not.

Users can mark calls as spam by selecting the ‘Report as spam’ button at the bottom of the screen. Once you mark it as spam, the report is shared with a database with all other Pixel devices, which helps the service recognize spam and effectively deal with it.

‘Truecaller‘ is a caller ID app that identifies spam calls and text messages and lets you block them. It is able to automatically identify spam and fraud calls before you answer.

Users can also use the app to lookup a phone number and get details about the specific number. The app also has a Block List that you can add numbers to.

For the purpose of this article, I had to simulate a spam call to test the app’s features. To do so, I used a website that lets you place calls to any phone in the world. These kinds of websites are easy to access and could potentially be used by spammers. The app was able to detect that the number was suspicious and issued a warning. 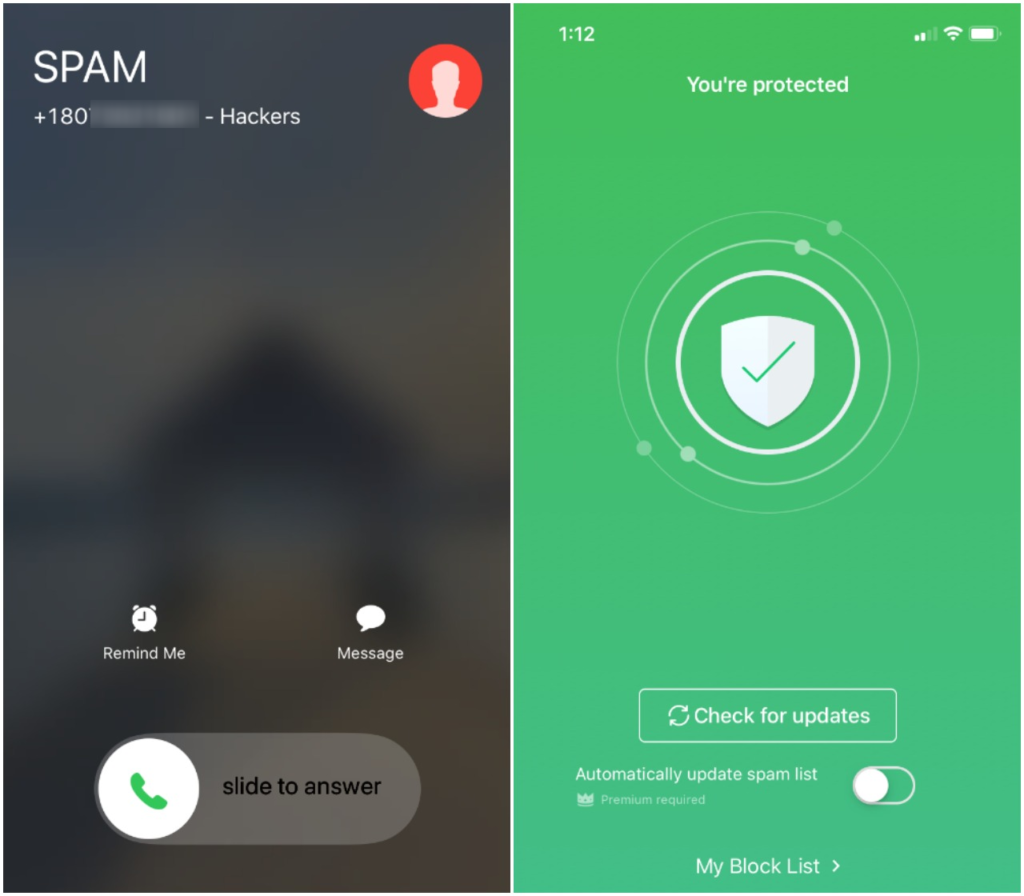 To receive warnings on your incoming calls screen, you’ll have to enable notifications in the app settings to allow the app to notify you of spam calls.

Truecaller is a free app but has a premium membership that removes ads and let’s you know who has viewed your profile. It will also give you a Premium badge on your profile. The premium subscription costs $3.99 CAD per month or $34.99 per year.

Trucaller is available on both iOS and Android.

‘Call-Blocker‘ is a similar app for Android that notifies you if a call could potentially be spam. Once you get a call that the app detects as a possible spam call, you can add it to the block list.

I issued the same test with this app and received a warning that notified me that the call was coming from a suspicious number and was likely spam.

To get the app to work, you have to set it as your default dialer so that it is able to notify you of spam calls on your incoming calls screen. 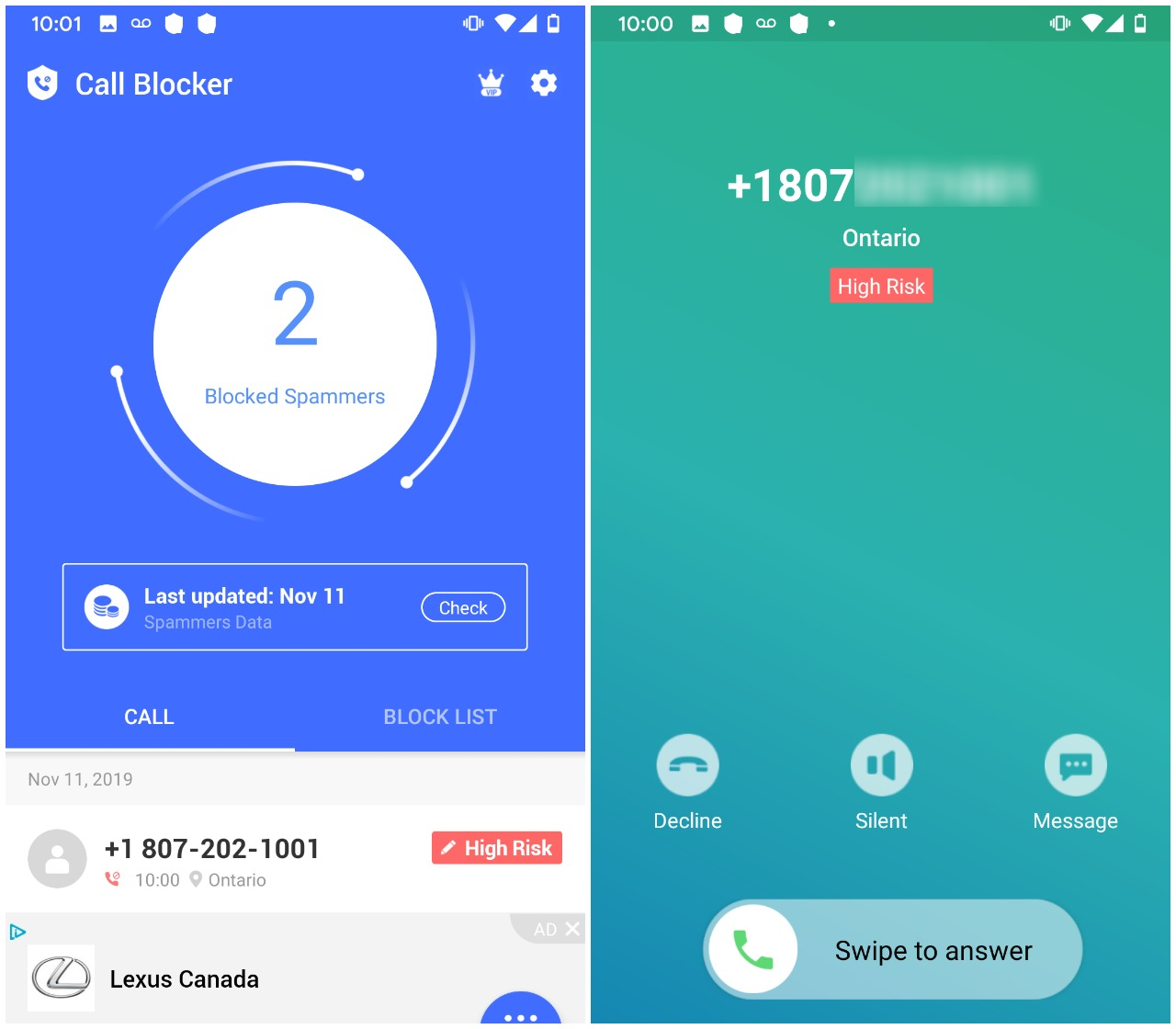 The app is free to download, but has a VIP subscription that gets rid of ads and gives you access to a larger spammers database. The monthly subscription costs $5.49 CAD.

It should be noted that as spam callers get increasingly more clever, no system or software is 100 percent foolproof when it comes to identifying and blocking nuisance calls.

It’s also important to remember the basics, such as never sharing your personal information with a number that you don’t trust or on a call that you didn’t initiate.

If you want to take another step to avoid spam calls, you can register your number for the National Do Not Call List on the CRTC’s website. Doing so will help you avoid receiving calls from telemarketers and other unsolicited callers.

In the meantime, the CRTC is also urging Canadian consumers to file complaints about spam callers by visiting www.lnnte-dncl.gc.ca or calling 1-866-580-3625.