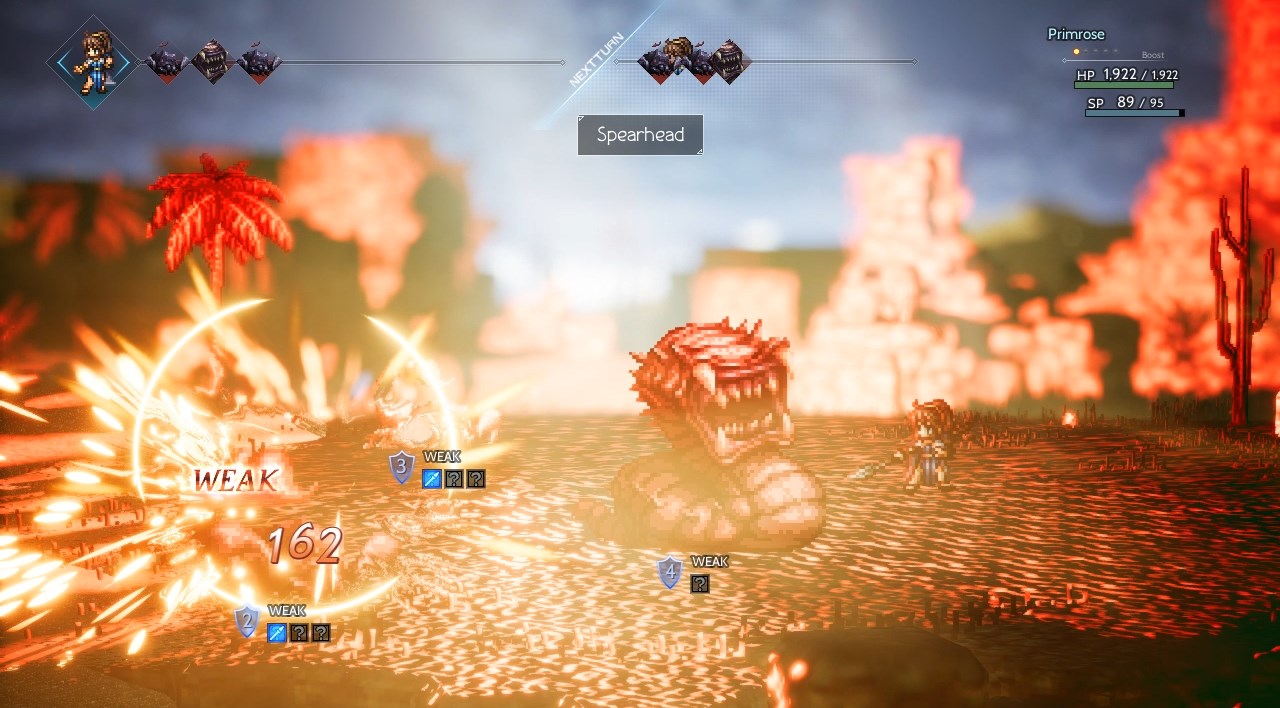 It’s been a long time since I’ve had any interest in a Japanese role-playing game (JRPG).

While I once enjoyed the genre for its compelling storytelling and deceptively deep turn-based combat systems, more recent JRPGs have become too complicated for my taste, after adopting elements more commonly found in western-developed role-playing games like real-time battles and an over-emphasis on graphical fidelity.

There’s that and also the simple fact that I’m at a different point in my life now. I find it difficult to carve out the time to play through a 50+ hour video game experience — that sometimes “gets better after the first 10 hours” (I’m looking at you, Final Fantasy XIII).

This is why Square Enix and Acquire’s Octopath Traveler (originally revealed as Project Octopath), a recently released JRPG for the Nintendo Switch, caught my attention. The game features 16-bit Super Nintendo-era visuals updated with polygonal environments and, at least at the outset, what seemed like a compelling story. 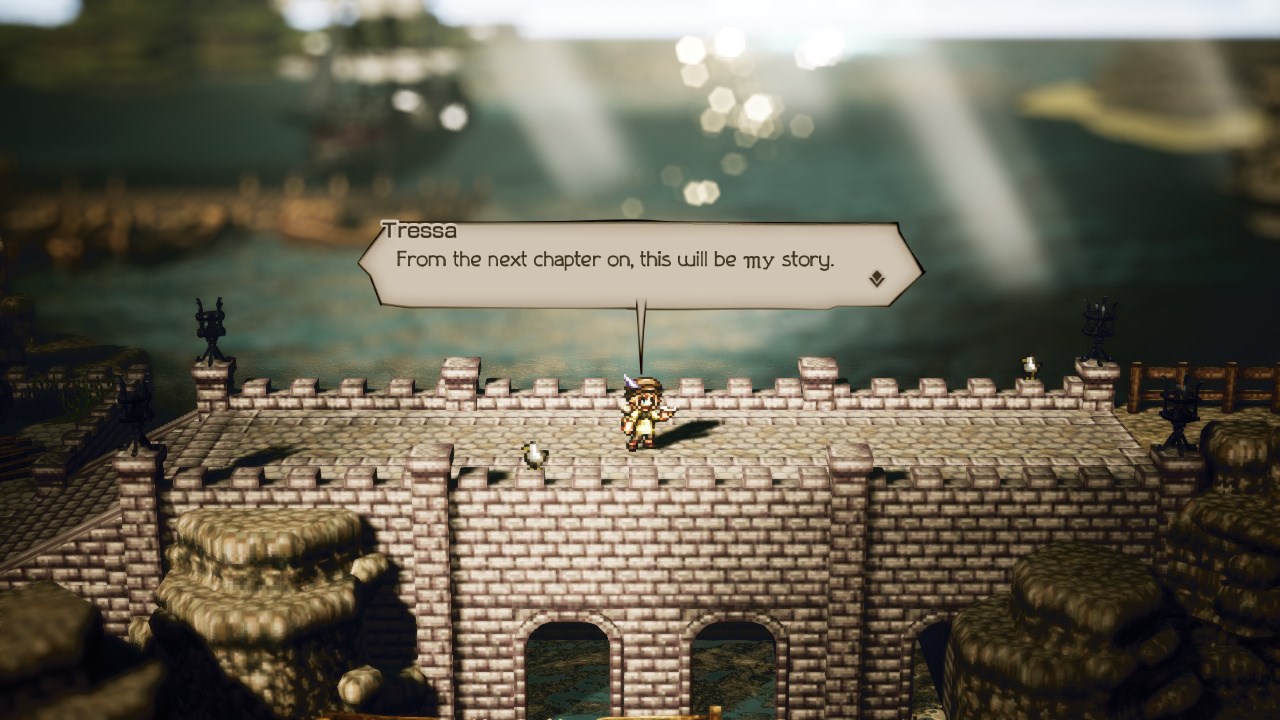 The game satisfies the nostalgic JRPG itch I’ve been craving for the last few years, but also has a modern twist to it, with quality-of-life improvements like ample save points and stores for purchasing integral items. Unfortunately, perhaps due to my unrealistic expectations for the game, Octopath isn’t the second coming of Final Fantasy VI I’ve been dreaming of since 1994.

If you can get past this fact, though, there’s still a lot to like about Octopath Traveler. 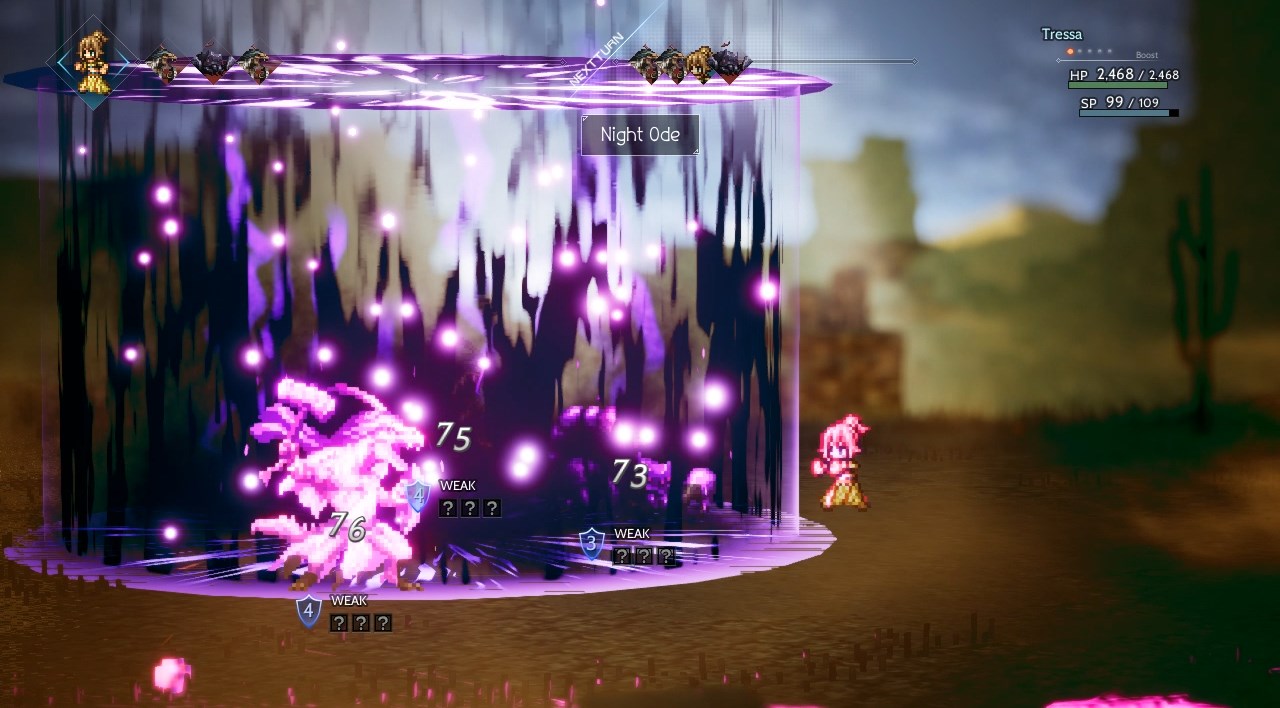 At this point, I’m roughly 20 to 22 hours into Octopath Traveler, and while I haven’t quite finished the game, there are many positives so far. The title’s classic turn-based combat system is a nostalgic joy, returning the JRPG genre to a classic time period where combat was simple but tactical.

As you may have already guessed, the game is a joy to look at. Octopath Traveler‘s 16-bit-inspired character sprites, items and other objects in the environment clash wonderfully with the game’s slightly higher-resolution, polygonal backgrounds, resulting in a unique look that truly makes the game stand out. 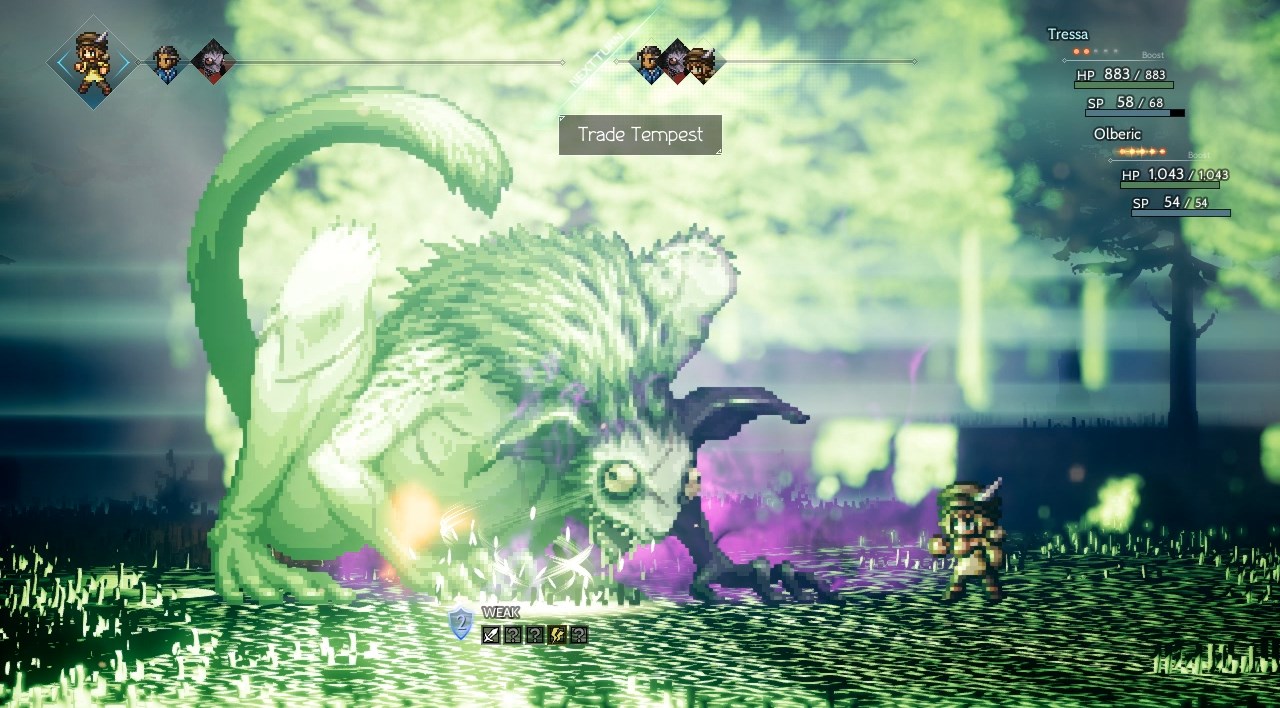 Further, without going into the intricacies of Octopath‘s branching story, some characters are far more interesting than others, with Primrose Azelhart, a dancer, and Tressa Colozone, an enterprising, young merchant, being the two standouts.

With this in mind, Octopath features six other characters with distinct, but not nearly as compelling, stories. It’s also important to note that as far as I’ve been able to tell, these individual tales don’t converge in any cohesive way leading up to Octopath Traveler‘s finale, with will be disappointing for anyone who is a fan of Final Fantasy VI‘s branching yet heavily linked narrative. 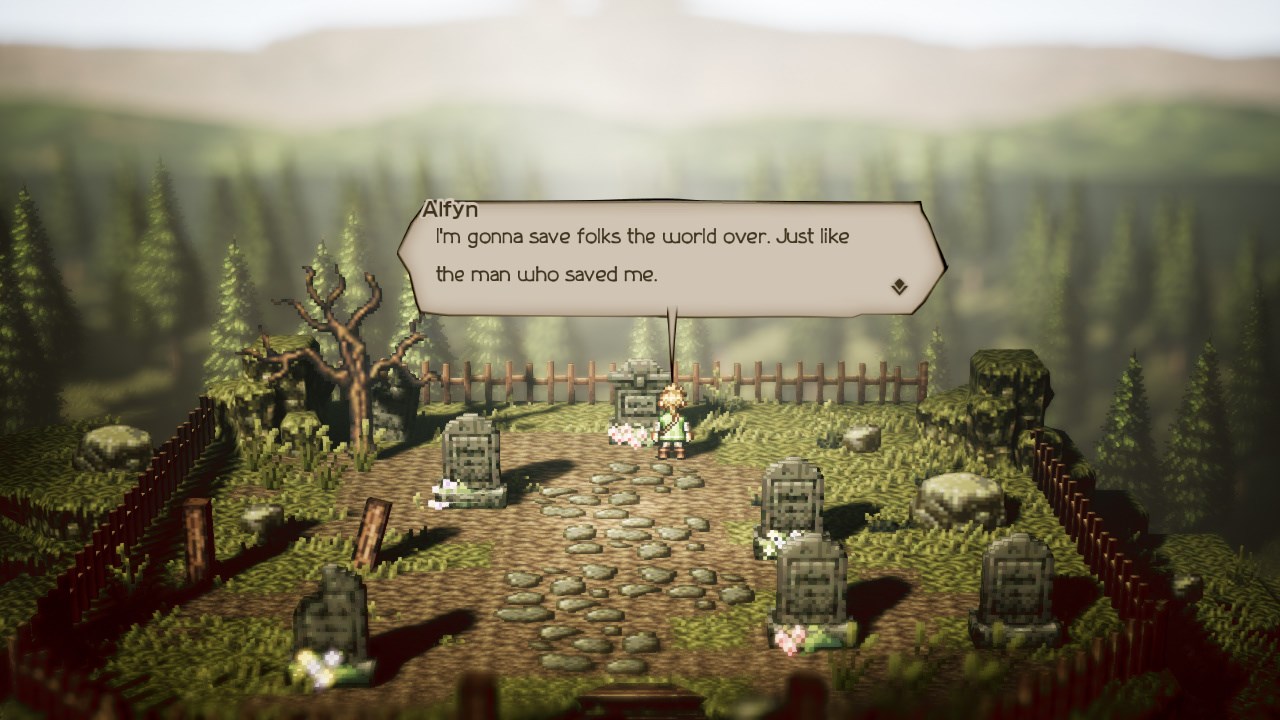 That said, despite not every character holding my attention in the same way Primose and Tressa have, what I’ve experienced so far of Octopath Traveler‘s story is great, though it is far from groundbreaking.

Where Octopath truly falters is when it comes to variety. Every chapter, with just a few exceptions, plays out nearly identically and follows the same rhythm. You watch a cutscene, explore a town, enter a dungeon that’s simple, streamlined and doesn’t feature many puzzles, fight a boss — then you do this all over again for a grand total of eight times. 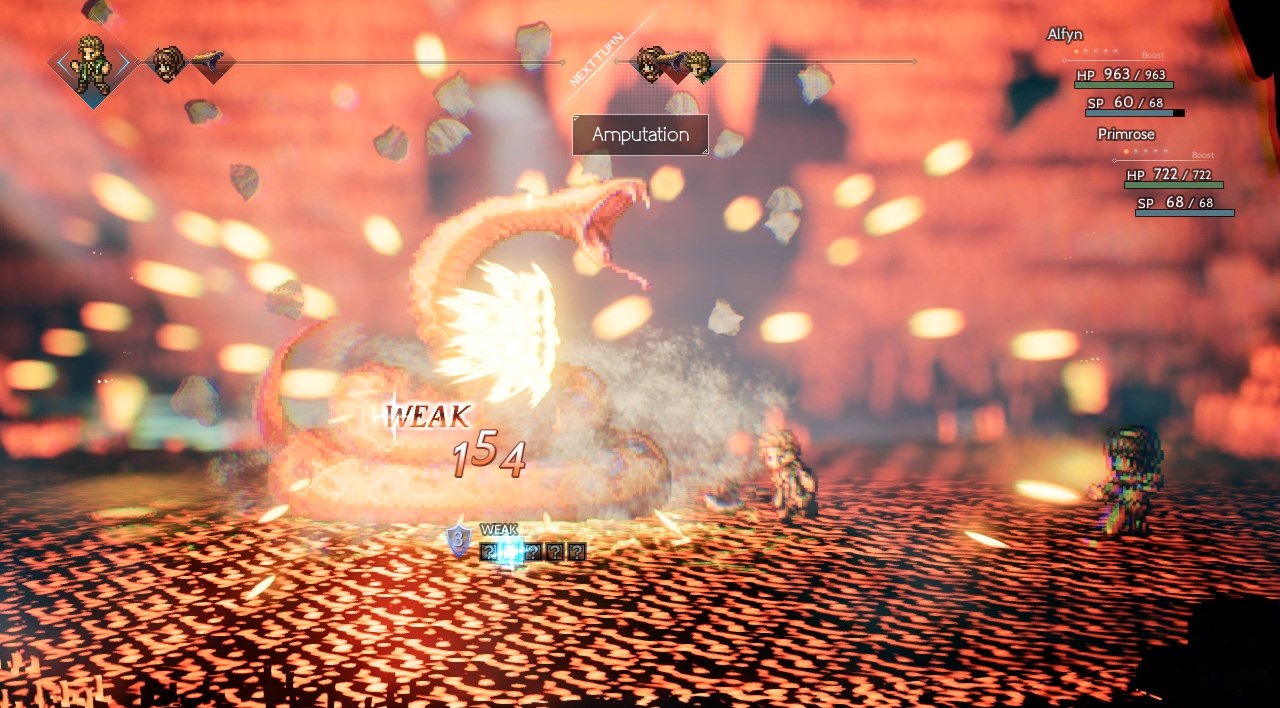 It’s worth noting that this monotony doesn’t completely ruin Octopath Traveler, but it does remove almost any surprises from the game. Some of my favourite memories of playing JRPGs over the years are when something unexpected occurs. For example, the part of Final Fantasy VI when the world ends continues to be etched into my memory as one of my favourite moments in a video game.

Perhaps my expectations were too high, but there’s unfortunately no moment in Octopath Traveler — at least not so far — that comes close to matching that feeling.

There are other strange things that I’ve encountered in the game, too. For instance, you can’t talk to every NPC in the game. One of my favourite parts of 16-bit RPGs was walking around towns and learning more about the game’s world and characters. In Octopath, only specific characters speak to you, with there being no way to interact with the majority of NPCs. While a minor gripe, this is a bizarre decision for a game that is obviously aiming to recapture the magic of retro JRPGs. 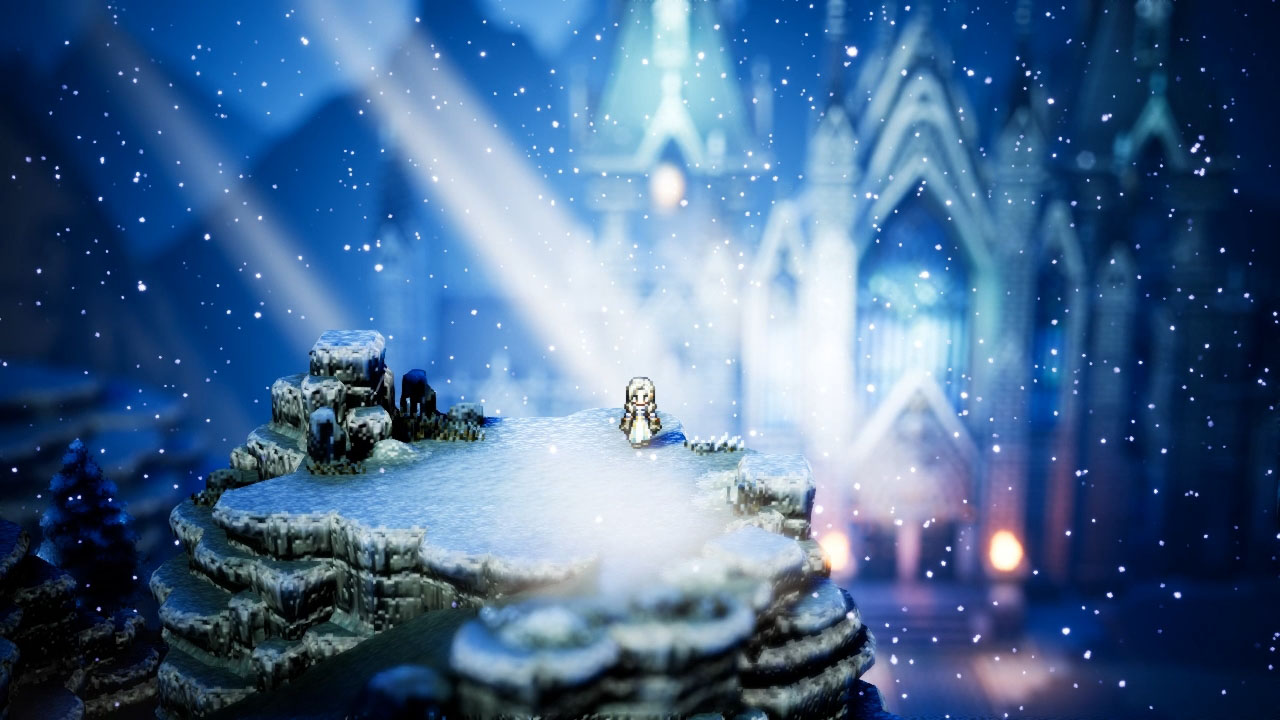 With all this in mind, Octopath Traveler still has many strengths. The game’s soundtrack is excellent, it’s visually breathtaking at times and the story, despite being disconnected, is still compelling for the most part. Further, while the game’s side missions amount to little more than basic fetch quests, they’re an entertaining diversion from the Octopath‘s repetitive core story structure.

For me, while Octopath Traveler may not be the reimagining of Final Fantasy VI I’ve been waiting for, it’s the best retro-inspired JRPG I’ve ever played.

Octopath Traveler is available exclusively for the Nintendo Switch.

Each week, MobileSyrup‘s ‘This Week in Gaming’ column takes a look at a recently released console or PC video game outside of the typical iOS and Android mobile space.