Bell Media is encouraging at least some of its employees to file submissions to the Canadian Radio-television and Telecommunications Commission (CRTC) showing support for the carrier’s FairPlay initiative, according to a corporate email obtained by University of Ottawa law professor Michael Geist.

In a tweet Geist sent out yesterday afternoon, he says the email was provided to him by a source.

“Help stop online piracy and protect content creators,” reads the missive (pictured below). “You can let the CRTC know you support FairPlay Canada.” 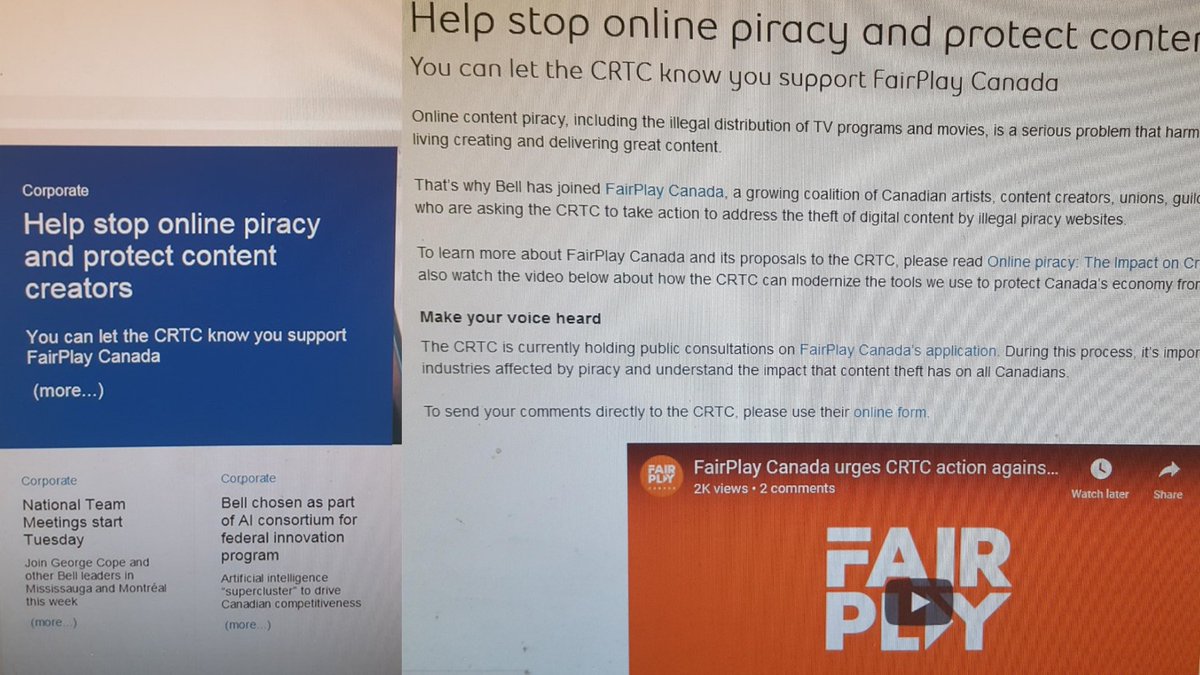 In the message, Bell states its case for FairPlay, as well as instructions on how employees can submit their thoughts on the initiative to the CRTC.

The CRTC is currently holding public consultations on the matter. On February 16th, the commission extended the deadline for comment after the Canadian Internet Policy and Public Interest Clinic (CIPPIC) filed a letter requesting additional time for interested parties to provide their thoughts on the initiative.

Of course, this is not the first time Bell has mobilized its employees in this way.

In 2015, Canada’s Competition Bureau fined the company $1.25 million for encouraging some of its employees to post positive reviews of its App Store and Google Play apps.

In a follow-up post, Geist notes that only one of the more than 5,200 submissions sent to the CRTC list Bell as their company affiliation. In addition, he says none of the materials he was able to obtain suggest Bell is instructing employees to disclose their affiliation to the company.

“All Canadians can provide their views on the website blocking proposal, but corporate encouragement to employees to participate in regulatory processes on the company’s behalf may raise the kinds of concerns regarding misleading impressions that sparked the Commissioner of Competition to intervene in 2015,” writes Geist.

Bell, along with more than 25 other media organizations, including Rogers, the CBC, Quebecor and Corus, launched FairPlay Canada on January 29th, 2018. The non-profit organization is calling on the CRTC to establish an organization called the Independent Piracy Review Agency (IPRA), which would identify websites engaged in content piracy. Further, the organization wants the CRTC to direct telecoms to block these sites.

MobileSyrup has reached out to Bell, asking the company to comment on the email. We’ll update this article once we hear back from the company.