A recently uncovered patent reveals that Microsoft is working on yet another foldable smartphone. In this particular case, the patent is described as being related to a “portable device with adjustable optical arrangement,” though its unclear what that means exactly.

Apparently the handset features unique functionality that allows it to switch from a standard to a wide-angle lens.

When opened wide, the device features one wide-angle rear-facing camera. When closed, that handset’s camera conforms to a narrower field-of-view.

According to the patent, the smartphone serves as a front-facing and rear-facing camera with multiple field-of-views. It would also allow the device to be thinner, avoiding the issue of a foldable handset not being thick enough to feature a multi-purposed camera. 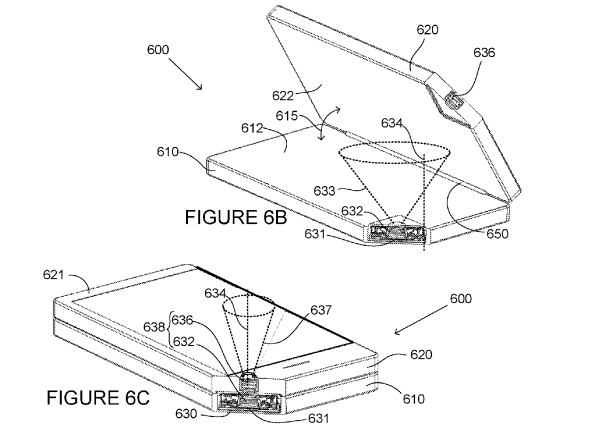 The camera may also be arranged side-ways, utilizing a mirror that pulls in more light from the outside, similar to periscope, says the patent.

The specifically reads as follows:

The rumoured device is referred to internally at Microsoft as Andromeda, according to reports, and features a design that reminiscent of the unreleased Microsoft Courier.

As always it’s important to point out that a patent filing doesn’t necessarily mean a product is going to ever exist.

The full patent is available here.