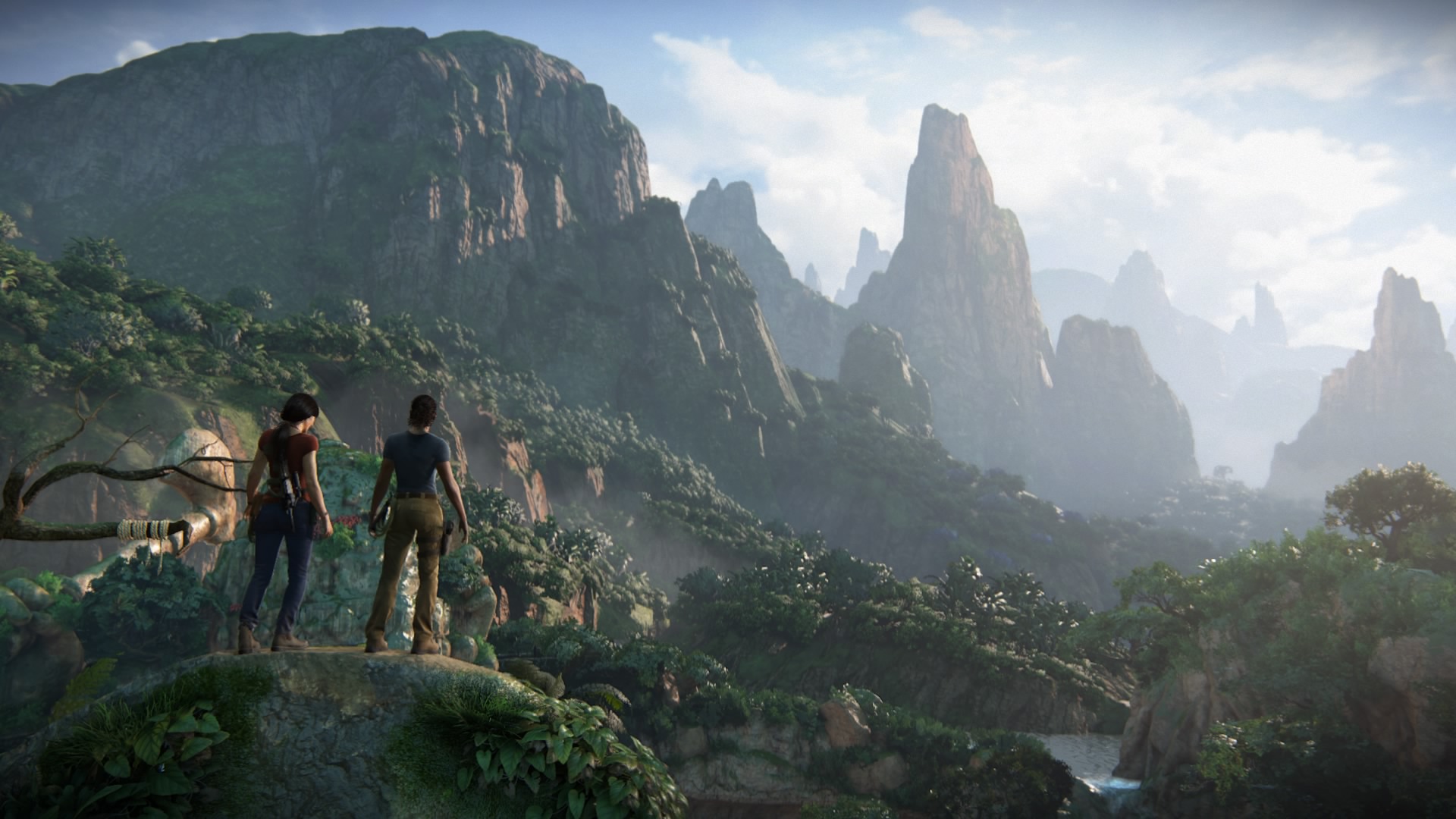 Following the ever-charming hero’s excellent sendoff in last year’s Uncharted 4: A Thief’s End, 2017’s standalone game The Lost Legacy focuses on previous supporting characters Chloe and Nadine as they journey across India to find the mystical Tusk of Ganesh — all the while fighting with a ruthless rebel military group.

Many interviews for the Lost Legacy have already covered how the team wanted to play around with a set of characters besides Nathan Drake, as well as delve into the conflict that would arise between such radically different lead heroines. Based on my playthrough of the game, they were certainly successful on this front, with the unlikely pairing of Chloe and Nadine proving to be incredibly endearing. 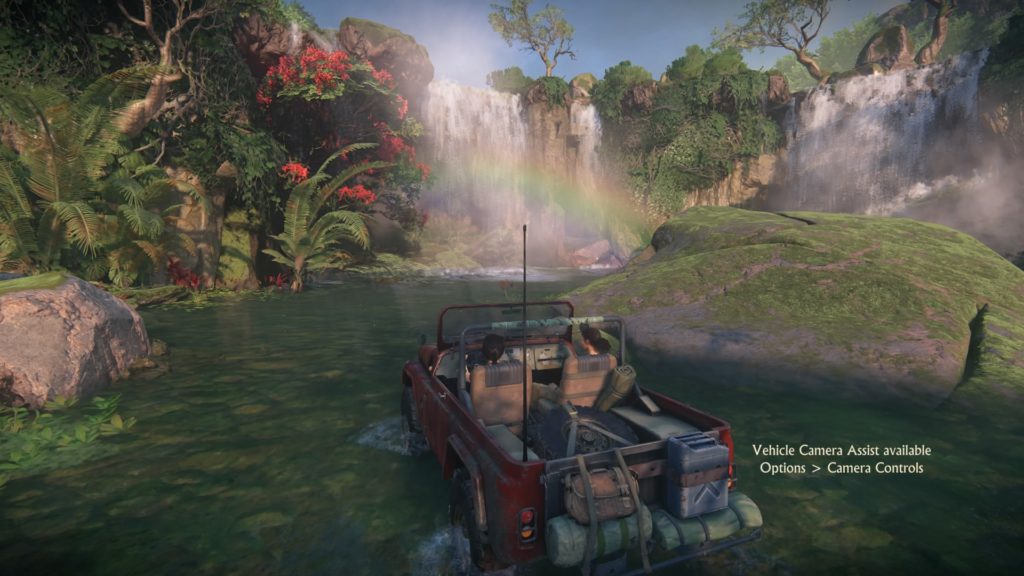 Outside of that, though, the game’s vibrant Indian setting is one that stands out, especially in the day and age of military shooters. With this in mind, I wanted to ask Margenau and Cooper about the inspiration behind the unique and beautiful Indian touches found across the Lost Legacy and the work that went into bringing it to life. Here’s what they said:

Question: The Indian setting and culture surrounding The Lost Legacy is one that’s not often seen in video games. How did you settle on having India in particular as the backdrop for the game?

Margenau: When we set out to make an Uncharted game, the location is always a big consideration. In the past, it’s always been multiple locations, so we always kind of start with the very basic ‘where haven’t we been?’ and there are very few places we haven’t been. We always liked India and the South Asia area, and we saw an opportunity with Chloe’s character, as we settle on the characters first before the location.

Knowing Chloe is half Indian, we thought it would be really interesting and add another dimension to the story by setting [The Lost Legacy] in India where she has more of a history and background with the artifacts and the location. That’s something we’ve never really done before in Uncharted before so we thought, it gives us everything we need in an Uncharted — these great statues and ruins — but it’s also personally related to her, which is a great bit. 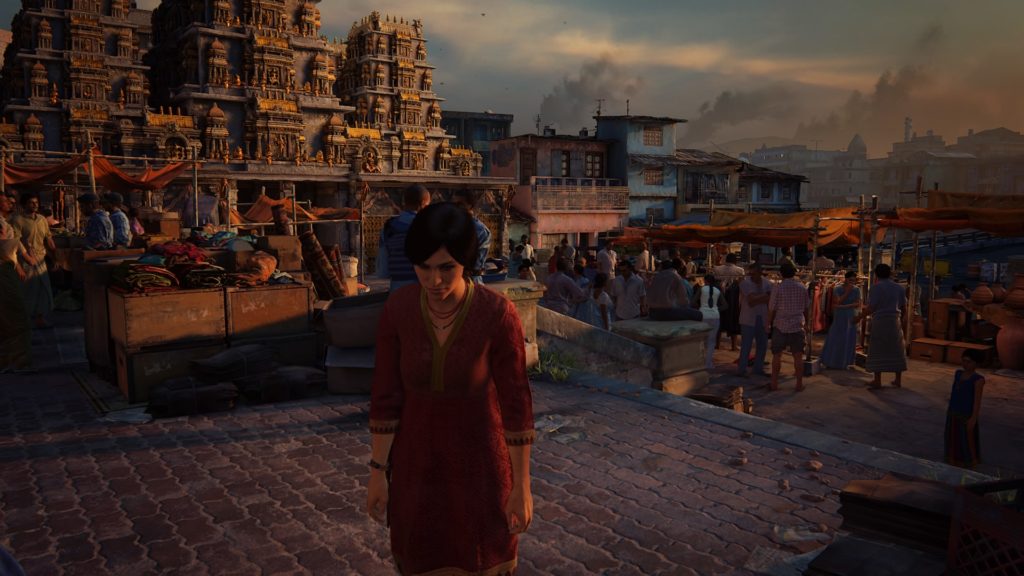 Cooper: It’s also something that, as we started doing the research into the location with the art team and the design team, the more we were looking into those ruins that Kurt was talking about, the more excited we got with, whether it was the sort of mountainous regions and the jungles, the cityscapes as well, it was something that was really exciting to us.

Q: I was watching some [behind-the-scenes] videos of you talking about the development of The Lost Legacy. You mentioned how that you didn’t have as much time for research as you did for other Uncharted games, such as diving into the past of historical figures like Henry Avery [in Uncharted 4] or Marco Polo [Uncharted 2].

Under these limitations, where did you look to for the inspiration and knowledge behind the Indian setting and Hinduism that permeates the game?

Margenau: Talking about Hinduism, a big part of the story actually revolves around stories from Hindu text — we really wanted to weave that into the plot of the game and the puzzles of the game. So, there was research done on Hinduism itself and how rich that culture is and we wanted to make sure we represented it accurately. The Hoysala Empire is the one that we took as the real-world nugget of truth, as a real society and empire that has has real ruins out in the Western Ghats [jungle], which we took from there and ‘Uncharted-ified it.’ [laughs] 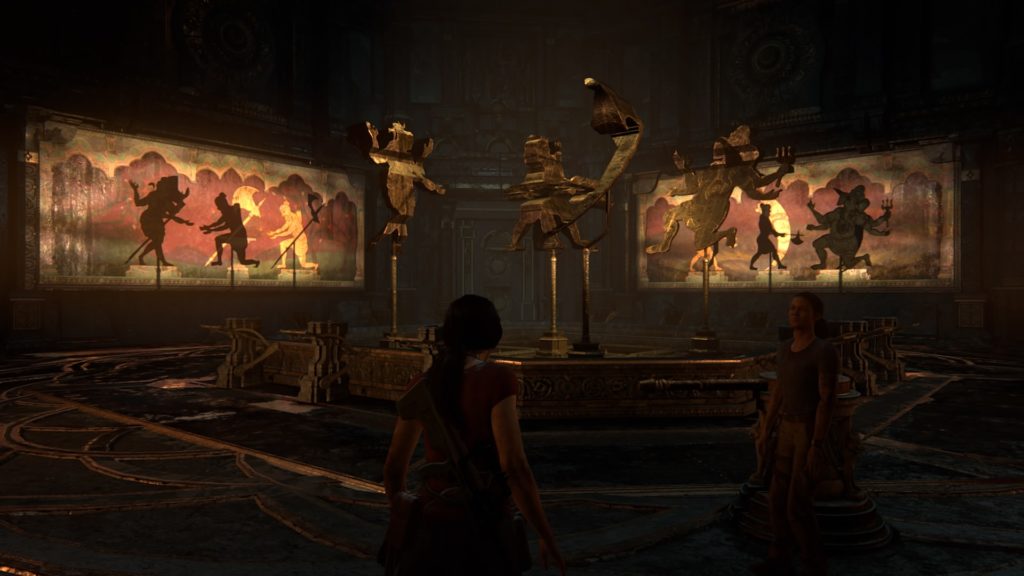 Cooper: With Uncharted, we’ve always had to lean on the kind of fantasy side of reality. So we really wanted to make sure we were being as authentic as we could. We had a consultant that we brought in-house to make sure that we weren’t going to be doing anything that was going to offend anybody, that we were doing everything as legitimately as we could in terms of the history and the religious aspect of that. In terms of the environmental stuff, we still spent a lot of time diving into research and what the reality of what the location is like.

At the same time, we were approaching it from what we wanted to achieve from a design and art perspective. ‘What’s the aesthetic that we’re looking for?’ ‘What are the different kinds of environments that we want to be exploring in the game?’ then sort of fit it into the very different locations in that space, which kind of led to some really awesome kind of variety in the ruins and those jungles we were talking about.

Q: On that note about the environments — clearly the Western Ghats chapter [which is the largest single area in any Uncharted game] is inspired by the Madagascar level in Uncharted 4 with the 4×4 and [those related mechanics].

However, the Western Ghats level is clearly far larger that that, essentially being a miniature open world in its own right. What were some of the conceptual and technical challenges behind designing such a wide environment?

Cooper: [laughs] Yeah, it’s been really challenging across the whole project. It’s interesting that you mention Madagascar, because we thought there were few ideas left on the table after Uncharted 4. We started poking around with the idea of this large, explorable state. When we started working on The Lost Legacy, this was one of the kinds of key things that we were looking at and digging into. 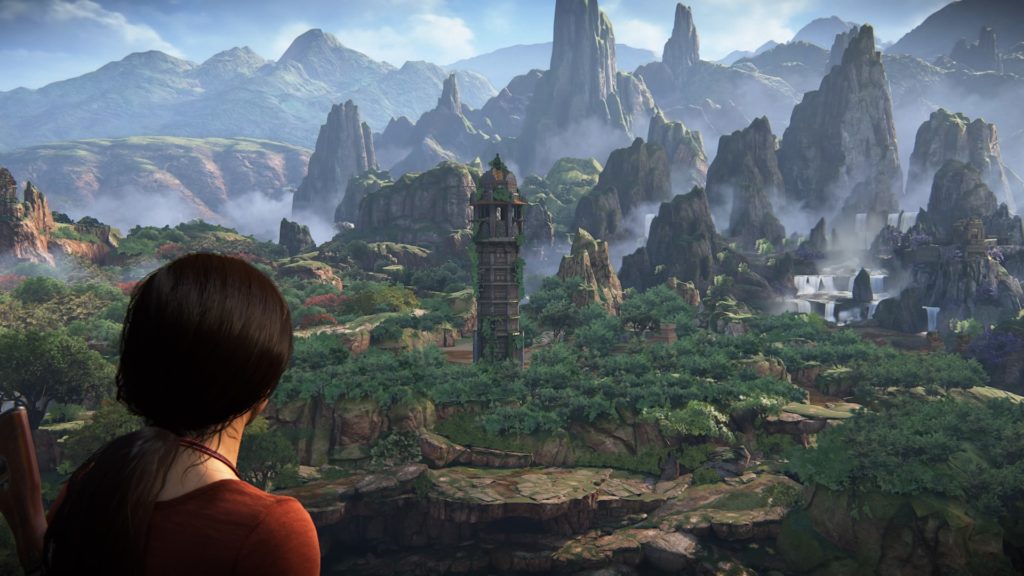 I think from a design perspective, one of the bigger challenges we had was ‘how do we tell a linear narrative in what is essentially a non-linear space?’ We came up with what we felt was a pretty cool solution to that where we give the player the three main critical path goals and depending on which sort of choices the player makes — which of those goals the players decides to go to first, we handed the reins over to the player in making that choice. But the kind of the tore tenants of the story still play out the same irrespective to which choices you make.

Then there’s lots of variety that comes in between those spaces — you’re nudged to the different conversations between Chloe and Nadine and how that evolves as they progress through the story. And making sure that’s always moving on when the player is going forward at his own pace. Technically, it was certainly a challenge in terms of how we build this massive open space and how do we take advantage of everything the PS4 and PS4 Pro have to build this space. There were some headaches along the way, but we definitely managed to get there in the end.

Uncharted: The Lost Legacy is now available exclusively on PlayStation 4 at a cost of $49.99 CAD.