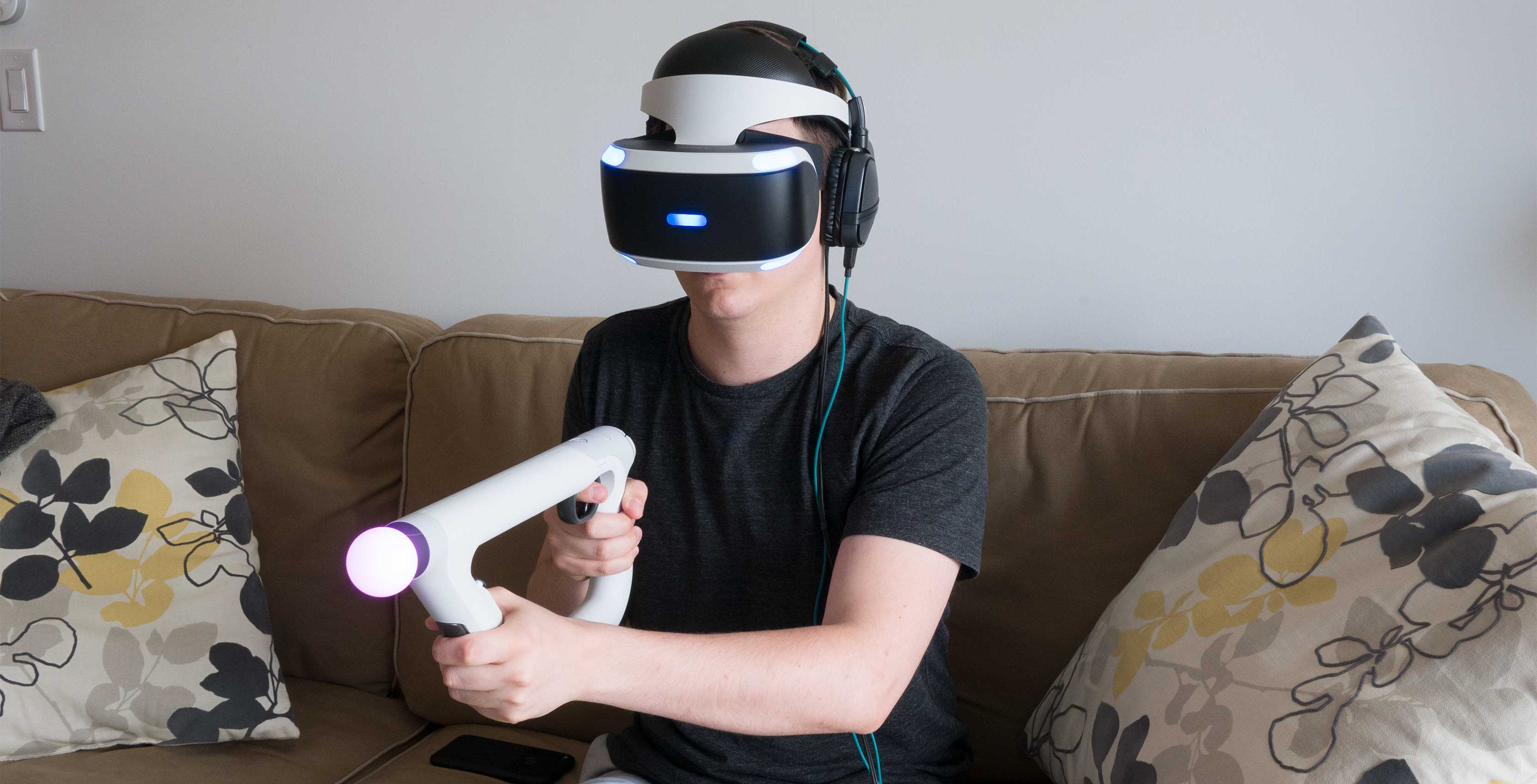 From the moment I tried an early version of the Oculus Rift at E3 a few years ago, I wondered what a first-person shooter (FPS) designed with VR in mind would look like. Farpoint, for better or worse, finally answers that question.

With the help of the surprisingly solid Aim gun controller, Impulse Gear, an independent game studio, has successfully brought the FPS genre to the PS VR, paving the way for developers working on other VR platforms and hopefully translating into more PS VR shooters in the future.

What makes the game different from other attempts at creating a VR Shooter is it has been designed from the ground up for PS VR. There’s also level of polish present in Farpoint that I rarely experience in VR games. This is the only VR game across the PS VR, the Oculus Rift and HTC Vive — other than Resident Evil 7 — that feels like a full-fledged experience and not just an elaborate tech demo designed to show off experimental technology.

While Farpoint is far from perfect and does suffer from a few nausea-inducing flaws, Impulse Gear has created a shooter that takes advantage of virtual reality’s strengths, while also working through many of its limitations in smart ways.

Getting the VR sweats 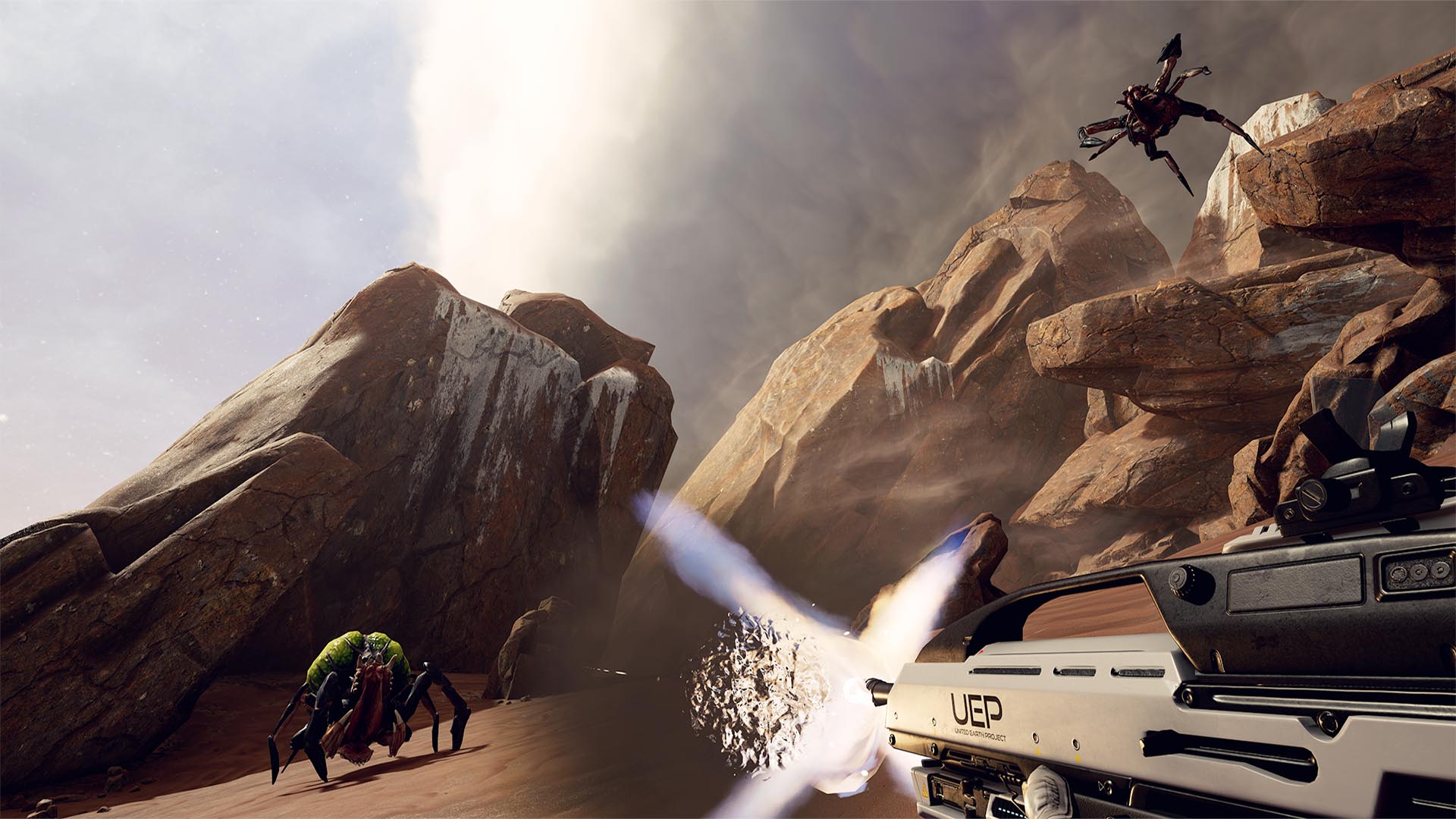 As you may have expected, Farpoint is played from first-person and because the game is built for the PS VR, the player is able to change their perspective by moving their head around, exploring the title’s vast and rocky Mars-like planet. While the game doesn’t look as good as other big budget shooters on the PS4, Farpoint is graphically one of the better PS VR games to date.

Unlike other first-person VR titles, however, Farpoint gives the player control over the direction and speed their character is moving via the Aim controller’s two joysticks. The ratio the character is able to turn can be altered, with each shift causing the screen to quickly flash black as the player’s direction changes.

If you’re familiar with Vancouver-based Cloudhead Games’ ‘Blink’ motion movement controls or have played Resident Evil 7 with the PS VR headset, you’ll be very familiar with this form of VR navigation. There is also a control mode that gives the player complete navigation over their character’s movement, replicating the twin-stick input scheme of a normal FPS — though it made me feel ill in a matter of seconds. 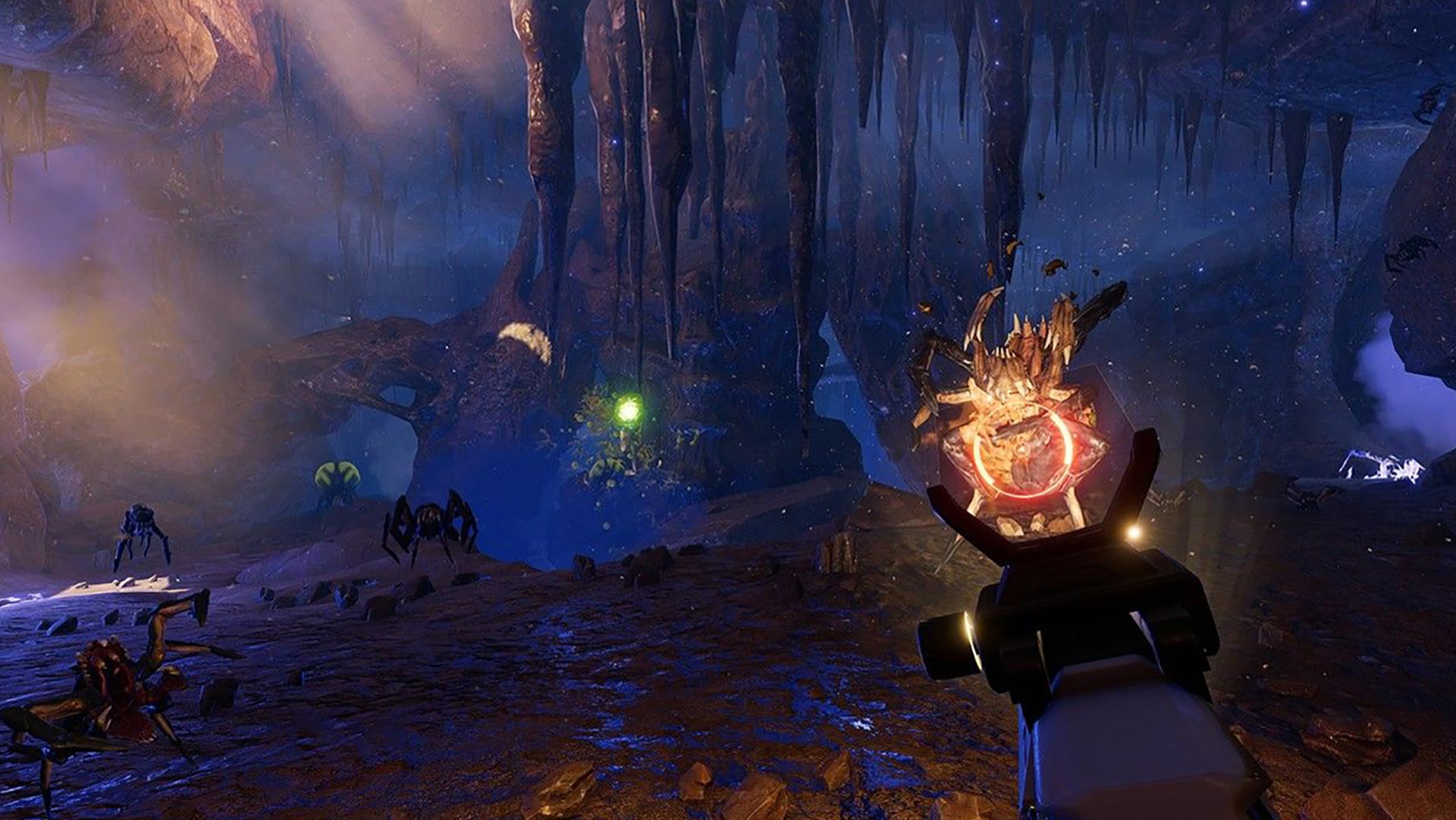 Speaking of nausea, motion sickness or as like to call it, ‘the VR sweats,’ quickly became my biggest problem with Farpoint. While it’s possible to play Farpoint and not alter the direction your character is facing, I found this form of control limiting, especially as someone who is familiar with first-person shooters. I’m able to play Farpoint for roughly 30 minute intervals before I begin to experience minute signs of motion sickness.

First, my body temperature heats up. Next, I begin sweating profusely and in a few short minutes, I’m forced to take off the PS VR headset because I feel slightly sick to my stomach.

When it comes to virtual reality, I’ve always been fine with room-scale titles where I’m actually physically moving around in a virtual space. PS VR however, is only capable of very limited room-scale tracking via the PlayStation Camera. With this in mind, it’s not surprising Impulse Gear has opted for a stationary set-up with Farpoint.

As a result of this — and I’ve experienced similar sensations with other stationary PS VR games — it’s only possible for me to play Farpoint in relatively small bursts (unless I opt to use the mode where I don’t have control over my character’s direction). 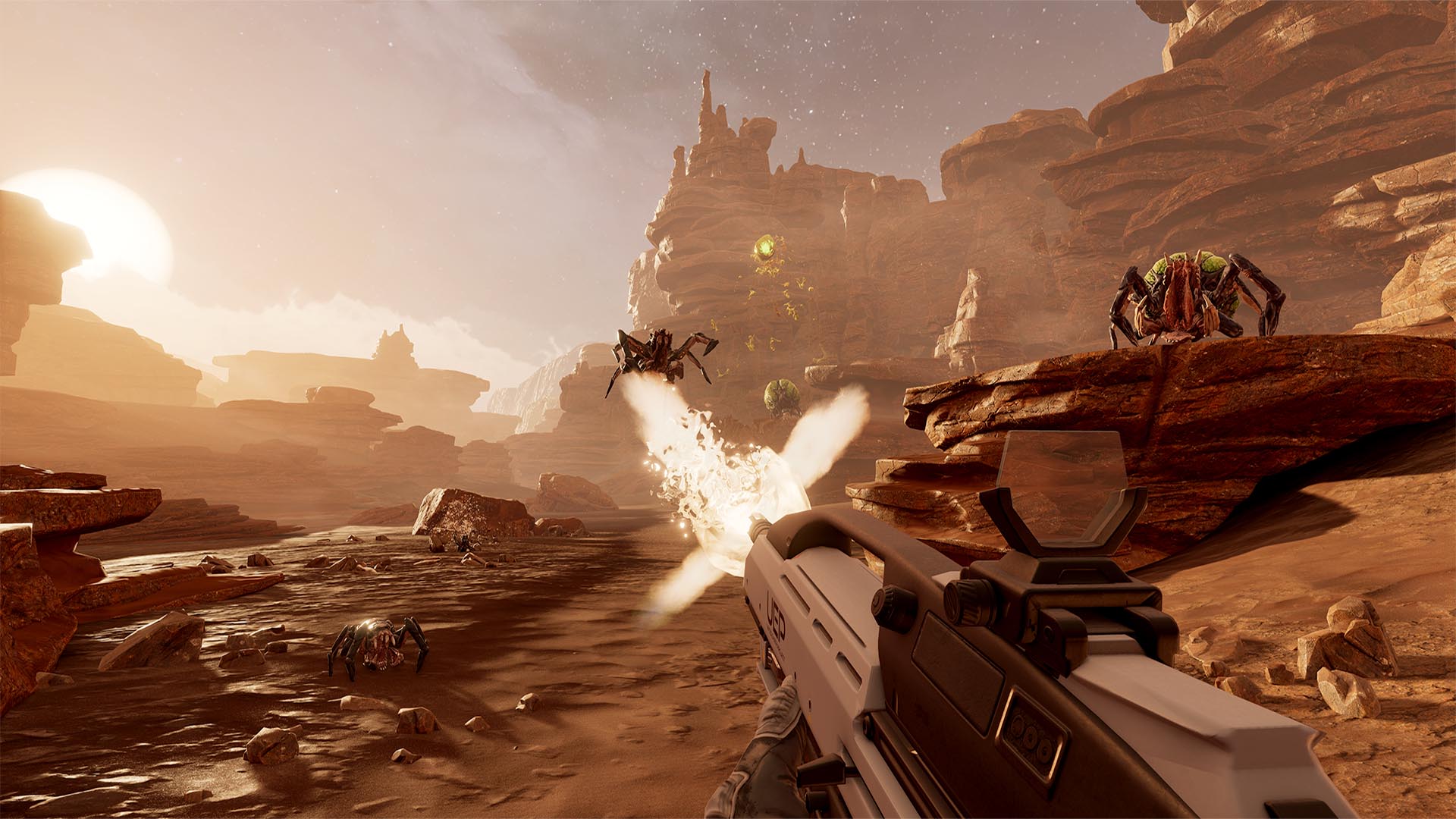 While I’m admittedly only about five hours into Farpoint (I’m very near the end of the game), the title’s various arachnid foes became repetitive after the first hours of the experience. Without giving too much away, each enemy has a specific weakness that the player needs to take advantage in order to easily kill them.

For example, one larger spider-like creature needs to be shot in the rear, causing it to explode, resulting in brief explosion. There’s also a massive beast that can only be taken down with multiple bullets frantically dispensed from a shotgun.

Enemy AI is generally underwhelming in Farpoint, though there is an interesting mechanic in the game where enemies almost always attack from the front. Given PS VR’s limited range of motion — unless you’re playing in a swivel computer chair — this system actually works well and is a great way of circumventing the PS VR’s limitations as a platform, allowing it to be played from a seated position on the couch. 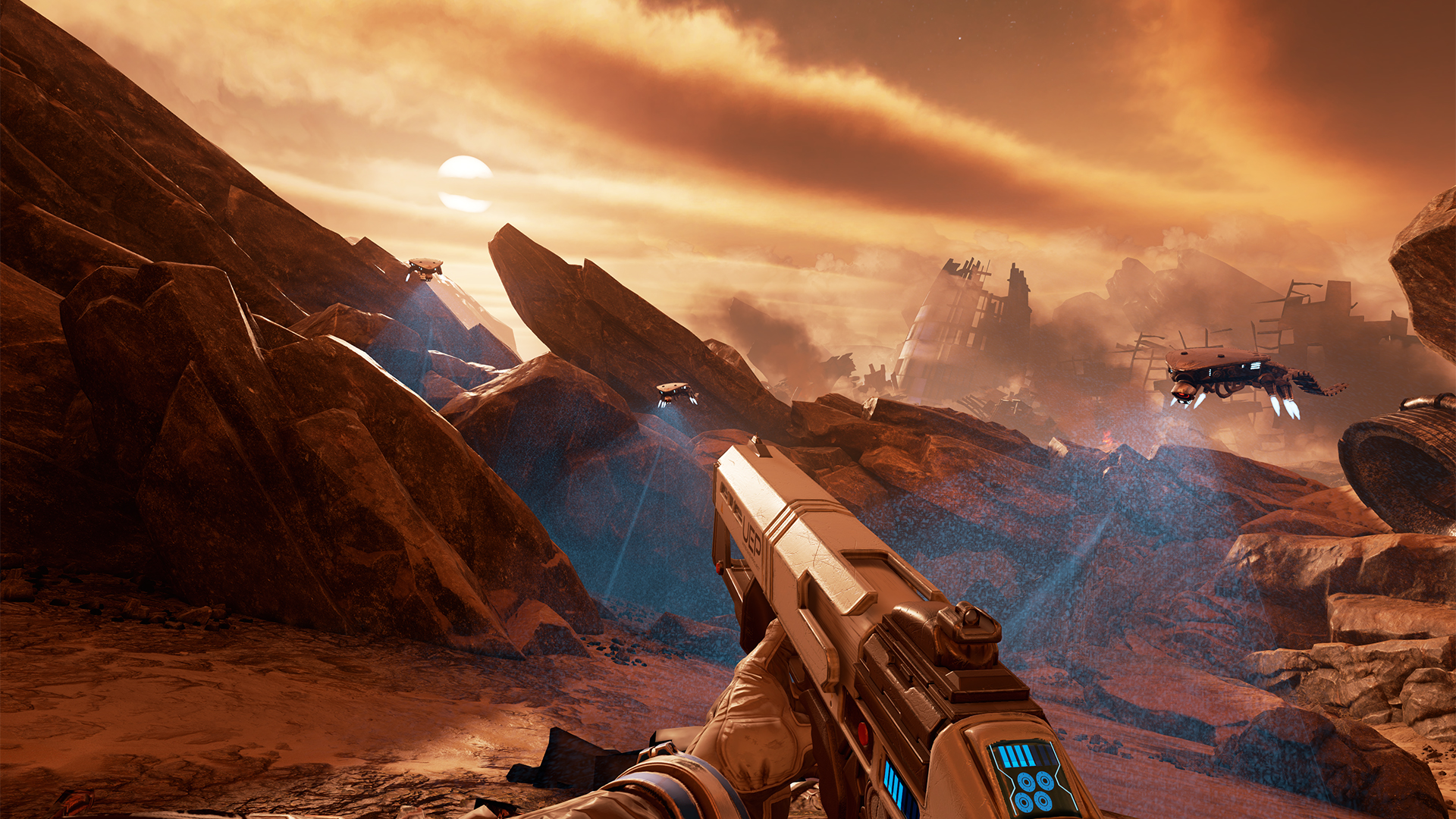 Without delving into spoilers, I’m actually surprised with how compelling Farpoint’s story is. The game follows a group of scientists studying an area of space near Jupiter when a mysterious “rupture” occurs, sending the team and its research facility to an unknown alien planet.

Much of the game’s narrative focuses on the player unfurling the relationship between two scientists through holographic data files found in the game’s world.

The player’s character is separated from the rest of the crew and needs to find other survivors and escape the planet as quickly as possible. In general, Farpoint’s story unfolds slowly, giving the player small sections of story spliced between frantic firefights. 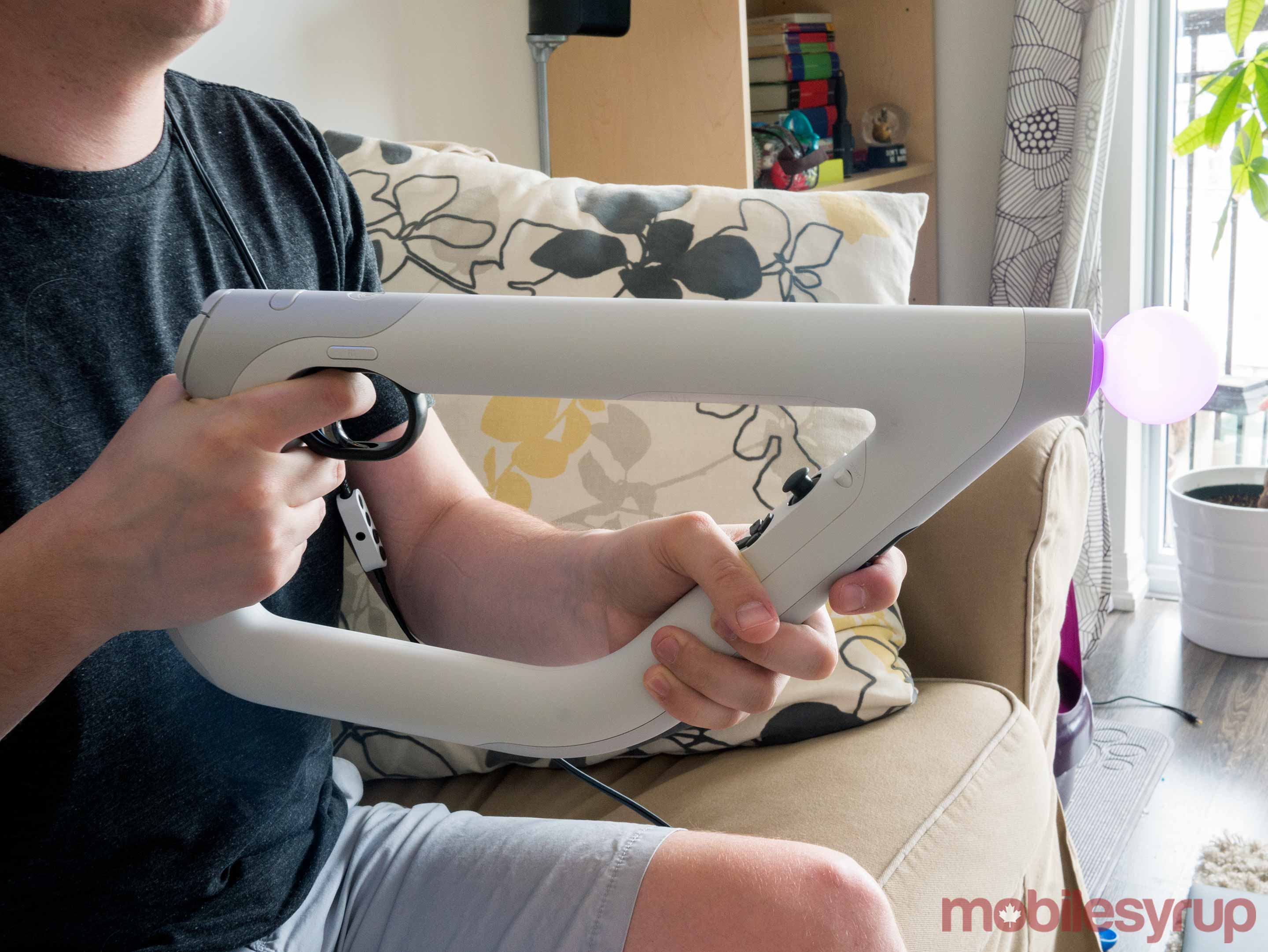 At first glance the gun gamepad likely won’t seem impressive to everyone. Its white and grey plastic isn’t flashy and it also doesn’t appear very functional at the outset. In some ways, the Aim controller reminds me of an upgraded version of the Wii’s Zapper, which was primarily used with the generally not very good version of Goldeneye 007 for Nintendo’s console, as well as Link’s Crossbow Training.

This impression changed as soon as I actually started using the Aim controller. One hand grasps the end of the gun, holding it in place in order to access the front-facing trigger buttons and the analog stick, which allows you to move forward in Farpoint. The back handle is used for the Aim’s primary fire trigger and is also where the secondary analog stick is located. 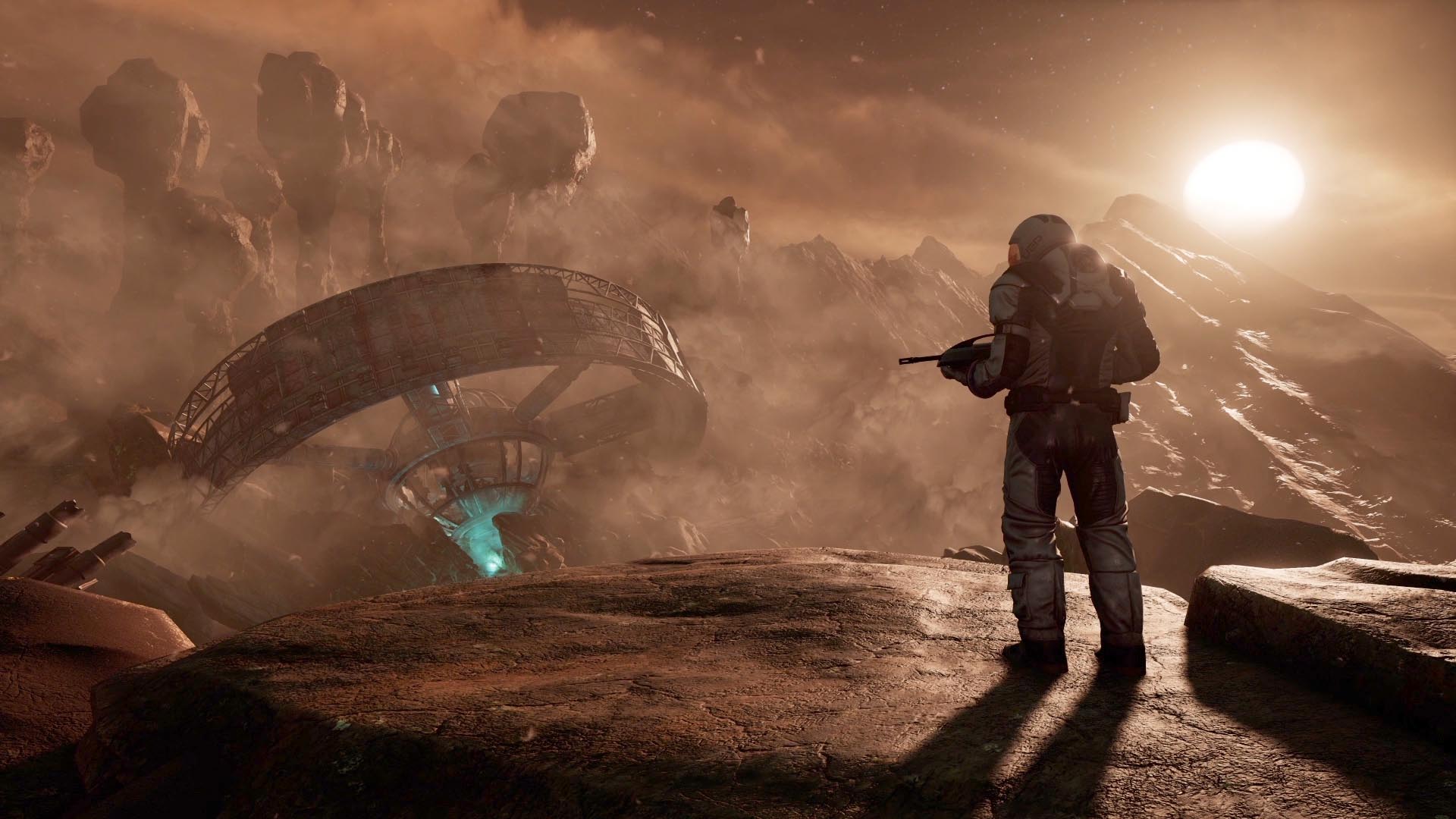 Farpoint features a skill-based challenge mode and surprisingly even online multiplayer, a feature not many VR developers include in their titles. While I’ve only played through a few missions in co-operative multiplayer, the experience was relatively solid. Players are able to move through portions of the game’s single-player campaign co-operatively online. Character models, however, are disappointing and while avatars feature full-body tracking, only arms and legs move accurately (even then the animation is wonky).

Small touches like the ability to look down the sights your virtual weapon by holding it in front of your face in VR, go a long way towards creating an immersive experience. In general, the Aim is an impressive accessory and the best motion-tracking gun I’ve ever used with a home video game console.

Farpoint is far from perfect and the nausea I experienced while playing the game is a serious issue that could prevent many people from enjoying what is otherwise a genre defining virtual reality title. Still, when the game works, the VR experience it offers is so immersive that I often forgot I was sitting in my living room, holding a plastic gun and wearing a PS VR.

Instead, I was on a strange planet, battling what felt like a never-ending onslaught of human hungry giant spiders. In the end, isn’t this level of immersion what VR is all about?

Farpoint is set to release on May 16th for $99 CAD bundled with the Aim controller and $64.99 on its own. The game can also be played with the DualShock 4, though I didn’t get a chance to try this control method out.